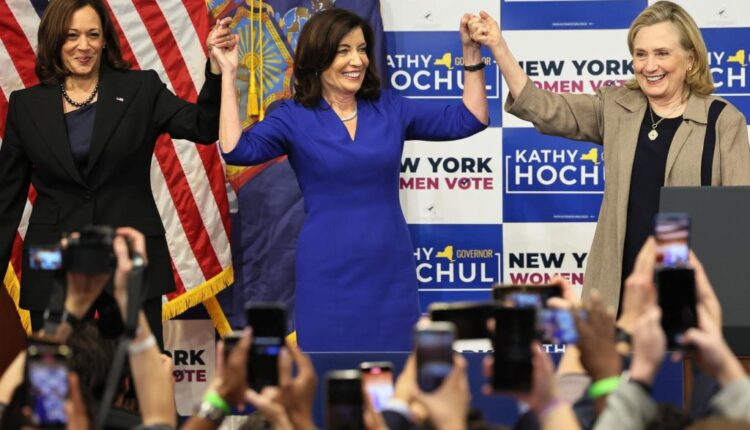 What are Democrats doing to avoid getting drowned by a “red wave” next Tuesday?

They’re rolling out the oldies. Bill Clinton, Hillary Clinton, and Barack Obama are back on the campaign trail.

But the nostalgia tour is only serving to remind voters how far the Democratic Party has fallen.

Bill Clinton didn’t even try to disguise the ugly truth at a stop in Hurleyville, NY, for congressional hopeful Josh Riley.

“But all this tough talk doesn’t amount to a hill of beans, that the Republicans are making,” he continued in a syntactical tangle perhaps born of embarrassment.

The trouble for Democrats is voters aren’t thinking about beans, they’re thinking about the Democratic Party’s record in office as crime soars and prices at the supermarket shoot to the ceiling.

Voters have little hope and want change. So what is ex-President Obama, the man whose brand was hope and change, up to now?

He’s courting TikTok influencers. Earlier this week he sat cross-legged on a beige-carpeted floor for an interview with a young man hiding under a desk.

Nuclear fallout had not arrived in Mr. Rogers’ Neighborhood — this weird scene was “Under the Desk News,” and the fellow doing the duck-and-cover routine was its host, Vitus Spehar.

Obama took to the show to urge its Gen Z audience to vote. But do the teens and twenty-somethings hooked on this Chinese-controlled short-form video app even remember the Obama years?

TikTok is not exactly known for lengthening attention spans.

Gov. Hochul, fearful of the strides Republican Lee Zeldin has made in recent polls, has also turned to the Democrats’ retirement bench for help.

Hillary Clinton warmed up the crowd for Hochul at a Manhattan rally on Thursday. But the biggest draw of the night was neither the ex-senator nor the sitting governor, but a woman who took the stage to the easy-listening vibe of Bill Withers’ “Lovely Day.”

That laid-back standard was the intro music for Vice President Kamala Harris, who proceeded to show just how limited the Democrats’ message is today.

Harris, like Hochul, placed great emphasis on the Dobbs decision that returned abortion law to the states.

Hochul had claimed that abortion only remained legal in New York because she remained governor — a message that Harris actually undercut by reminding the crowd that law is actually made in state houses, not by governors.

Though she outshines Hochul, the vice president has none of the star power of the ex-presidents who are out on the stump.

Her office rather than her charisma is the draw. Her remarks, delivered in familiar nasal register, mostly touted the national achievements of the Biden administration, with a few mentions of New York issues such as “$100 million for electric MTA buses.”

Hochul joined hands with Harris and ex-Sen. Clinton at the end of the rally, an image evidently meant to inspire the women in attendance.

The party of fear

But Clinton was the woman who cost the Democrats the White House in 2016, and Harris is part of the administration that will soon cost Democrats control of Congress — ominous company for an unelected governor.

Hochul hopes she’ll keep her head above the wave next week.

But her party is already sunk, thanks to its retreat from the relatively tough-on-crime policies of the Clinton days and the hopeful message of Obama.

The Democrats today are a party of fear, even though what voters fear most is not Dobbs or Donald Trump, but more of the crime and misery that Democrats have been giving them.

Daniel McCarthy is the editor of Modern Age

Hochul is keeping voters in the dark on key issues