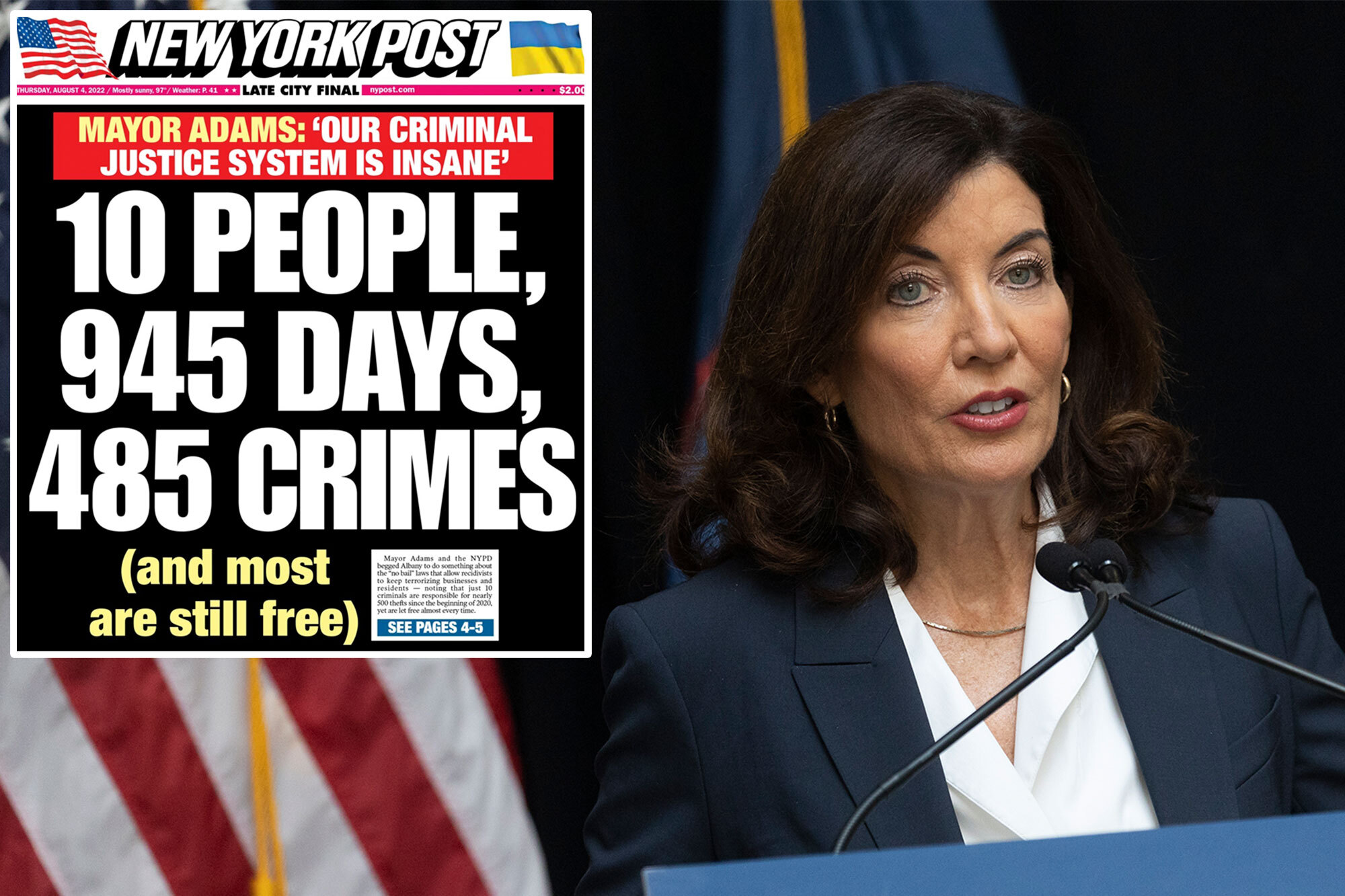 These are the words Mayor Eric Adams accurately uses to describe the revolving door that is New York City’s criminal-justice system.

Major crimes are up a whopping 37% this year, and it’s no mystery why. Time and time again, Gov. Kathy Hochul and Albany legislative leaders fail to address the most glaring deficiency in our criminal-justice system.

Judges in New York do not have what judges in the other 49 states and the federal government have: the ability to remand defendants based on the potential threat they pose — the “dangerousness” standard.

And New Yorkers are paying the ultimate price.

The lack of a dangerousness standard has New York City and the entire state trapped in an endless cycle of violence in which dangerous defendants are released to perpetrate crimes again and again as they await trial.

Last month, a 16-year-old released on two prior arrests — including a weapons-possession charge — brutally attacked a police officer at a subway station and was set free not even 24 hours later. The stunning assault was caught on video.

And this is by no means an isolated incident. More than 80% of defendants busted for gun possession in New York City were put back on the streets this year, Adams said Wednesday. And half of those arrested twice for gun charges were let go.

The system is so broken that a group of just 10 criminals have been able to rack up 485 arrests since bail reform went into effect in 2020, as The Post’s Thursday cover highlighted — and most of these repeat offenders remain on the streets.

But the crime statistics speak for themselves. And just about every day, Adams reports repeat violent crimes perpetrated by individuals who would likely not be on the streets in any other state but New York.

Just one month ago, Hochul called a special session of the Legislature to address gun safety in the aftermath of the Supreme Court ruling on New York’s concealed-carry law. At the time, I penned a letter urging the governor to simultaneously address the absence of a dangerousness standard to help stop the cycle of “Catch, release, repeat.” But my pleas have fallen on deaf ears. Failing to enact much-needed public-safety measures during this special session was a shameful lapse in leadership.

Gov. Hochul and the Legislature did pass 10 laws to close critical gun loopholes regarding legal firearms, which was needed — but 80% of gun crimes are committed with guns obtained illegally.

The state has the most shameful and preventable distinction of having the most cities on the list of the 24 nationwide with the highest numbers of homicides per capita. Four New York cities are on the Center for Public Safety Initiatives’ ranked list: Rochester (No. 5), Buffalo (13), Syracuse (14) and New York City (24). This is completely unacceptable.

In an interview about the need for the special session on public safety last month, Hochul said, “I have a moral responsibility as the leader of this state to do all I can to protect its people.” She most certainly does, and that includes enacting the dangerousness standard. She knows it, as do the leaders of the state Senate and Assembly.

But it seems that they are far more concerned with appeasing the crime-coddling left wing of the Legislature — and seemingly have no problem paying for that appeasement with the lives and the blood of innocent New Yorkers.

That isn’t leadership. Far from it. Real leadership is not about doing what is politically expeditious in the insular, political Albany echo chamber that will play well in the Twitterverse.

It is about spending political capital to do what is needed to protect innocent New Yorkers from the deadly cycle of “Catch, release, repeat.” I renew my call for the governor to convene another special session of the Legislature on crime.

James F. Gennaro, a Democrat who represents District 24 in Queens, is the longest-serving active New York City Council member and was on the council’s Committee on Public Safety from 2002 to 2013.

What Are The Best Car Themed Slots?