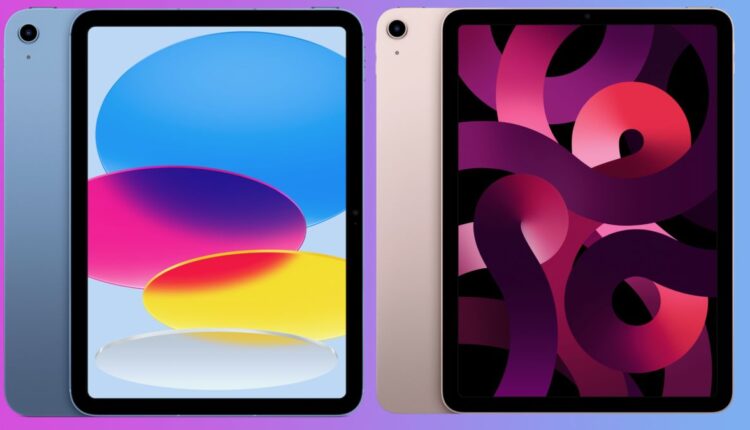 The iPad Air has seen its position in the overall Apple iPad lineup change over time. The first two models arrived as the only regular-sized Apple tablet on the market when Apple (temporarily, it turned out) retired the singular iPad name after four generations. Meanwhile, Apple placed the third iPad Air version, launched five years after its predecessor, between a (revived) singular iPad and iPad Pro, where it continued to sit in the lineup when both the iPad Air 4 (2020) and iPad Air 5 (2022) were released.

When it comes to an iPad Air 5 vs. iPad (2021) comparison, you can quickly see the difference between the two. The former is superior, with better specs and a higher price. Replace the iPad (2021) with the new iPad (2022), and things get fuzzy. The new “budget” iPad is vastly different than its predecessor as it offers better specs and a fresh design. For this, you’re expected to pay much more than the earlier version.

As you can see above, the iPad Air 5 (2022) and iPad (2022) are nearly the same on most points. They both, for example, have a USB-C port and Smart Connector, and each offers Touch ID through a fingerprint identity sensor built into a top button. Both devices offer similar battery life, storage options, and rear camera system.

The most crucial difference between the two iPads is that the iPad Air 5 (2022) contains an Apple M1 chip, while the iPad (2022) includes an A14 Bionic chip. The M1 offers an 8-core CPU with two performance and two efficiency cores, an 8-core GPU, 16-core Neural Engine, and 8GB RAM. The A14 Bionic chip, also available in the iPhone 12 series, comes with a 6-core CPU with two performance cores and four efficiency cores, a 4-core GPU, and 16-core Neural Engine. These differences mean the iPad Air 5 handles things like performance, multitasking, and graphics better than the iPad. Does this mean the iPad (2022) is somehow bad at handling all those things? Absolutely not, and for the average iPad user, it will probably mean very little.

Other differences between the two tablets are more nuanced. For example, both tablets feature a 10.9-inch Liquid Retina display. And yet, the iPad Air 5 is the only one between the two with a fully laminated display with an anti-reflective coating. This means the tablet screen is better protected from the elements and will look better in bright conditions. The iPad Air 5 also offers a Wide color display (P3), which provides more vibrant greens and reds than the traditional sRGB color gamut that’s found on the newer iPad.

There are two other perks iPad Air 5 buyers will get to experience. Of the two tablets, this is the only one that supports Stage Manager, which offers a new way to multitask. The more expensive tablet also includes a media engine, a fancy name for specialized cores within Apple Silicon (in this case, the M1). This engine is dedicated to processing digital media codecs, including hardware-accelerated H.264, HEVC, and video encoding/decoding.

The only other difference between the iPad Air 5 and the iPad (2022) are the color choices. The former comes in Space Gray, Starlight, pink, purple, and blue. The latter also comes in a pink and blue option, but the hues here are darker. The iPad (2022) is also available in silver and yellow.

You’ll need to decide whether it’s worth paying $150 extra for the extras the iPad Air 5 provides. If you’re OK with paying more just because you want a better iPad, the iPad Air 5 is your choice. However, if money is a significant concern, understand that the new iPad for 2022 is a terrific device and not that much different than the iPad Air 5.

The choice really comes down to whether you want better performance, multitasking, and graphics, which may or may not mean so much during everyday use. You’ll also need to decide whether an ever-so-slightly better display is high on your list of priorities and whether you’re okay with a first-generation Apple Pencil.

The bottom line: For most folks, I would recommend the iPad (2022). If you’re still not convinced, check out our list of the best iPads of the year.

The better tablet, but maybe not the one for you

Apple’s iPad Air 5 brings some Pro-level features down the lineup without upping the price, making it a solid buy for anyone after a mid-tier iPad.

When you want almost all the features of the iPad Air 5 but are looking for a smaller price, this is the tablet for you.

New iPad gets the Apple Pencil it deserves… thanks to Logitech