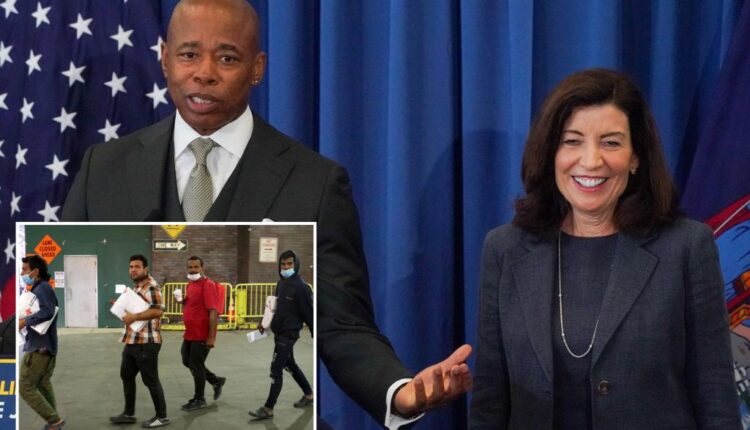 Mayor Eric Adams faces a crisis that could break his mayoralty, and Gov. Kathy Hochul just told him she won’t lift a finger to help.

Asked Thursday about Sen. Kirsten Gillibrand’s idea of letting Upstate take some of the illegal migrants overwhelming the city’s social services, the gov said, basically: Maybe after the election.

“When there becomes a legal path and work papers and a different dynamic, certainly there’ll be a lot of places that will want to embrace this community,” is how she put it. The least of these — getting migrants the papers to work legally — will take months.

(As for “legal path” and “different dynamic”: Republicans are about to take control of the House, and maybe the Senate too. The dynamic’s not headed in any progressive direction.)

Naturally, Hochul pretended it’s all about caring for the poor asylum seekers (as Democrats prefer to call them), intoning about “how many more times these people have to be shuffled around.”

No: It’s about what Queens Borough President Donovan Richards calls “a powder keg” and “a recipe for a social and economic disaster.” And that’s with just 20,000 or so migrants here so far, when they’re still coming into the country at over 2 million a year — with perhaps a fifth naming New York as where they’d rather be.

Hochul won’t help (certainly not with state money, let alone any relocations) because she figures it’d cost her more votes Upstate than she’d gain in the city — and because no one’s offering her fat campaign donations to do it anyway.

And, governor: Where does the city go for the option to not accept migrants before they can actually sustain themselves?

The gov’s hanging the mayor out to dry — and it’s not the first time. Maybe it’s time to think again about pulling your endorsement, sir?