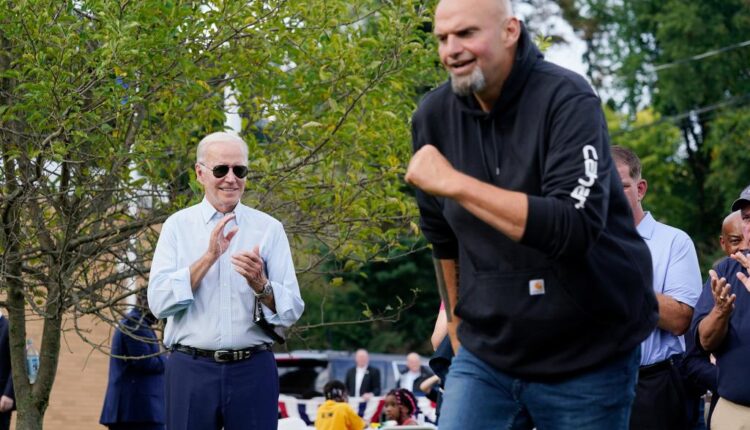 In a swanky back room at the Lackawanna Station Hotel in Scranton, Pa., President Biden sits across from Senate candidate John Fetterman. Biden poised just so in a dark suit, a friendly tight-lipped Irish smile on his lips, Fetterman in a dusty gray hoodie and shorts, trying not to scowl.

“It’s not about kicking balls in the authority you know.”

“Just like Strom Thurmond used to say. Where is Strom by the way? Strom?” Biden looks around frantically for the politician who died in 2003.

“Problem is this whole crime . . . uh, thing. Just because I said a few times that I want to release half of murderers from jail, this fancy Oz says I’m not (using air quotes) prioritizing public safety. That I’m not tough enough.”

“Are you kidding me? Not tough,” Biden chuckles. “Look at you, you’re massive. If you weren’t white I’d say you could still be playing football.”

“Thanks, Mr. President,” Fetterman mutters, “Oz says I’m soft on crime, but did he ever chase down a black guy with a shotgun just for being in the wrong neighborhood? I don’t think so. I’m practically Batman over here.”

“I know it, John, my dad used to say to me, when he wasn’t a miserable wreck agonizing about the mortgage, or paying for my college, or the health-care bills, he’d say, Joey, crime fighting starts with you, that why on weekends we’d head down to the Puerto Rican pool hall and crack some skulls, just as a warning.

“What did you use, chains, Mr. President?”

“No, John, that was just at the swimming pool when I dealt with Corn Pop. Dad liked to use a baseball bat with a long rusty nail poking through it, and I was pretty handy with Chinese throwing stars in those days. These were some bad hombres, Jack.”

“That’s how you get respect, John, after that every year they voted for me like I was a plate of nachos. That pool hall was my political home. We’d listen to Tito Puente all day. Where is Tito by the way, he’s suppose to be here for the rally. Tito?” he looks around for the musician who died in 2000.

“I see what you’re saying, Mr. President, I have to show these voters who the real tough guy is. You know, I once vandalized a storefront in my own city as mayor. You think Oz with his expensive loafers, shiny suits and New Jersey mansions and his performing cardiothoracic surgery woulda done that?”

A long thoughtful silence ensues, until Biden again chimes in.

“We should get some throwing stars, ooh and ice cream. I’ll ask.”

“I don’t know, whoever gives me these note cards that tell me when to sit down.”

Fetterman looks a bit nervous but takes a breath and dives in.

“Be honest, Mr. President. The hoodie and shorts, what do you think? Is it working? Am I kicking authority in the balls or do I just look like the guy searching the parking lot outside 7-Eleven for half-smoked cigarette butts?”

“I think you look great, John. A lot like some of Hunter’s buddies, actually. Great guys. Those guys would show up 2, 3 o’clock in the morning sometimes, just to hang out. I mean it, I really do, that’s friendship.”

An elegant young woman in a navy blue dress drifts in, handing Biden a note card and just as quietly is gone.

Biden looks back at the note card. “Oh, leaving, it’s time we be leaving. That makes more sense. I didn’t have to sneeze. Did you?”

Biden leans in and squints before whispering, “You’re tough, John, the toughest, not a joke! We are the best the Democrats have to offer to the country!”

With that Biden dawdles off in the wrong direction before being gently corrected. Fetterman heads home for a nap.