If Harry and Meghan attack royals again, Charles should exile them to irrelevance 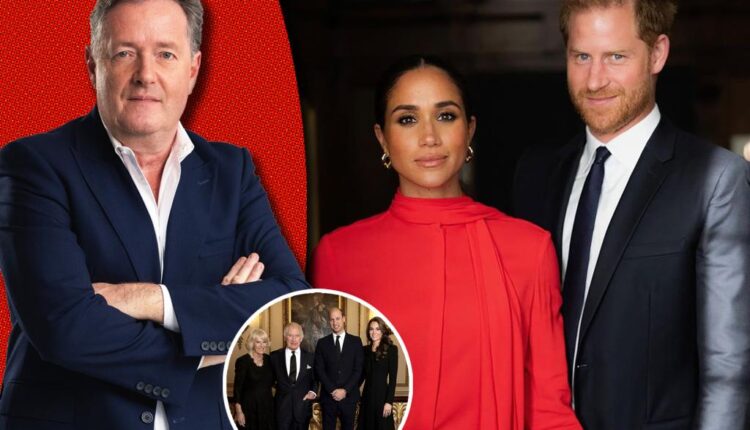 If there’s one thing more certain in modern life than death and taxes, it’s Meghan Markle and Prince Harry trying to steal the Royal Family’s thunder.

I’d have bet gargantuan amounts of dollars that within 48 hours of Buckingham Palace releasing a new official photograph of King Charles III and Queen Consort Camilla, and the new Prince and Princess of Wales, up would pop the renegade royal grifters with an ‘official’ photo of their own.

Sure enough, yesterday the Sussexes released two pictures from the One Young World summit in Manchester, England last month.

The one that made me laugh loudest (I find the absurd antics of these two deluded clowns increasingly hilarious) was a black-and-white image of them taken from side-on, in which Harry looks as miserable and zombified as usual since he sought freedom and happiness by ditching his country and family.

Meghan looks like the cat that’s got the cream as she gazes beatifically at her people who’d paid thousands to hear the whiny multi-millionaire actress preach about equality and positivity.

It was taken by celebrity photographer Misan Harriman, and the message was clear: ‘Anything the stuffy old royals do, we do the same, only better.’

There’s just one problem: they don’t.

The photo of Charles and William and their wives is a symbol of understated royal power.

This is the current and future monarch of the United Kingdom and Commonwealth.

As such, they are the biggest stars in the world, dwarfing the celebrity-wattage of any mere entertainment or sporting rivals.

Meghan and Harry, by contrast, are now just a pair of B-list wannabes pretending to have royal power so they can make money from it.

To date, they’ve fuelled their royal status by constantly trashing the Royal Family and Monarchy to anyone who will pay them a big check.

But that shtick’s wearing very thin.

How many more times can they wail in public about how awful their families are before we all just stop listening?

And more to the point, how many more times is King Charles going to let them?

It’s no secret that Charles wants to slim down the main Royal Family down to a top tier of him, Camilla, William and Kate and their children, followed by a second tier of his youngest brother Prince Edward and wife Sophie, Countess of Wessex, and his sister Princess Anne.

They would represent the Monarchy by conducting formal royal duties.

Everyone else on the royal cab rank, including disgraced Prince Andrew and the permanently moaning Sussexes, would effectively be removed from the official Firm, and shuffled into unused obscurity.

I have no doubt Charles will do this, and I also have no doubt that his patience with Harry and Meghan is running perilously thin.

He knows how damaging it is to the royal brand to have these two running an unofficial rival royal household that performs no duties but fleeces the titles for huge personal commercial gain whilst constantly attacking the family and institution.

And there are two things coming up fast that could be the tipping point for the King to cast them asunder.

The first is Harry’s much-hyped tell-all book, which will doubtless contain endless new sniping about how badly he and his wife have been treated at the hands of what they want us to believe, without providing any actual evidence, are the ghastly callous racist royals.

The second is their upcoming Netflix documentary series, supposedly about their wonderfully inspiring love story (pass the vomit bucket..) which will doubtless do the same.

Because let’s be frank: if they’re not spilling secrets about their family, who cares what they have to say about anything?

Publishers and streaming firms aren’t throwing cash at them to deliver their dreary hypocritical woke homilies.

They’re doing it to dish the royal dirt, as Meghan and Harry have gleefully done ever since they decamped to California.

But the new King won’t tolerate it.

And for what he might do, look no further than what’s just happened in Scandinavia where Queen Margrethe of Denmark just removed a load of royal titles from her grandchildren, saying: “It is my duty and my wish as Queen to ensure that the monarchy continues to shape itself in keeping with the times.

“It sometimes requires difficult decisions to be made, and it will always be difficult to find the right moment. Carrying a royal title entails a number of obligations and duties, which will in future be the responsibility of fewer members of the royal family.”

I would imagine Meghan and Harry’s smug little jaws dropped into their kale lattes when they heard this news.

Their whole royal status depends on their titles.

It’s literally the currency of their fame and fortune.

Yet they have no obligations or duties to earn them.

So, if I were King Charles, and notwithstanding the fact he still loves his errant son, I’d make it very clear to them that one more word of public criticism about the Royal Family or Monarchy that spews out of their spoiled, entitled, attention-seeking mouths, and they’ll be stripped of all remaining titles and dumped into the trash can of former royal irrelevance.

And trust me, there ain’t no greenbacks in that.