How trans activists got me deplatformed by PayPal and Etsy 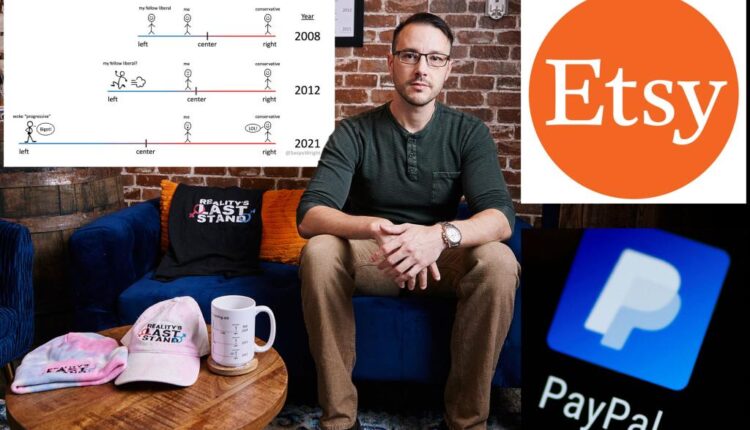 As an evolutionary biologist and writer, I have calmly argued the (apparently controversial) position for years that biological sex is real, there are only two sexes, and the differences between males and females sometimes matter.

I do this for a living on Substack, where I run the successful online magazine “Reality’s Last Stand.” This line of work gives me enormous freedom, but it also makes me exceptionally vulnerable to the political whims of the payment processors, like Stripe and PayPal, which I rely on to transact with my supporters.

Now activists, who insist that biological sex is nothing more than a transphobic mirage, are trying to silence me by going after the very payment processors I rely on.

Last April, I received an out-of-the-blue email from PayPal, which I used to receive donations from my supporters, saying, “You can no longer do business with PayPal.” It went on to say that, “After a review, we decided to permanently limit your account as there was a change to your business model or your business was considered risky.” It added that my funds were being withheld for up to 180 days.

Thinking this must have been a simple error, I called PayPal and was told I’d receive an email with more information about how to resolve my suspension. Instead, what I received was a message informing me that if I wanted “to request information about a customer’s PayPal account” — apparently including my own account — I would need to “submit a legal subpoena.”

Not long after my PayPal ban, I received a notification from online retail store Etsy, where I sold various merchandise such as hats, mugs, posters and stickers bearing my website’s logo and a political cartoon I created that became famous when Elon Musk tweeted it to his 90 million (at the time) followers. Etsy said my account had been permanently suspended for violating their policy against selling merchandise that “promotes, supports, or glorifies hatred or violence towards protected groups.”

I am far from the only person who has been targeted in such a way. In January of this year, journalist Ian Miles Cheong wrote that PayPal permanently banned him for his political views without notice. And last month, PayPal issued a flurry of lifetime bans that included the UK-based Free Speech Union and the Daily Sceptic, both run by conservative editor Toby Young, as well as the newly-founded gay rights organization Gays Against Groomers, which has been the target of an absurd Left-wing campaign to smear the group as “transphobic.”

My merchandise did no such thing. My appeal was subsequently denied.

In response to PayPal’s censoriousness, many (including myself) have flocked over to Donorbox, a donation platform that utilizes the Stripe payment processor. However, the left-wing partisan outlet Media Matters recently published a hit piece calling out Donorbox for being “a funding haven for anti-LGBTQ extremists” who have been cut off by PayPal and other platforms. The article mentioned Gays Against Groomers and other writers like myself as prominent examples of extremists, in a naked attempt to pressure Donorbox to drop us and silence any critics of gender ideology.

When we move elsewhere, the online trolls will no doubt come after those companies, too, by slapping the “hatred” label on what most of us call “reality.”

Given that so many people are now buying merchandise and paying for journalism online, inserting politics into payment processors is a good way to make an already polarized society split at its seams. Unless these companies can purge ideological bias from their operations, government oversight may become necessary.

And when those companies look back at how their commercial freedoms got curtailed, they’ll only have themselves to blame.

This ends with the first company that grows a spine.

Dr. Colin Wright is an evolutionary biologist, who has written for the Wall Street Journal and Quillette. Follow him on Twitter: @SwipeWright