How Republicans can make the best of their microscopic House majority 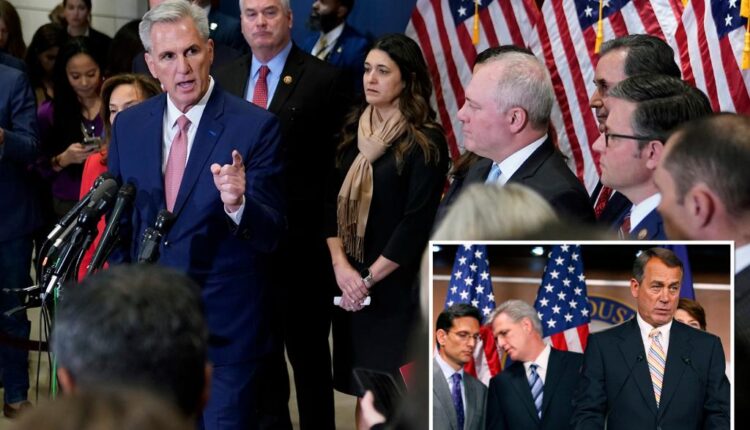 Kevin McCarthy may now have the hardest job in Washington.

Assuming he becomes speaker of the House, which will require the near-unanimous support of his caucus and isn’t necessarily a forgone conclusion, he’s signing up for the most miserable experience of any congressional leader since John Boehner barely controlled a Republican House majority in the Obama years.

Boehner presided over a caucus infused with new Tea Party members who expected to do great things when the leverage a congressional majority has over a president of the opposite party is inherently limited.

The mismatch between their hopes and their power led to continual frustration, which was taken out on Boehner. By the time he resigned, the Ohio Republican could be forgiven for wondering if his dog was going to turn against him.

Now, House Republicans will have a microscopic majority in a Washington still arrayed against them. It will be hard enough to pass anything consequential or controversial out of the House before it runs into a brick wall in the Democratic-controlled Senate. House Republicans presumably won’t be able to get their handiwork within hailing distance of President Joe Biden’s veto pen.

In light of this, the first priority for House Republicans should be tempering expectations. Their most important achievement has already occurred — namely ensuring that Nancy Pelosi will no longer be the speaker with all that that entails for Biden’s agenda.

Making the most of their opportunity otherwise will require some realism, subtlety, and creativity.

Deadline-driven fights loom over the debt limit and budget next year. Republicans will want to extract their pound of flesh, but shouldn’t overestimate their influence. They aren’t going to reform entitlements or put the United States on a fundamentally different fiscal path in a dramatic, down-to-the-wire confrontation over the debt limit or a possible government shutdown. Usually, the aggressors in such fights lose, and it’ll be hard to maintain GOP unity, with more cautious Republican senators hesitant to go down this path.

Republicans would be well-served to choose a few plausible policy objectives at the outset of these fights — say, revoking the new Biden IRS agents — rather than coming up with large, superficially attractive demands that inevitably have to be abandoned.

Then, there are the investigations. Here, Republicans don’t have to worry about the balancing act involved in getting to 218 votes. The House Oversight Committee can simply get busy. There are still pitfalls to avoid, though.

The Hunter Biden investigation obviously needs to focus on public corruption and the question of Joe’s involvement more than Hunter’s lurid personal life. Republicans should steer clear of any counter-programming on Jan. 6, especially given what the midterms showed about the political costs of any association with Stop the Steal. And impeaching Biden without even a majority in the Senate would be an exercise in futility.

Otherwise, the field is wide open for probes that could be substantively important and politically useful, whether on the origins of COVID, how the CDC and other government entities responded to the pandemic, the Afghan withdrawal, and government pressure on social-media companies.

Finally, House Republicans should pass legislation, not in the hopes of getting any of it signed, but to show that the party has a solution-oriented agenda. This was an element of the party’s message that was woefully lacking in the run-up to the midterms.

They should pass bills to address inflation, support families, control the border, move toward a more merit-based legal immigration system, push back against the woke education bureaucracy, reduce college costs and point in a more sensible direction on crime.

The party should demonstrate that it’s pro-family and pro-law-and-order while trying to sell itself to the middle again as serious and competent.

This will be no small task with a very narrow, fractious majority, but no one said Kevin McCarthy’s job would be easy.

Genesis Sought $1B Bailout From Investors Before Halting Withdrawals

Pokémon Scarlet and Violet: Tips and tricks for beginners