How Putin might use a nuke — and how we should respond 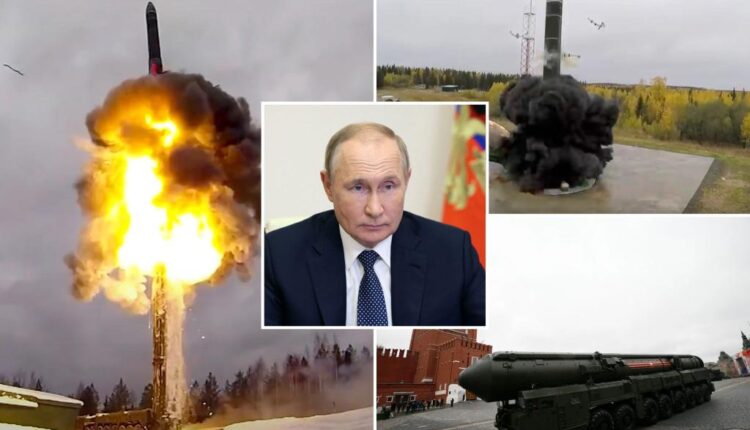 Six months into Russia’s invasion of Ukraine the unthinkable has happened: Russia is losing. Vladimir Putin is determined, nevertheless, and increasingly desperate. He has undertaken a partial mobilization, formally annexed four regions of Ukraine and renewed his threat of using nuclear weapons — “I’m not kidding.” Is the threat real? And if so, how should the United States respond?

Russia has a substantial nuclear arsenal, including strategic missiles and bombers and a new autonomous torpedo designed to explode in harbors to create a massive tsunami. These warheads’ explosive powers range in the hundreds of thousands to several million tons of TNT equivalent.

Russia also has more than 2,000 tactical nuclear warheads that could be fired from artillery and mortars as well as mated to dual-purpose intermediate range missiles like the Iskander and Kinshal or dropped by aircraft. These tactical warheads are expected to be in the range of tens to a few thousand kilotons of power — less than what the United States dropped on Japan in 1945.

With his forces falling back in disarray, Putin has backed himself into a corner by annexing the four regions of Ukraine (plus previously annexed Crimea) and then ruling out any negotiated withdrawal. The unruly mobilization of some 200,000 partially or untrained men, lacking proper equipment, is unlikely to turn the tide on the battlefield in the immediate future. Hence the rising risk that Putin will employ nuclear weapons.

In Russian exercises in recent years, the Russian doctrine of “escalate to de-escalate” has been employed; one or more nuclear weapons is fired against, say, a Polish city, after which NATO terminates its operations rather than respond.

But NATO is not a party to the current conflict, though NATO members are helping arm, equip and advise Ukraine. If Russia were to use nuclear weapons against Poland or some other NATO member, NATO would have little choice but to respond in kind. While NATO lacks the numbers and sophistication of Russian tactical nuclear warheads, NATO does have available some 100 aircraft-delivered nuclear bombs, as well as US, UK and French nuclear missiles that could strike Russia.

While some in the West have expressed fears of WWIII, Putin seems unlikely to take such a profound escalation at this point, especially with China and India on the sidelines distancing themselves from his conflict and undoubtedly opposed to such a step.

This leaves open the option of using tactical nuclear weapons against cities, key facilities or choke points or actual forces in Ukraine. US exercise experience during the Cold War suggests that even “pulses” of multiple tactical nuclear warheads — with power in the range of 10 kilotons — are difficult to use effectively against maneuvering battlefield forces. Locating targets, mating weapons to guns and launchers and tracking the targeted forces are difficult — so the weapons often missed. What resulted was a radioactive battlefield often rendered impassable by craters and debris, and substantial risk to our own forces.

Even with modern drones and GPS, and assuming Russia has modernized its warhead to achieve “neutron bomb” effects, achieving significant battlefield impact with a few cannon-fired weapons will be problematic. On the other hand, stationary targets like rail and road junctions, villages or urban areas are certainly capable of being hit and destroyed — but often without any immediate tactical benefit and likely with global condemnation.

So Putin’s threats must be seen as primarily psychological, designed to heighten the fears of WWIII, sap Western resolve, reduce military assistance to Ukraine and encourage the voices calling for an immediate halt to military action by Ukraine.

Indeed, in January, prior to the conflict, Russia encouraged the five major nuclear powers to agree that “there can be no winner in a nuclear war.” Putin echoed this sentiment as late as Aug. 1. (This was a continuation of a decades-long effort by the Soviet Union and Russia to force the West to abandon nuclear-weapons development and cede nuclear superiority to the Soviet Union and clearly designed to feed the West’s anti-nuclear sentiments.)

To accede to Putin’s threats would be to abandon our principled stands against aggression and in support of the rules-based international systems and all the means that have helped check aggression in the post-WWII era. Chaos could ensue with every nuclear-armed power free to attack rivals.

So America and our allies must not only stand firm against Putin’s nuclear sabre-rattling — which we are doing — but also prepare a strong response should Russia use nuclear weapons.

Ideally, this response would include international condemnations, war-crimes charges directly against Putin, more sanctions and, crucially, active US or NATO military intervention directly against Russian forces in Ukraine. The United States should be building up its expeditionary air forces capabilities in Romania and Poland to have the capacity to strike and seriously degrade Russian forces, their logistics and command and control in, say, Kherson or Zaporizhia or Crimea and the Black Sea Fleet sufficient to deny Russia the capability to hold the annexed territories.

But in the face of Putin’s threats it is also time for the United States to call publicly for Putin to withdraw from all Ukraine and offer to broker the talks designed to secure this promptly and peacefully. Russia must account for the dead, abducted and missing, pay reparations and cooperate in war-crimes investigations. Ukraine’s future security can then be arranged, and economic recovery begun. This is the right way forward.

You can swipe your way around the Dynamic Island