How long will Democratic voters continue to allow themselves to be treated like fools? 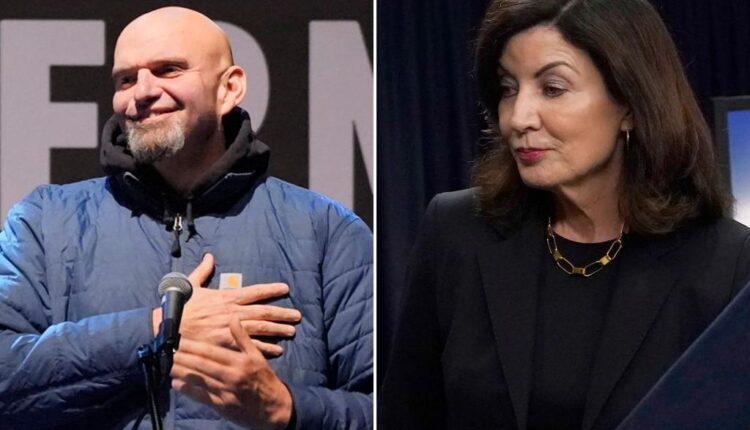 “Biden-Fetterman 2024” was the assessment of one wag on Twitter after the car-crash debate performance of John Fetterman, the Democrats’ stroke-damaged Senate candidate in Pennsylvania.

“In 2022, a debate performance like [Fetterman’s] can accurately be called ‘presidential,’ ” quipped another.

Why do Democrats insist on putting cognitively impaired people on the ticket? It’s cruel.

From a 79-year-old president who gets lost and goes wandering every time he gives a speech, to Fetterman, another special-needs candidate who could not utter a coherent sentence on stage against the GOP’s Dr. Mehmet Oz Tuesday evening, the ­sociopathic ruthlessness of the Democratic machine is on full display.

It’s cruel to dwell on Fetterman’s performance. However repellent his policies, the poor man had a debilitating stroke five months ago.

Suffice to say that, while the gaslighting Philadelphia Inquirer declared Fetterman the winner with flying colors, that says more about the newspaper’s contempt for its readers than it does about the reality.

A Twitter poll after the debate had Oz the winner by 82% of respondents. The betting markets similarly moved sharply against Fetterman.

The real question is: How long are Democratic voters going to continue to allow themselves to be treated like fools?

It was one thing to hide President Biden in a basement under cover of the pandemic, but Democrats want to turn that ruse into a playbook.

Fetterman should be at home ­recuperating during these crucial months instead of humiliating himself and jeopardizing his recovery. Does no one love him enough to protect him?

The relationship between a party and its followers is like a romance. If your partner is abusive, it’s time for a break. It is abusive to foist candidates like Fetterman and Biden on your voters. Why do Democratic voters allow them­selves to be abused? Fool me once, shame on you. Fool me twice, shame on me.

But there’s no shame in the Democratic Party.

Fetterman’s campaign tried simultaneously to tell us it was “thrilled” with his catastrophic performance, but at the same time said he had been betrayed by the closed-captioning system he need­ed to comprehend in some fashion the questions.

The company that provided the closed captioning denied it was at fault, but creative minds already had dreamed up new culprits: Dr. Oz was to blame for even running against a sick man. How “ableist” of him.

Fetterman’s hasn’t been the only woeful debate performance by a Democratic candidate. The stench of defeat hangs over Biden’s and Nancy ­Pelosi’s party less than two weeks from the midterms.

From Oz to New York’s Lee Zeldin, Ohio’s J.D. Vance to Arizona’s Blake Masters and Washington state’s Joe Kent, GOP candidates are wiping the floor with their opponents in debate after debate. In the case of Arizona gubernatorial candidate Kari Lake, her Democratic opponent is so outclassed, the Dem is too scared even to get on the debate stage.

Kat on the run

Zeldin bested Gov. Hochul so conclusively, it was no wonder she ran away from the media the next day. He targeted soaring crime and “DAs that let violent criminals out on the street to roam free . . . This governor still has not talked about locking people up committing any crimes.”

Hochul’s response: “I don’t know why that’s so important to you.”

Someone should have reported a murder on the debate stage.

The Dems’ internal polls must be even worse than the published ones, judging by the panic, lies and policy U-turns at the 11th hour. Their worst nightmare has materialized in the latest New York Times-Siena College poll showing that, for all the Democrats’ fake hysteria about abortion, the gender gap the party relies on has closed.

Just as many women now plan to vote for a Republican as for a Democrat, and female independents ­favor Republicans by a stunning 18 points.

It won’t have helped that the president just invited to a meeting at the White House a self-declared “bimbo” transgender person who specializes in making a mockery of womanhood.

Biden told his simpering visitor that it is “immoral” for states to oppose “gender affirmation” treatment (a k a chemical castration, and irreversible surgery) for “trans kids.”
That is quite the last-minute campaign pitch.

All the Democrats have left is hating on MAGA. You can see the Democratic establishment setting the stage already for their post-election excuses: voter suppression (despite record turnouts), racism, of course, and fascism — “ultra-extreme” “mega-MAGA” and “semi-fascists,” as our unifying president likes to call Republicans these days.

For Democrats, losing an election is “losing a democracy” and descending into Nazism.
Hillary Clinton issued an ominous video this week warning that “right-wing extremists already have a plan to literally steal the next presidential election.”

With a straight face, Jean-Pierre said: “High turnout and voter suppression can take place at the same time.”

Democrats in various states are staging “too-extreme-GOP” press tours “to call out Republicans’ unpopular ultra-MAGA agenda,” and Dems’ proxies in the media are whipping up Nazi analogies.

MSNBC’s regular race baiter Jason Johnson told Joy Reid, “Fascism and Nazi are . . . the correct ways to describe what is happening with Republicans.”

In his short speech to the Democratic National Committee in Washington, DC, this week, Biden railed against “MAGA” no fewer than seven times — five times it was “mega MAGA.”

MAGA means “Make America Great Again, so it’s a curious thing to campaign against. But there’s a strange honesty to the pitch, since Biden’s entire presidency has been about “Making America Suffer Again.”

What is an anti-roll bar link?