How Lee Zeldin learned he can defy the odds 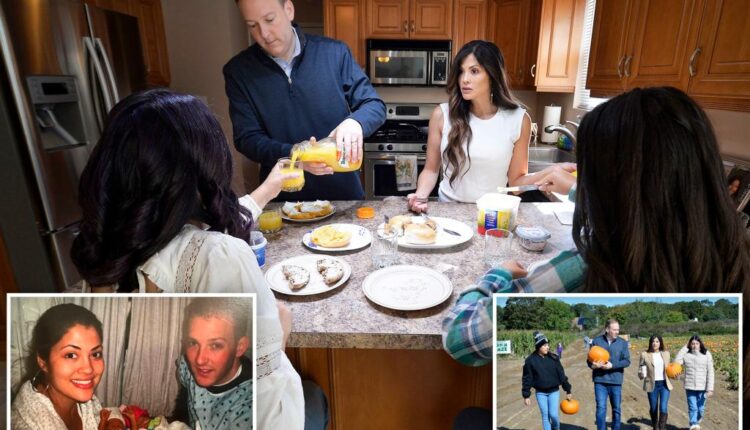 He is the man to save New York but Lee Zeldin comes across more like Clark Kent than Superman as he butters muffins with wife Diana and their twin teenage daughters at the kitchen bench of their modest Long Island home.

The Post spent a sunny Saturday with the Zeldin family in Shirley, the working-class town where the aspiring governor and former congressman grew up, to find out if he has what it takes to rescue the state from its downhill spiral.

Amiable, down to earth, unflappable and slightly reserved, Zeldin is the sort of man who has been underestimated all his life — and he likes it that way. He has a Gary Cooper-esque humility and inner toughness that used to personify the small town American male, starting small and dreaming big.

In grade school, while shuttling back and forth between his divorced parents’ homes, the native Long Islander earned his black belt in Taekwondo and won a world championship. Straight out of William Floyd High School in Mastic Beach he joined the ROTC, a boyhood dream which paid for college. At 23, he was sworn in as the state’s youngest attorney, after graduating from Albany Law School.

As an Army paratrooper he was deployed to Iraq with the elite 82nd Airborne Division, in the war’s deadly summer of 2006, serving in military intelligence and the legal corps, parachuting out of planes and helicopters, helping capture terrorists, and commandeering civilian vehicles at the point of an M4 carbine.

After four years of active duty, he and Diana opened a successful law practice back home in Smithtown, a town bristling with law enforcement families that boasts it is the reddest patch of Long Island.

At 30, he was elected to the State Senate, and re-elected. At 34, he was elected congressman for New York District 1 and served four terms. He would have been a shoo-in as chairman of a prestigious committee when Republicans take back the House. Instead, at 42, he has taken on what looked to be an impossible challenge, running for governor of New York — and coming within two points of Kathy Hochul in a poll last week.

Along the way he cheated death in Iraq and then again two years ago when he won a battle against cancer.

He is a man whose time has come, and come again, and the times could not suit him any better now with New York on its knees, and soaring rates of crime and disorder leave no neighborhood unscathed.

The menace came to his doorstep in Shirley on Sunday afternoon, just a day after the Post had been interviewing him on his front porch.

Mikayla and Arianna, 16, were home alone doing their homework at the kitchen table when gunshots erupted on their quiet, nondescript street and two wounded teenagers fell or crawled under their porch. Police found a spent bullet against the fence, just 30 feet from where the terrified girls were studying. They suspect the drive-by shooting was gang-related.

Later that night, as the media amassed outside their house, Zeldin was accused of politicizing the incident. He allowed a rare slip of his calm demeanor.

“At what point are we supposed to talk about the crime on our own streets?” he said, his voice rising. “I’m standing in front of crime scene tape in front of my own house.”

There are frightening moments in every family that bring them closer together, but the Zeldin family has had more than their fair share, beginning before their daughters were even born.

Lee was in Iraq in September 2006 when Diana went into premature labor back home. The twins were 18 weeks early, and an urgent Red Cross message had Lee’s commanding officer order him home for what was expected to be a funeral.

But once he got to Diana’s bedside at Georgetown University Hospital, her contractions stopped, a miracle she attributes to his arrival.

“The only time he left me was when his parents came, and he’d go out to dinner or lunch for no more than two hours and then he’d be right back.”

The babies were born weighing a pound and a half, tiny red cherubs who needed heavy intervention to survive.

“They went through a lot of surgeries,” says Lee. “I saw the girls go through more in three and a half months than I have been through in life and most people experience in their entire lifetime . . .

“It became very frightening for Mikayla [who] went into septic shock, which has in the 80 to 90% mortality rate. And while she was in septic shock, she had a stroke.

“The doctors set Diane and I down to talk us through it … suggesting that we let Mikayla go. Now, here’s the thing. Mikayla, for the last 24 hours, [she] wasn’t getting any better, but she wasn’t getting any worse. She was fighting.

“One of the options was to do this very risky brain surgery. Diane and I went up to Mikayla’s incubator and we said goodbye. Certainly, fearing the worst.

“We say goodbye. We go back to the waiting room. Doctors come out after surgery, and they say good news. She’s not out of the woods, but things went better than expected.
“I remember Diane and I high-fiving each other. We were so excited, but it was a long road.”

Three months later, the girls came home, with a dozen medications each and heart monitors that jangled the nerves of their worried parents in the middle of the night.

One weary day at the Fort Bragg commissary Lee and Diana ran into a woman with three sets of triplets whose six surviving children all had special needs. “Her shopping cart was full; her husband was on another deployment to Iraq and she was smiling at us and telling us all the ways we could take advantage of the resources at Fort Bragg to be great parents. It really hit home for us that no matter how bad you think you have it, look what she was going through.

“That conversation in the commissary was the turning point for us.”

The girls today are in 11th grade, in advanced classes and getting good grades, with no sign of their difficult start.

“Because of the power of prayer, the miracles of modern medicine and their will to live, they just turned 16,” says Lee proudly.

His pro-life values were strengthened by seeing “life in the second trimester, and it was beautiful. Thank God these girls had the opportunity to be born, to survive, to thrive … That absolutely was a point where my faith deepened very much.”

But abortion is not on his agenda, and he accuses Gov. Hochul of a “dishonest and disingenuous” scare campaign against him on the issue, because the recent Supreme Court decision has no bearing on New York which, years ago, codified one of the most liberal abortion laws in the country, to the end of the ninth month.

“There’s a less than 0% chance that the Assembly Democrats … are sending me a bill to roll that law back. It’s not why I got in this race. It’s not something that I will do when I’m serving as governor. I am pro-life, but that law is not changing.”

Lee, 42, is Jewish, Diana, 46, is Mormon, so the family celebrate both Christmas and Hannukah. The girls attend Lee’s old school at Mastic Beach, as well as Hebrew school at the B’nai Israel Reform Temple where they had their bat mitzvahs.

Diana, a petite brunette dynamo, works in a local law firm as a patent specialist and is close to her teenagers, ferrying them to tennis and saxophone when Lee is away.

The couple met by chance in Washington, DC, where he was out on the town in full dress uniform after a buddy’s wedding, and she was having a drink with colleagues. He was smitten when he spotted “this beautiful woman who caught my attention” across the bar of the Ritz-Carlton and made an excuse to come back to DC, for their first date at Smith & Wollensky. She impressed his family the first time she met them, by being the only person at the restaurant who wasn’t thrown off the resident mechanical bull. “Marry that girl,” said Lee’s uncle.

Diana has shown the same tenacity in the ups and downs of their marriage as she did on the bucking bull. A successful political career is always a team effort and Zeldin’s family is prepared for the challenge.