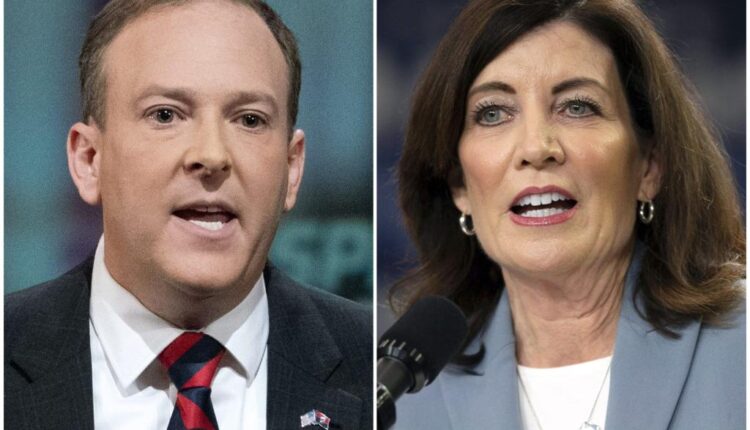 Democrats this election cycle from New York to California insist that democracy is at stake and truth-telling is of paramount importance. Well, they didn’t act like it last week when Democratic officials, political operatives and journalists spread a misleading smear of Rep. Lee Zeldin across social media.

As the neck-and-neck race for New York governor comes down to the wire, Team Hochul got an unexpected assist — from local TV reporter Morgan McKay at Fox 5.

McKay posted a tweet promoting her interview with GOP gubernatorial candidate Lee Zeldin. She wrote, “We asked Zeldin if he would condemn white supremacy, but he instead pushed back on claims that Long Island Loud Majority has ties to the far right.”

Problem is, she never asked Zeldin to condemn white supremacy or anything.

Her shock is wholly manufactured. The online story she linked read: “We asked Zeldin about the Long Island Loud Majority and if he condemns right-wing extremism.” Contrast that actual reporting with her more provocative and certainly misleading tweet.

On the subject of support from right-wing groups, she cited the time Zeldin came under fire for meeting with Long Island members of the Oath Keepers in summer 2015.

Yet her report shows McKay only asked him about Long Island Loud Majority — not about “white supremacists” or the Oath Keepers, Proud Boys etc. And even the Southern Poverty Law Center only labels the Long Island group “antigovernment,” citing its opposition to mask and vaccine mandates.

I reached out to McKay to understand the thinking behind her tweet. She didn’t respond via tweet or direct message.

The smear — based on a false premise — went viral in the hands of Democrats just so it could be used against Zeldin, who has been fast gaining ground on Gov. Kathy Hochul.

Truth didn’t matter when it came to taking partisan advantage.

The false narrative was retweeted and amplified by Hochul (“This is who Lee Zeldin is — someone who refuses to condemn white supremacy”), her deputy press secretary Avi Small, Assembly members Yuh-Line Niou and Andrew Hevesi and Democratic strategist Chung Seto to their thousands of followers.

Rep. Bowman, a Bronx Democrat and “Squad” member, jumped on his Republican colleague in a tweet snarking, “No surprise that Lee Zeldin wants to make nice with white supremacists.”

Manhattan Councilman Keith Powers quote-tweeted McKay using the same out-of-context Zeldin reply she deceptively quoted: “I would just say it’s important to meet some of these people” — attributing it to “@leezeldin on white supremacy.”

Once again, progressive Democrats proved themselves susceptible to a herd mentality and narrative confirming their bias. They were shameless in their zeal to cast Lee Zeldin as a racist villain.

Long Island Assemblyman Jarett Gandolfo and Post columnist Karol Markowicz were among those who pushed back against the false narrative.

“The attempt by Kathy Hochul and her team to push this false narrative is a sign of desperation — Zeldin has the momentum on his side, so they resorted to dishonest and divisive smear tactics,” Gandolfo told me.

Confirmation bias is real, and too many New York Democrats demonstrated they are colored by it. They undercut their own repeated arguments that freely circulated untruths are threats to democracy by ignoring their own complicity in circulating some.

Democrats need to do better.

Journalists and others in the media industry need to demand and do better.

A little self-policing by politicians and journalists will go a long way to healing the schisms dividing the nation.

Former Assemblyman Michael Benjamin is a member of The Post’s editorial board.