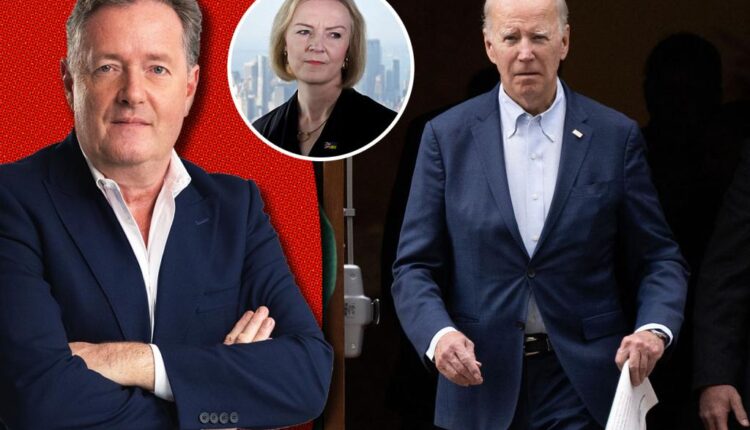 “The economy is strong as hell!” exclaimed a smug President Biden jubilantly on Saturday as he guzzled a large chocolate chip ice cream.

The eye-boggling irony of this absurdly disingenuous statement wouldn’t have been lost on America’s ice cream vendors who are suffering a terrible year as the price of making it has soared by 13%, driven largely by higher milk costs caused by higher dairy farming costs.

And what’s behind those higher dairy farming costs?

You can keep telling the American people the economy is “as strong as hell” but if tens, if not hundreds, of millions of them are experiencing hell because of the economy, then they’re going to call bulls–t.

And that’s exactly what they ARE doing.

A damning new CBS/YouGov poll reveals that 65% of Americans believe the economy is getting worse, with just 15% saying it’s getting better.

Nearly two-thirds of registered voters think the Biden administration should be doing more to combat inflation.

And as for who’s to blame for this, 91% say it’s President Biden in varying degrees, with 45% saying his personal culpability is “a lot.”

Little wonder that in another poll, for Fox News, just 33% of registered voters said they would re-elect Biden, a lower figure than Trump or Obama ever had, and 62% think he’s a weak leader, with a majority also disapproving of his honesty, trustworthy, mental soundness to serve and ability to care for ordinary Americans.

In light of these shocking numbers, Biden’s arrogant boasting was not just inappropriate, it was downright offensive.

“I’m not concerned about the strength of the dollar,” he declared in his impromptu unearned victory lap at a Baskin Robbins in Portland, “I’m concerned about the rest of the world. Our economy is strong as hell. Inflation is worldwide. It’s worse off than it is in the United States. So, the problem is the lack of economic growth and sound policy in other countries, not so much ours. It’s worldwide inflation. It’s consequential.”

Then he breached “Special Relationship” protocol to pick out new British Prime Minister Liz Truss for a personal attack when he was asked about her disastrous recent mini-budget which tanked the pound, led to humiliating U-turns on some of her biggest tax-cutting politics, and forced her to fire her newly appointed Chancellor of the Exchequer, Kwasi Kwarteng.

“It was predictable,” sneered Biden. “I wasn’t the only one who thought it was a mistake … the idea of cutting taxes for the super-wealthy … I disagree with that policy.”

At which point, he paused as if suddenly realizing that gleefully dancing on the political grave of the leader of America’s No. 1 ally wasn’t a good look, and hastily added: “… but it’s up to Britain to make that judgment, not me.”

Too late for that, Mr. President — you’d already told the world what you think, and chucked Truss under the presidential bus.

And aside from his disloyalty — only last month, he told Truss at a press conference at the United Nations, “I look forward to working closely with you, you’re our closest ally in the world, and there’s a lot we can continue to do together” – Biden’s got a flaming brass neck thinking he has the right to lecture any other world leader about their economic policies given the way he’s handled the US finances since taking office, even if what he said about Truss was broadly true.

It’s like Kim Kardashian scorning people for being talentless, attention-seeking wastrels; they might be, but she’s the last person on earth who should be attacking them for it.

The truth is that from being “as strong as hell,” the US economy is in a very precarious place and could easily tip into recession.

The stock market’s crashing, the housing market is teetering on the brink of a sharp correction, interest rates are rocketing, household wealth has been decimated, and the worst cost-of-living crisis in living memory continues to cause very real pain and hardship for so many American families struggling to pay their bills or feed their families.

Yes, the aftershocks from the COVID pandemic have contributed to this, as has the ongoing war in Ukraine.

But President Biden repeatedly vowed to “rescue” and “recover” America, and so far, he’s done the opposite.

Just as his promise to “unite” the country has led to even more division and partisan acrimony, mainly because he keeps insulting those who voted against him.

So, for him to now embark on some inexplicable self-congratulatory tour about the ‘strong-as-hell’ US economy, and publicly trash-talk his closest allies for not being as economically smart as him, is a preposterous mischaracterization of the reality.

As The Post revealed in a devastating investigation into 401(k) retirement accounts, the average American has lost $34,000 in the past year, or 25% of their savings.

That’s the cold, hard, brutal truth about the impact of Bidenflation.

So, put your halo away, Mr. President.

As author Zack W. Van put it: “For every person who rides with a moral high horse, they also have a dead horse that they haven’t fed lying somewhere out of sight.”