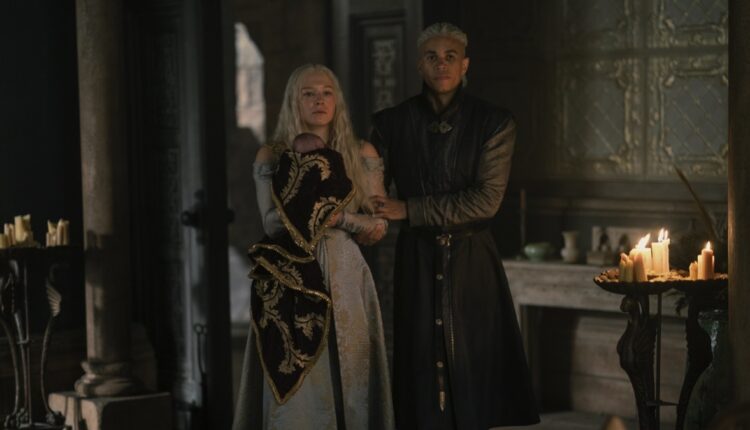 If you were up for some very graphic births and deaths, this episode of House of the Dragon was for you!

As a consumer of too much television, I share my thoughts on a few of my favorite TV shows. Here are a few of my miusings [sic] regarding the “The Princess and the Queen” episode from TV House of the Dragon:

Graphic birth scenes were a “thing” this episode, with sound effects and all. The episode opened with an adult Princess Rhaenyra giving birth to her third child. While she is married to Laenor Velaryon we learn that the father of all three of her children is not Laenor.

As a result of the time jump, Queen Alicent (now played by Olivia Cooke, who looks like a young Kate Winslet) is now an adult as well, with three children of her own. Her husband, King Viserys Targaryen, is still holding on but not looking well. It is going to be a shit show once he passes away.

Alicent’s character is the most changed in personality after the time jump. She loathes Princess Rhaenyra and her children, especially since they are “bastards.” Ser Criston Cole (now the Queen’s protector), who has not aged a bit since the time jump, but his hatred for his former lover Rhaenyra runs so deep that he even takes his hatred for her out on her children. Not a fan of pissed off Ser Criston Cole.

We got to witness the Queen’s son Aegon Targaryen jerking off while standing in an open window. I guess a breeze got him in the mood? Sadly for Aegon, he did not get to finish, as he was interrupted by his mother, who wanted to instill in him how important it was for him to become King.

Daemon Targaryen is now married to Laena Velaryon with possibly two daughters, and she is pregnant with a third child. Her pregnancy set the stage for another graphic birth scene in which the baby ended up being stillborn. Distraught and knowing that she would probably not survive this, she ran outside the Pentoshi manse, laid before her dragon, and commanded House of the Dragon‘s Vhagar to burn her alive.

We learned that the father of the Princess’s children is Harwin Strong. After a fight with Ser Criston Cole during a training session with the Princess and Queen’s children, Harwin was banished from the kingdom after he basically let the cat out of the bag that he was Princess Rhaenyra’s baby daddy and not Laenor Velaryon. By the end of the episode, Harwin and his dad are both dead (killed in a fire, set by assassins (whose tongues were cut off) sent by Harwin’s own treacherous brother, Larys Strong).

Princess Rhaenyra knows all of this baby daddy talk is a disruption in the kingdom and decides to move her brood Dragonstone. She finds Laenor in the courtyard sparring with his friend/lover Qarl Correy and says that Laenor can bring Qarl. “We need every sword we can muster,” Rhaenyra explains.

From the next episode’s previews, things aren’t all hunky dory for the Targaryen and Velaryon clans.