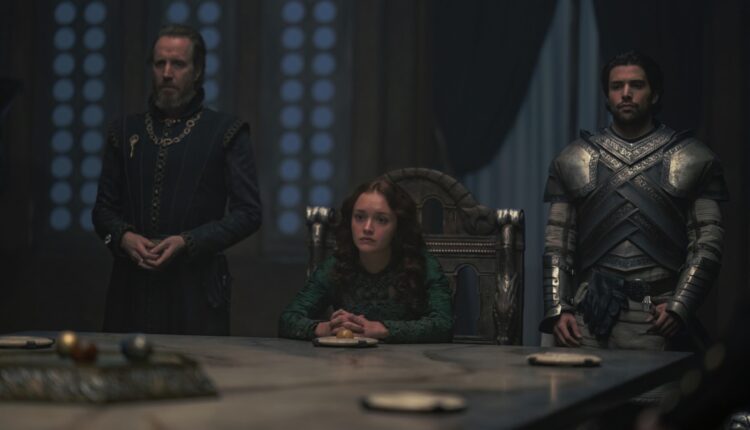 A coup, a conflicted queen, Ser Criston Cole continues to be awful, Llarys Strong ups his creepiness, Princess Rhaenys reveals how much of a badass she is, and more in “The Green Council” episode of House of the Dragon.

As a consumer of way too much television, I am sharing my thoughts on a few of my favorite TV shows. Here are a few of my miusings [sic] regarding the “The Green Council” episode from TV House of the Dragon:

King Viserys Targaryen now dead, Queen Alicent and company make their move to make Aegon king. Otto announces that the king is dead and that his dying wish was for Aegon the Aess to replace him. It quickly becomes clear that several members of the Small Council, led by Otto, are relieved at this because they’d been secretly planning as much already. This news leaves Alicent surprised, Lord Commander Westerling disgusted, and old Lord Beesbury blustering.

Alicent pieces together that Otto (the Queen’s father) and the rest of the council mean to kill Rhaenyra to prevent her and Daemon from attracting enough followers to challenge Aegon. This is not what she wants and makes that clear to her father.

Llarys Strong’s foot fetish was on full display and the show upped the creepiness of his character. Larys is known as “Clubfoot” because he was born with one foot curved inward, and his foot fetish seems driven more by this than by any real interest in Alicent herself (though he did kill his whole family for her).

All signals pointed to making Aegon king. While there were a few bumps along the road, a very reluctant Aegon was made king by the end of the episode, although his reign could have been the shortest reign ever, thanks to Princess Rhaenys.

As the Greens make moves to put Aegon on the Iron Throne after the death of King Viserys, Rhaenys is held prisoner in her chambers. She’s able to sneak out into the streets of King’s Landing in disguise, thanks to defector knight of the Kingsguard Ser Erryk Cargyll. During King Aegon’s coronation ceremony, Rhaenys sneaks into the Dragonpit to mount Meleys, bursting forth from the ground in an explosion of dust and stone.

Alicent and company shiver in fear as the dragon inches closer and closer to them, but Rhaenys never screams the fiery command: “Dracarys!” Instead, Meleys menacingly roars and flies then off with Rhaenys, leaving nary a scratch or burn on any of the Greens.

In next week’s season finale, Rhaenys goes to Dragonstone to warn Princess Rhaenyra of the situation. “The Greens are coming for you, Rhaenyra,” Rhaenys says. “And for your children.”

The shock on Rhaenyra’s face could stem from the fact that the Targaryen family had just recently made amends. However, it would seem that the princess is considering avoiding bloodshed and bending the knee, something her husband, Daemon advises against. “You cannot bend the knee to the Hightowers,” the Rogue Prince says. “They stole your birthright.”

In other words, shit is going to hit the fan.