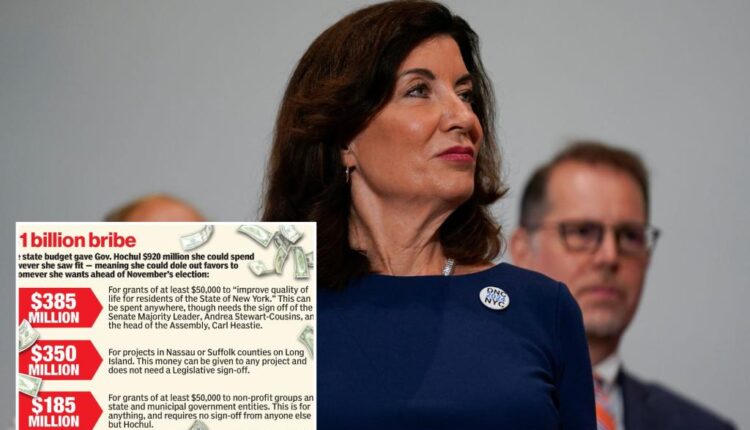 She planned the game long ago, making it a top priority in state-budget talks to create a slush fund of nearly $1 billion that she can bestow on “capital projects” as she alone pleases.

Other pols have some say over another $700 million or so, for $1.6 billion total in authorizations that came out of nowhere — even insiders having heard nothing of it ’til it was already law.

No wonder she refused to fight for real fixes to the no-bail law and other disastrous criminal-justice reforms: She couldn’t risk the wrath of the Legislature’s pro-crime leaders when she wanted them to hand her nearly $1 billion to spend however she chooses.

The Legislature OK’d lots of other dubious funds, like the $10 billion in microchip-plant subsidies also slipped into the budget out of the blue at the last minute. (Hochul recently used that to offer $6 billion for the Micron plant in Syracuse.) But at least there’s a veneer of strings attached, of real democratic oversight with checks and balances on such spending, even if it is basically pork.

Yet a billion-dollar blank check is beyond the pale. Of course it’ll go for projects that sound great in the press release; that’s the entire purpose. But no one else is looking at whether it makes the least sense, or what donations Hochul’s getting from the folks who actually pocket the cash — let alone whether that “vendor” offers the best price or can even deliver on his or her promises.

Who could fault $10 million for a Long Island medical-research center? No one, when only the gov and her minions have the details. (That’s where the devil is.)

This has the added “benefit” that the donors don’t have to grease any other politicians’ hands to qualify, so the full bribe can go to Hochul’s campaign (however many family members or other third parties the donor needs to wash it through to meet the letter of the law).

No wonder that this gov, in barely over a year on the job, has raised at least $10 million more than even Gov. Andrew Cuomo (no piker at the pay-to-play game, though his right-hand man and other close associates went to prison over it) ever did for a single campaign.

But, again, that’s just the gravy: Mainly the events are meant to convince voters that Hochul’s delivering for them — see the shiny new gifts! And you have only the gov to thank!

Indeed, Assembly Speaker Carl Heastie and top state Senate leaders Andrea Stewart-Cousins and Mike Gianaris betrayed their oaths to go along with this legal corruption. Was keeping New York’s laws so criminal-friendly worth that much to them?

Realistically, however, Hochul is the only elected the voters have a shot at punishing for this squalid maneuver. Vote for Lee Zeldin, who won’t even meet with anyone with business before the state, or the corruption will only grow even more obscene in a second Hochul term. Who knows how she’ll sell out the public interest next?