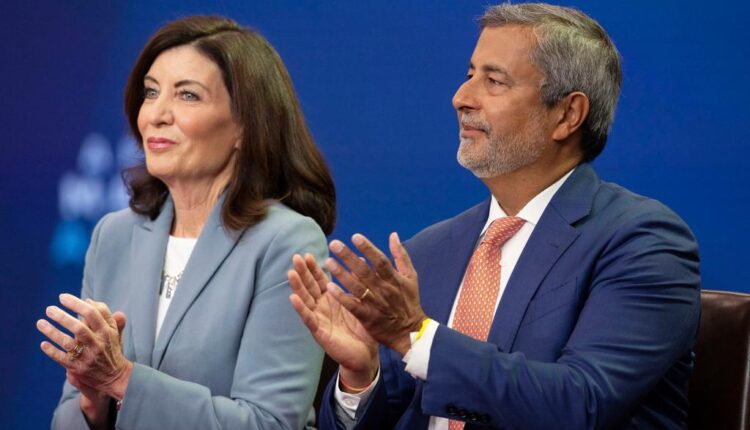 Empire State Development, which has a notoriously spotty record on marquee tech projects — witness the humiliating failure of Andrew Cuomo’s Buffalo solar plant — has finally released two more documents on the specifics of the Micron deal.

One is a study on the alleged economic benefits of steering $5.5 billion in public monies to Micron, which claims around 9,000 jobs within Micron and almost 42,000 in knock-on jobs outside the firm by 2055, resulting from two phases of investment by Micron.

Bull. The study’s dated a week after the deal was signed — a clear signal that Hochul’s minions created the numbers after the fact, to justify a decision she’d already made.

Don’t believe us? Just look at the other document, a term sheet laying out some details of the state’s agreement with Micron.

That sees just 4,680 Micron jobs by 2035, when phase one ends, with the rest to come in the nebulous phase two. It specifies no hard knock-on jobs numbers, let alone in the absurd ratio (4.6 outside jobs for every one within Micron) the study imagines.

That figure is all the more nonsensical given that a big chunk of those outside jobs (like those involved in building the plant) would be governed by a project labor agreement — jacking up the cost by excluding non-union workers, who make up around two-thirds of New York builders and contractors and nearly all in the Syracuse area.

So these are jobs most locals can’t qualify for, and the added cost helps explain why Micron demanded so much.

Plus, as The Post revealed, subsidy per head for each job within Micron works out to $611,000 — assuming all 9,000 get created. That’s about five times the rate for the Amazon HQ in Queens that US Rep. Alexandria Ocasio-Cortez and state Sen. Mike Gianaris killed.

Other perks tossed into the deal include a $283 million effective tax break, sweetheart rates on water and electricity and $22 million in grants from National Grid.

And this is Hochul’s only answer when she’s asked about economic development: a single, unbelievably subsidized project that does nothing about the high taxes, soaring costs for (increasingly unreliable) energy, ham-handed regulation and other issues that make New York’s business climate second-worst in the country (just above New Jersey).

Her economic vision is as bankrupt as her efforts on crime. New York needs real opportunity — which is why New Yorkers need to vote for Lee Zeldin and every downballot Republican come Tuesday.

Some very cool photos from the Concours of Elegance 2022