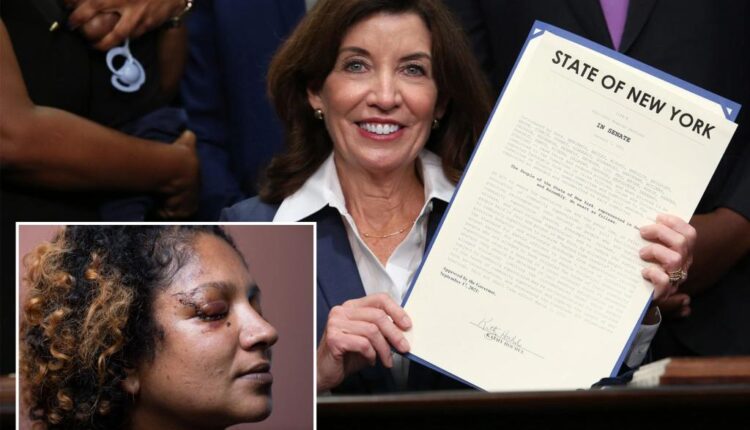 In one of her first acts as governor after replacing Andrew Cuomo when he resigned in disgrace, Kathy Hochul signed a piece of parole reform, the Less Is More Act. Parolees are released under supervision with set conditions before they’ve served their full sentences on the premise they’ve been rehabilitated.

Less Is More — formerly known as the Benjamin Bill for its biggest supporter, Hochul’s first Lt. Gov. Brian Benjamin, now under indictment — makes it virtually impossible to reincarcerate parolees who violate those conditions.

It’s insanity. As is Hochul’s latest move — upping the amount of cash the state gives to crime victims instead of making sure there are fewer of them. It’s yet more reason to vote her out of office next month and install Rep. Lee Zeldin, who will bring some sanity to the state.

What is the point of placing a convict on parole if there are no consequences for failure to abide by the terms? Such a law renders parole officers, prosecutors and courts powerless to keep our communities safe. Murderers and child molesters are free to violate parole without fear of going back to prison. Domestic abusers and rapists don’t have to abide by geographical limitations put in place to protect their victims as these technical violations are no longer enforceable.

Who would write such a horrible piece of legislation?

At the signing ceremony, Emily NaPier Singletary, co-founder of a group seeking to “dismantle systems of punishment,” proudly boasted that her husband, Derek Singletary, who is serving a 20-year sentence for stabbing Darnell Brown to death, wrote this piece of legislation. Derek Singletary will be under parole supervision at some point and had already been sent back to jail on violations before killing Brown.

That’s right — a convicted murderer and gang member wrote his own get-out-of-jail-free card, Brian Benjamin helped him, Dems voted for it, and as one of her first acts as governor, Kathy Hochul signed it into law. Apparently the bloodbath bail reform created was not enough.

As Emily NaPier Singletary went on and on about how she and her husband have been separated for 11 years, she never mentioned it was because he killed someone. Never did she bring up that Darnell Brown was killed after leaving his 27th birthday party or that his family mourns his death every year on his birthday.

That Mrs. Singletary was on stage with the governor complaining about the circumstances of seeing her husband, who robbed the Browns of ever seeing their son again, just goes to show the depraved indifference toward human life sweeping across this country.

None of these so-called “advocates” or elected “leaders” ever even mentions the victims. A sitting governor signed a piece of legislation written by a cold-blooded killer. How much further down the rabbit hole can we possibly go?

Within weeks of Hochul signing Less Is More, two people were brutally murdered in New York City, a pregnant woman and a Columbia University student, while a 13-year-old child was shot on the way to school — all by parolees with extensive, violent records. Most recently, parolee Waheed Foster beat Elizabeth Gomes so badly she might lose sight in one eye.

It’s happening across the state, in cities and suburbia. Rochester is seeing a violent-crime increase, and a Buffalo woman was raped sleeping in her bed by a parolee who wasn’t even detained after being charged. When you constantly release and re-release violent recidivists and remove deterrence to commit violent crime, there will be innocent casualties and people will die.

Gov. Hochul and Albany are patting themselves on the back for having just increased certain reimbursements for crime victims. But the amount back for funeral/burial expenses remains the same and is well below a funeral’s average cost. If our so-called “leaders” are going to keep getting us killed, the least they could do is cover the entire funeral.

Stopping the senseless violence and release of recidivists would be even better though.

They do not get to create this crisis and then act like saviors for handing out crumbs that don’t even come close to covering the cost or trauma of victimization, especially losing a loved one. Hochul and Albany lawmakers have waged war on families across the state by issuing blanket release mandates.

It is time to let them know we plan on fighting back at the ballot box. We must elect Lee Zeldin as governor and vote down the line for those who will stop this insanity.

Jennifer Harrison is a survivor of a homicide victim and the founder of Victims Rights NY, as well as a member of the Victims Rights Reform Council and the Suffolk County Sheriff’s Office Community Advisory Board.

Netflix launches Profile Transfer to get freeloaders off your account