Hochul ekes out a win — but what does her weakness mean for NY’s future? 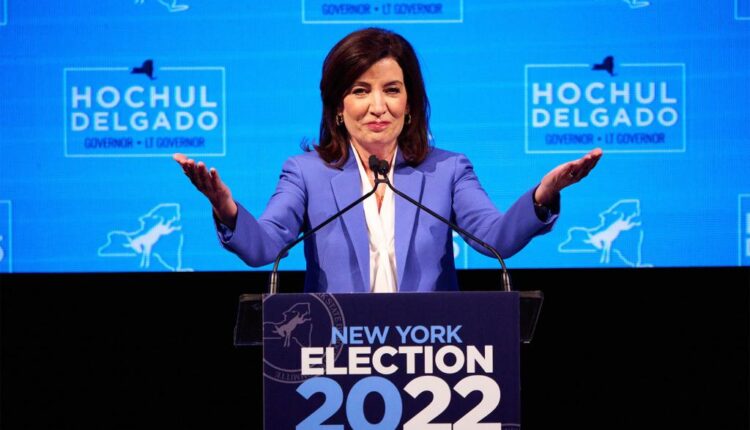 And so the first truly competitive New York gubernatorial election in a generation came to an end Tuesday with an unexpectedly close Kathy Hochul win in a deep-blue state — but with three critical questions left hanging.

This much seems clear: Kathy Hochul really rained on her own parade.

From the day she became governor 14 months ago, she failed to make a single significant issue her own.  That is, she didn’t give voters one meaningful reason to vote for her beyond the fact that she was not her opponent — that she was not a Republican.

Indeed, if it were not for the numbers — Democratic enrollment eclipses the GOP — it would have been game over for Hochul long ago. The only thing authentic about the lady was her deer-in-the-headlights look — and that rang true because she truly was a deer in the headlights.

Inexperienced, inept and unwilling to engage on matters of importance to New Yorkers, she managed to boost a Donald Trump Republican into contention. In New York. Imagine that.

She had flailed through her first legislative session, having little significant impact on New York’s budget and taking a knee before the Legislature’s progressive majorities on policy issues — particularly on public safety.

On crime itself, she gaslighted. When it wasn’t a nonissue driven by “data deniers,” it was a problem to be solved solely by buffing up the Cuomo administration’s functional near-ban on rifles. This had nothing to do with street crime; it angered key upstate and suburban voters and it betrayed a shocking lack of seriousness on a matter of literal life-and-death significance.

She had nothing serious to say about bread-and-butter issues: inflation, New York’s lagging COVID recovery and its economically stifling taxes.

She ferociously embraced the progressive line on energy — especially the natural-gas production potential of the state’s Southern Tier. As voters looked to the home-heating season, this mattered.

She was careful not to anger the teachers unions and school boards, scarcely mentioning public education at all when the negative impact of COVID-driven classroom shutdowns had become undeniable.

OK, that’s what she didn’t do. But what did she do?

She ran a three-part campaign:

These were no small matters in New York — and, in the end, they seem to have helped substantially. (Them and her mega-millions in pay-to-play-driven campaign cash.)

On the other hand, everybody doesn’t like Andrew Cuomo these days; whether that will change someday isn’t clear, but it’s a slender reed upon which to build a political campaign.

And while abortion has potent emotional impact in New York, as a practical matter Nelson Rockefeller removed abortion access from the debate with America’s most liberal abortion law back in 1972. It resonates, for sure, but enough to overshadow crime and the economy?

Finally, no one can reasonably deny the significance of New York electing its first female governor. The fact is that three of the state’s six statewide offices are occupied by women, and women serve in elective legislative, judicial, prosecutorial and government positions from Suffolk County to the Niagara Frontier. Trail-blazing may well have lost its luster.

None of this is to denigrate Republican Lee Zeldin’s effort. He ran a focused, energetic and issue-centric campaign. Credit him for keeping what the party enrollment numbers say should have been a blowout close.

So what’s next? High drama, most likely.

Constitutionally and traditionally, New York is a strong-governor state. But New York governors usually come to office in cakewalks — Andrew Cuomo won 60% of the vote four years ago — and this election produced a no-mandate-attached relative squeaker.

Hochul’s weak performance surely will embolden an already aggressive, hard-left-leaning Legislature — even though the obvious lesson would seem to mandate a move toward the center. After all, Lee Zeldin’s surprisingly strong showing — and the ahistorical closeness of this contest — was no accident.

But Hochul’s uninspiring performance both in office and during the campaign, combined with the energy of the left, surely means mischief will be awaiting when the next legislative session begins Jan. 1.