Hispanics are refusing to be ethnic-grievance voters, and that’s a huge problem for Democrats 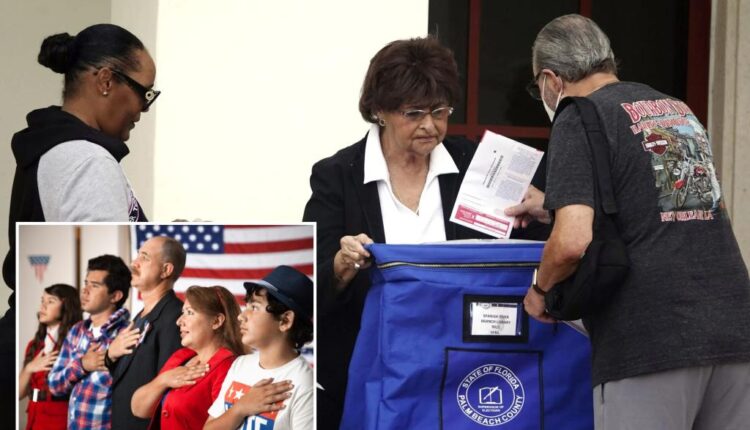 One of the most significant events in American politics is that Hispanics are, in effect, deciding that they are working-class voters rather than ethnic-grievance voters.

This is so momentous because it means that Democrats can’t rely on the monolithic Hispanic voting bloc they imagined would guarantee them an enduring electoral majority, and that the shift to the Republicans may be just beginning (the migration of working-class whites to the GOP has been happening over the course of a couple of generations).

Republicans don’t have to win Hispanics outright to change the calculus of American politics, only eat into Democratic margins.

In specific places, they’re doing even better. A Sienna College poll shows Gov. Ron DeSantis and Sen. Marco Rubio, both running for re-election in Florida, above 50% among Hispanics. A new poll for The Nevada Independent has Republican Adam Laxalt, challenging Democrat Catherine Cortez Masto, down by only 2 points among Hispanics.

It wasn’t supposed to happen this way. Progressives had Hispanics pegged as “non-white” voters, which meant they’d be animated by the same worldview as black Americans and become nearly as immovably Democratic. The arbiters of such things even cooked up a new term for Hispanics, “Latinx,” to signal their assimilation into the hothouse world of woke politics, with its kaleidoscope of genders and other bizarre priorities.

Yet “Hispanic” is an incredibly wide-ranging category including people from different countries and regions who may have lived here for generations or just got here recently. Generalizations are inevitably simplifications, but it’s safe to say they don’t have much in common with American blacks, who went through the uniquely searing experience of enslavement and systematic discrimination.

Within memory, blacks had to fight for the basic legal protections of citizenship, whereas many Hispanics got here after 1980, when the most fundamental civil-rights struggles had already been won.

In a piece for Spectator World, the Republican pollster Patrick Ruffini argues that Hispanics are tracing the basic trajectory of white Catholics as they assimilate, move to the suburbs and hew to traditional values out of fashion with the nation’s elite.

The same divides are evident on transgender sports, defunding the police and the importance of hard work.

The picture is of a constituency that is going to be skeptical of a party that made excuses for the 2020 riots premised on the notion that America is fundamentally corrupt, or that is on board the rush to embrace a non-binary future. Needless to say, this is not FDR’s Democratic Party, which had such a hold on white Catholics for so long.

None of this means the Hispanic trend toward Republicans is inexorable. Rather, it shows that, despite Democratic hopes, these voters are up for grabs, and their support has to be earned like that of other Americans.

Still no ban on Congress’ stox trades, Xi a threat like Putin and other commentary

iPhone 14 Plus delivery dates are starting to slip