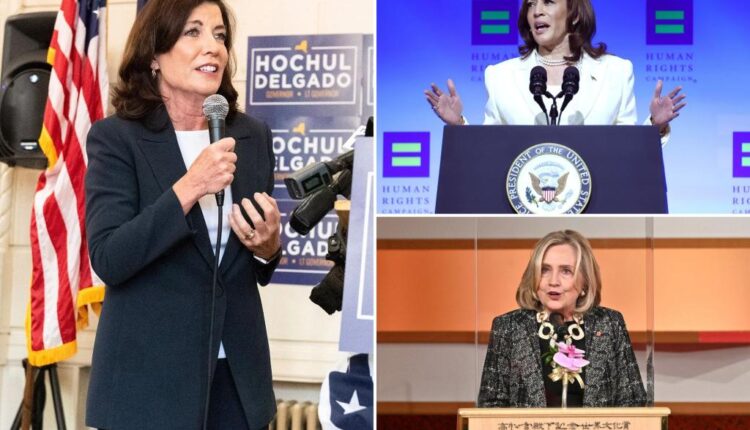 The word-salad bar is now open.

That is, Vice President Kamala Harris will be stopping off in the Big Apple Thursday to help drag Kathy Hochul’s stumbling campaign toward the finish line — and, oh, the possibilities are limitless.

The rally, naturally enough, is aimed at women — and why not? Three of New York’s six state-wide office holders are women, and a woman selected one of the men. This reflects the powerful presence of women at the polls and in public life here — which in turn speaks eloquently to how politics has changed in the Empire State in recent years.

Actual eloquence, on the other hand, will be in short supply at Barnard. New York, once ground zero for compelling political oratory, has been bereft since Mario Cuomo left the stage in 1994.

Harris, of course, is in a class by herself. An example of her stump speech, from a year ago: “We must together. Work together. To see where we are. Where we are headed, where we are going and our vision for where we should be. But also see it as a moment to, yes, together, address the challenges and to work on the opportunities that are presented by this moment.”

And so it goes. It’s deliciously mockable, for sure — but it’s also revealing: Kathy Hochul thinks that a woman who speaks fluent gibberish has something important to say to New Yorkers beset by crime, inflation and related social instability — and that’s just insulting.

Hillary, of course, speaks for herself — although not very convincingly. Otherwise, she’d be midway through her second White House term right now.

And while AG James, New York’s top law-enforcement officer, occasionally talks, it’s almost always about her obsession: Donald Trump. This truly grates alongside her dead silence on the crime wave now cresting over the state’s cities — aided and abetted by the woke DAs James ignores.

This strikes many as an abdication, not that James seems to care. Nor do any of Thursday’s headliners, for that matter.

Certain to be missing amidst the high-wattage smiles will be a woman who truly has something to say: Tammy Hudson, the mother of Keaira Bennefield — a 30-year-old Buffalo woman executed in front of her three children last month by an abusive husband free to kill because of New York’s cashless bail laws. Hudson blames Hochul for her daughter’s death; it’s a complicated matter, but she has a point. Hochul didn’t approve the bail “reforms” that arguably led to the shocking murder — but she’s done nothing to mitigate their impact, either.

“We need to be heard as people who are going through it,” says Hudson. “I’m sick of the ‘Oh, sorry, is there anything I can do?’ when there is nothing you can do because that person is never coming back.”

Now there’s eloquence — unvarnished and angry, but straight from a broken heart and all the more powerful because of it.

Barnard could use a dose of that Thursday, but the best that can be expected is deflection — especially from Hochul herself. Wednesday she blamed “the system” for Keaira Bennefield’s murder — unblinkingly ignoring the fact that she is the system, or the most important part of it.

This leads to only one reasonable conclusion: She has no clue, and she hopes New Yorkers don’t notice. The sisterly solidarity is just camouflage.

Will Twitter get any help shaming Team Biden out of its endless lies?