Hillary Clinton goes to bat for her clone, Kathy Hochul 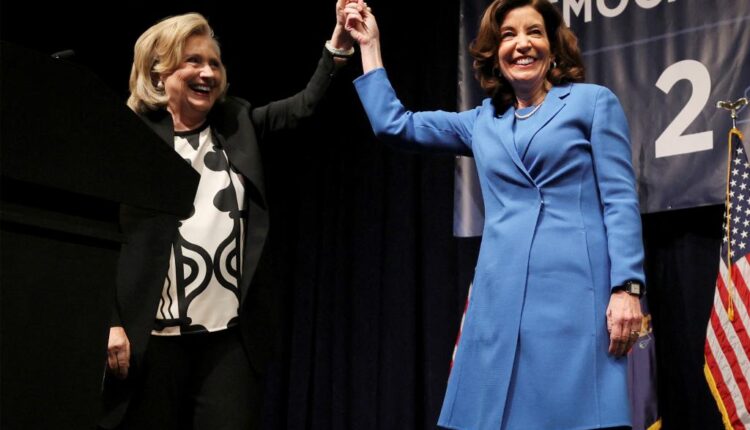 It’s ironic because Clinton was 2016’s prohibitive presidential favorite – and the candidate now forever known as the only Democrat in America who couldn’t beat Donald Trump.

And here is Hochul, also a morning-line sure-shot, struggling mightily against a high-profile Trump acolyte in cobalt-blue New York.

It’s amusing because Clinton and Hochul’s respective campaigns are so similar: strategically clunky, simultaneously uninspired and uninspiring – and featuring candidates incapable of cracking a convincing smile even in friendly crowds.

And it’s puzzling because Hillary’s stump style hurt big-time – and bringing her into the current contest, even at a super-supportive women’s college rally, is at best a tactical mystery. Hochul already has Manhattan’s Upper West Side, after all, so why energize the 45 (of 61) New York counties Trump carried in 2016 to come out and vote against Hillary one more time?

“What difference does it make, at this point,” the former secretary of state responded, infamously, when asked why she hadn’t personally comforted family members following the 2012 Benghazi massacre.

“I don’t know why [crime is] so important,” Hochul declared last week during a campaign now largely defined by New York’s soaring street and subway violence.

Tone deaf? More like stone deaf. Whether their words were born of ignorance or arrogance or both, they helped sink Hillary – and they could well be chiseled into Hochul’s political headstone too.

Here’s a safe bet: Such words would never have occurred to, let alone be spoken by, the fellows who ushered Hillary and Hochul to political prominence: former president Bill Clinton and exiled former Gov. Andrew Cuomo, respectively.

The two men brought a level of authenticity to their campaigning that clearly was lacking in Hillary’s 2016 effort – and is all but MIA in Hochul’s.

Okay, maybe they were faking it – Andrew especially. But if so, they did it well enough to win big. Hillary couldn’t – and while the book is still open on Hochul, electoral H-Hour is near.

Analogies can take one only so far, of course. The 2016 Clinton contest was bewilderingly complex, and for stakes infinitely higher than anything on the table in New York this year.

But there are constants.

NBC News, in a post-2016 analysis, termed Clinton and Trump “the two most unpopular candidates in modern presidential campaign history” – and this seems fair enough.

But Trump overcame that in large measure by appealing to voters who felt excluded from the process – who, in fact, were allergic to the elitist progressivism burned into 21st century Democratic policies and politics.

Of course, that didn’t work the second time around, no matter what the former commander-in-chief says, but the practicalities of the 2016 election cycle seem lost on Kathy Hochul & Co. – and productively absorbed by Republican candidate Lee Zeldin.

Embracing progressive policy nostrums – on energy, on crime, on the Second Amendment, on what’s euphemistically termed “reproductive rights” – always will pay some dividends in New York. Hence the Hochul approach.

But ideology fades before the supermarket cashier in times of high inflation and economic insecurity. And it simply evaporates when people fear for their safety in the streets and on subway platforms. Thus does the down-home, if sometimes frantic,  Zeldin strategy resonate.

The contrasts certainly help explain why polls have narrowed so dramatically. And why the RealClearPolitics news-aggregation site suddenly termed  New York’s once-predicted gubernatorial blow-out a toss-up.

That Hillary Clinton and Kathy Hochul are campaign clones is a big factor, too. And this should become even more evident amid the theatrical smiling at Barnard College Thursday afternoon.