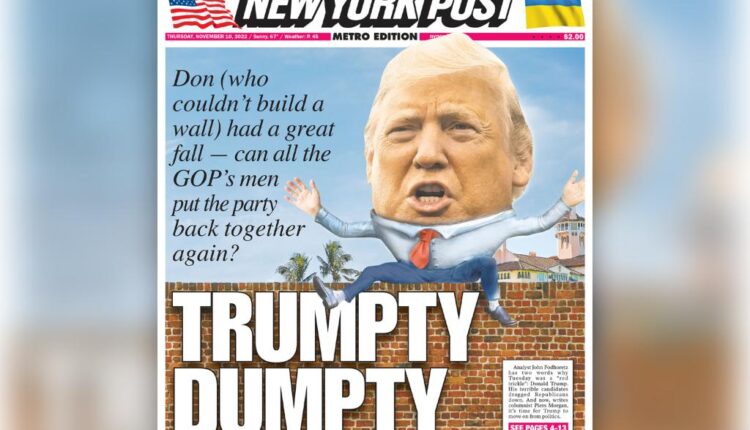 Hey, Lyin’ Ted and Sleepy Joe: Meet Toxic Trump. You know, if the former president had any self-knowledge or even the slightest ability to be self-deprecating, he might consider giving himself this alliterative nickname.

After three straight national tallies in which either he or his party or both were hammered by the national electorate, it’s time for even his stans to accept the truth: Toxic Trump is the political equivalent of a can of Raid.

What Tuesday night’s results suggest is that Trump is perhaps the most profound vote repellant in modern American history.

The surest way to lose in these midterms was to be a politician endorsed by Trump.

This is not hyperbole.

Except for deep red states where a Republican corpse would have beaten a Democrat, voters choosing in actually competitive races — who everyone expected would behave like midterm voters usually do and lean toward the out party — took one look at Trump’s hand-picked acolytes and gagged.

Liberal fundraisers actually put money behind Trump-endorsed candidates in GOP primaries all over the place to help them prevail so that Democrats could face them in the general election. It was transparently cynical and an abuse of our political process. But it worked like gangbusters.

As Kevin Robillard of the Huffington Post noted on Wednesday afternoon, when a Michigan Democrat named Hilary Scholten was finally declared the winner of her House seat against a raving lunatic named John Gibbs: “With this race call, every single Republican who won their primary with help from Democratic meddling has lost in the general election.”

Gibbs is an example of Trump’s monomania. A former official for Trump’s Department of Housing and Urban Development, Gibbs Tweeted that officials associated with Hillary Clinton participated in Satanic rituals. But no matter! Gibbs believed the 2020 election was “stolen” from Trump, the only stance that matters to the former president.

Trump backed Gibbs in the primary to unseat a sitting Republican, Peter Meijer, because Meijer had the temerity to vote in favor of impeachment after the shame of Jan. 6.
Trump got his way. Republicans lost the seat.

In almost every place a Trumpster lost, there had been a regular Republican who could and should have been the party’s nominee — a nominee who could have taken advantage of the uniquely horrible facts and fundamentals confronting Democratic candidates in 2022.

But then Toxic Trump came in to these races, picking the candidate who bowed lowest — or, as in Pennsylvania, went for a snake-oil doctor salesman because, it seems, his wife enjoyed watching Mehmet Oz carny-bark on afternoon TV.

And the independent voters history tells us would ordinarily have flocked to the GOP said, “Oh, man, what is that stink?”

In the past four midterms, indies chose the party that did not hold the White House by double-digit margins. In 2018, with Trump as president, the Independent vote was 12 points in the Democrats’ favor. In 2006, with George W. Bush in the Oval Office, the number was 18 points. When Obama was president in 2010 and 2014, Indies went 16 and 12 points in the Republican direction respectively.

This week, Independents went 49-48 for the Democrats. One point — in the other direction.

Independents made the difference then and they made the difference on Tuesday. They didn’t want to keep hearing about voter fraud that didn’t exist, or about how the world done wrong a multi-billionaire boo-hoo whiner who lost his reelection bid due to his own incompetence.

Voters have their own problems. This election was about them, not Toxic Trump’s pathological inability to accept his own failure — and his desperate need to elevate cringe-inducing boot-lickers while punishing politicians capable of an independent thought.

The British political figure Oliver Cromwell once said about other British politicians who had overstayed their welcome and were ruining the country, “In the name of God, go!”

David McCormick, a former undersecretary of the Treasury Department under George W. Bush, was recruited to run for the Pennsylvania seat vacated by Republican Pat Toomey. But Trump favored TV personality Oz, and attacked McCormick in the primary. Oz lost to John Fetterman, a Democrat was so addled by a stroke he could barely debate.

Mitch McConnell and other Republican leaders very much wanted Arizona Gov. Doug Ducey to run against Democrat Mark Kelly for senate. But Trump blasted Ducey for not illegally overturning the 2022 election results in Arizona, and the governor decided not to run. The race hasn’t been called, but it seems that Kelly will defeat election denier Masters.

The Republican candidate for senator from New Hampshire got Trump’s support for saying 2020 was stolen during the primary. But when he wavered in the general, Trump attacked him, and when Bolduc lost to Democrat Maggie Hassan, Trump disowned him.

Trump was all-in on the former NFL player despite doubts from other Republicans. Walker way underperformed fellow Republican Brian Kemp (whom Trump refused to endorse or campaign for because he wouldn’t illegally overturn Georgia’s vote), who cruised to re-election as governor. Walker now faces a runoff with Sen. Raphael Warnock.

The GOP thought they had a shot at the Pennsylvania governor’s seat, but Trump boosted the election-denying Mastriano, who lost to Democrat Josh Shapiro.

She earned Trump’s endorsement, and a primary win, by claiming 2020 was stolen. But Republican Dixon lost the governor’s race in Michigan to incumbent Gretchen Whitmer.

Why I fought to clear my name in Jeffrey Epstein allegation