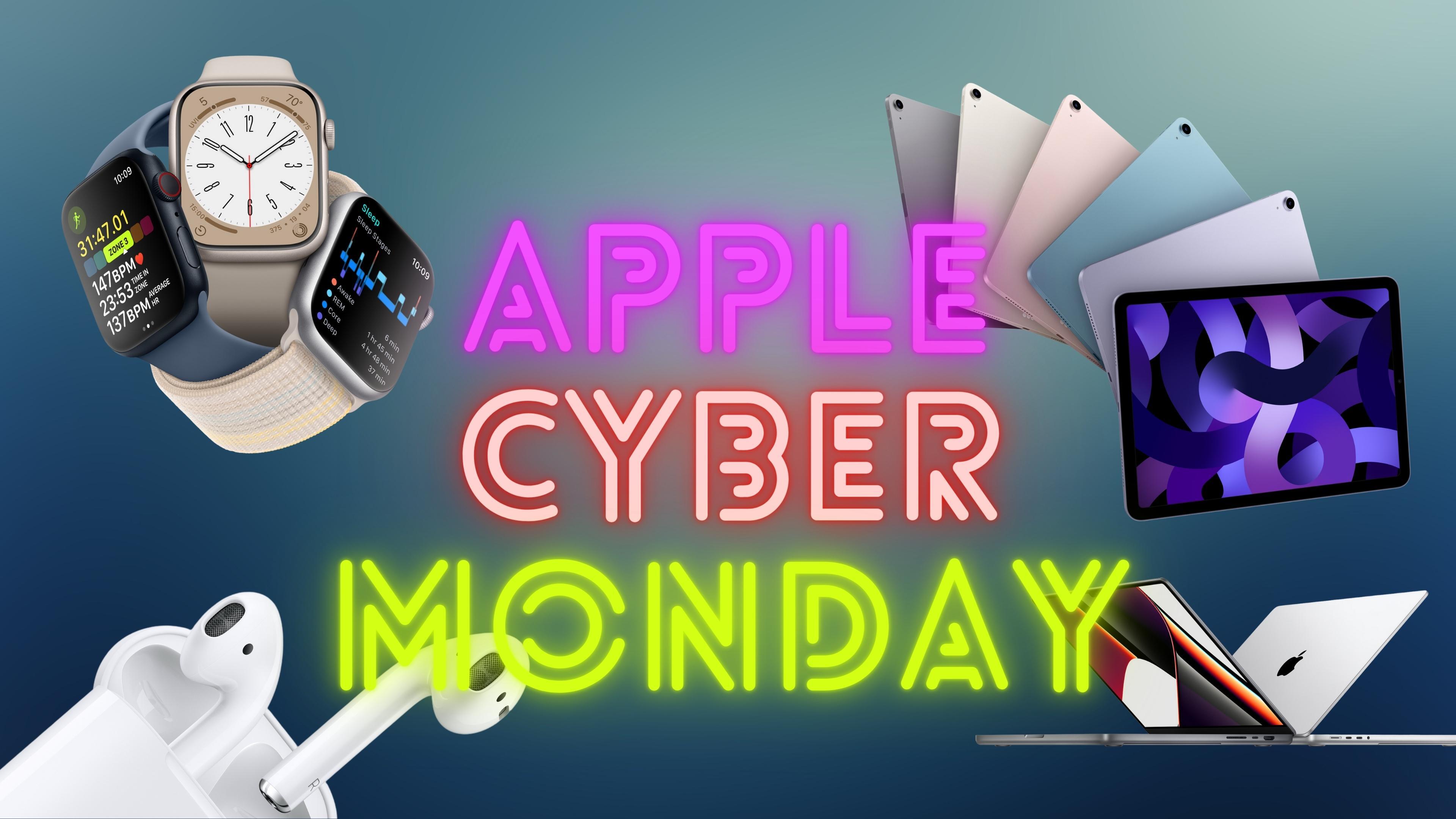 Cyber Monday is now in full swing, with massive discounts on Apple products across the board. There are some incredible prices on Apple gear and accessories, letting you save as the holidays draw in. Now is the perfect time to grab an Apple Cyber Monday gift, with savings on Apple Watches, iPads, MacBooks, iPhones, and more. Don’t worry if you think you’ve missed the Black Friday deals – there are still loads more deals in our Cyber Monday Apple deals roundup.

There are bucket loads of Apple Cyber Monday deals in the list below, with reductions on everything from those Apple products to cases, Homekit devices, and even app-enabled toys. We’ve laid it all out in easy-to-read and browse sections, with the very best deals right at the very top. So without further ado, here are all of the Cyber Monday Apple deals available right now.

If you’re only after a very specific Apple product then you can check out some of our other Cyber Monday deal pages:

There are loads of deals on iPads, but our favorite is the deal on the iPad from last year. No, it may not be the newest, but it’s very well priced, with a $60 saving on full price. The cheapest way to get an iPad in your pocket.

Logitech keyboard cases are some of the best around and are officially made with Apple’s blessing meaning they are compatible with smart connectors and don’t just rely on Bluetooth.

There are loads of great deals on Apple Watches, with some lowest-ever prices – the best deal being the Apple Watch Ultra. There’s a $60 discount on the Watch at Amazon at the moment, letting you pop a new watch on your wrist for less.

There is one deal that stands above all the rest with a monster saving AND some cool freebies – and we mean super cool freebies. You get a massive bundle of stuff with this one, but there’s only one day left to get involved!

There have already been some big sales on the MacBook line, with lowest prices on some of the latest devices. At the moment, our favorite deal is this unbeatable price on the MacBook Air M1, where you can save $200.

One of the best deals on AirPods is that massive 50% off on AirPods 2 at the moment. That’s the lowest price of the AirPods to date, and one well worth snapping up – they do like to go out of stock.

There are some great AirPods Max Alternatives out there, and some of them have had some big discounts over Cyber Monday. One of the best deals is this hug saving on the Sony WH-1000XM4.

There are only two Apple Pencils to choose from, but both are at their lowest ever prices right now!

The best Apple TV deal is a tiny saving on the brand-new model, which is miles cheaper than the previous model. There are also savings on the old one to be had, so watch out for those too.

You can grab some great deals on portable SSDs, with some big Cyber Monday sales. Get more storage for less.

Grab a monitor this Cyber Monday, and land a great deal. Add more screen to your desk, and increase workflow for less cashFlow!

The Apple-made Magsafe battery pack for iPhone is currently an absolute steal at the moment, with $25 off.

A mobile virtual network operator, or MVNO for short, is a essentially a wireless network provider that piggybacks of the back of an existing providers wireless coverage. This saves on maintenance, given most are online and there’s no need for a physical store. Those savings are passed along to you, the customer, along with contracts that you can pull out whenever you want, or prepaid options. These are some of the best deals around from MVNOs – and remember to bring your own phone!

The LG C2 OLED range is probably the best TV on the market, and this stellar 55-inch deal is our pick of the bunch.

Need yourself a smarter home (and nothing to do with that weird nineties Disney channel movie) and don’t want to spend the world? These are some great deals on Smart Home kit this Cyber Monday, from Alexa to Homekit.

These toys make the most of your iPad or iPhone as they come with compatible apps that bring them to life. You’re able either control them, bring more information onto the screen or by using the camera for augmented reality experiences.

Here at iMore, we pride ourselves on not only giving out the best buying advice we possibly can, but trying out the products that we cover so that we know you’re only getting the best possible. We do this through our expert reviews – our team has years of experience testing and reviewing all kinds of tech, equipped to show you what you should and shouldn’t be spending your hard earned cash on.

These are our key reviews to help you know which Apple kit is for you:

What are Apple Cyber Monday deals?

When Black Friday comes to an end, the Cyber Monday deals come out to play – it’s another opportunity for retailers to give you the best prices possible on the tech you’re looking for.

There are reductions across the board at places like Amazon, where you’ll find massive sales on Apple kit over the weekend and over Monday itself.

When do the Cyber Monday Apple deals end?

Some of these deals will go on into the following week – but for the most part, they will finish by the end of the day on Monday. That’s not taking into consideration whether the products themselves have sold out. Either way, if you spot a good deal, its worth dropping the hammer as soon as you can.

Is it worth waiting for Cyber Monday?

Now that’s the question on all our lips really – and one that’s difficult to say for sure. The deals we’ve got now are pretty excellent already, and they might run out of stock, so buying now is actually fairly sensible. On the other hand, some of those deals might get better over the day, so you might want to wait and see. Personally, we’d say go for it – but if you’re a chancer, then you could save even more.

Do you need an Amazon Prime Account for the Cyber Monday deals?

For most, even on Amazon, no. For some, however, where there are some really big discounts, it looks like you might. Thankfully, its super easy to grab a thirty day free trial of Amazon Prime, and then you can cancel as soon as Cyber Monday is over so that you don’t get caught out in a months time.