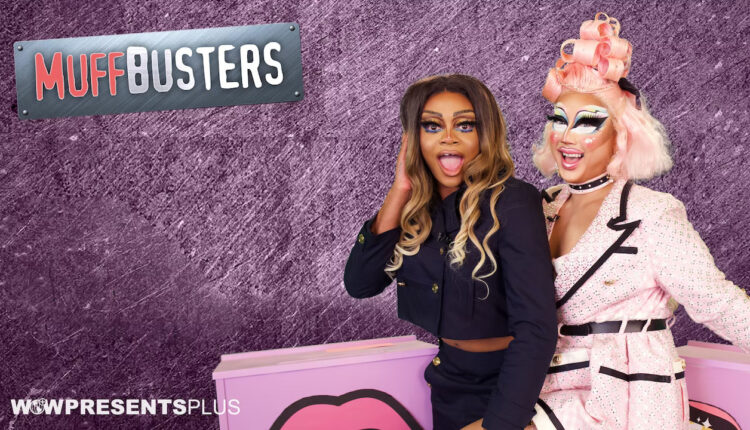 RuPaul’s Drag Race season 12 favorites, Rock M Sakura and Heidi N Closet (the season’s Miss Congeniality) have teamed up for a new series airing on WOW Presents Plus, and fans of a certain myth-busting show will want to definitely tune in.

On Muff Busters, Heidi and Rock put well-known myths (and each other) to the ultimate test. In each episode, Rock and Heidi take a widely accepted myth, read it the house down, and spill the tea on what they believe are the facts before testing their hypotheses. If you wondered if the five-second rule is truth or friction, if you really need to wait 30 minutes after eating to jump into the pool or if an old dog can learn new tricks, this is the show for you.

We had the chance to chat with Heidi and Rock about the new series, their undeniable chemistry, the other reality shows they’d like to take on, and more in our exclusive interview.

How did you get approached to do this show?

Rock: It kind of came out of nowhere. We were both cast on binge queens and the first day that we recorded that was really electric. We had so many laughs not only with the crew but with each other and just from that day specifically the crew was like “We need to do something with this. This energy needs to be captured. And after our first episode of Binge Queens came out there was so much clamor for me and Heidi to have a show together on WOW Presents Plus so we stayed in touch with one of the producers from Binge Queens and she messaged us and was like “We have an idea for your show. This is the concept. Do you guys have any input on what you want to do?” And so, when we were approached about it, it came out of nowhere but also materialized before our eyes.

Heidi: We were very nervous at first!

Rock: I was a little bit less nervous because I knew for this one I could piggy back off of Heidi’s fame and I knew that people would watch because they love seeing season 12 girls together.

Heidi: Because it makes up for all that lost time!

Were either of you a fan of Mythbusters before you got your own show?

Heidi: Being the young person that I am. Just a little bit too young to have seen Mythbusters…No, I’m joking! I actually have watched a couple episodes of it and I have enjoyed it. Not necessarily something I would have done growing up because being the Christian woman that I am…No, I’m joking!

Heidi: I didn’t want too much of it growing up so I had a very loose concept of what the show was going to be like so I was like “OK. I don’t have too much about what this show is going to be but I kinda get the gist so let’s just go with it and let’s just use our natural chemistry together to make a great show.”

Rock: As for me, I was a fan of Mythbusters before. I used to watch the Discovery channel a lot since poor people only have like 10 channels so that was one of the channels I had. I used to watch Mythbusters a lot and I thought it was really intriguing and really fun that these people had the resources to explore all of these myths like with ballistic dummies and giant trucks and stuff. We don’t have any of that budget on the show, mind you. It’s nothing like that. So, if you guys think we’re stealing the idea, there’s no funding to steal the ideas. All the money goes to Heidi.

Heidi: Don’t say that, that’s a lie! That’s not true! I wish that was the case

You have such great chemistry together. How would you describe your friendship?

Heidi: Have you ever played Dungeons and Dragons? I would say ‘chaotic good.’ We mean well but the energy is just crazy. It’s just like a live wire bouncing back and forth off each other.

Rock: Also, for those of you who believe in astrology, Heidi and I are both Libras. I’m not very good with astrology but we’re both very charismatic so we’re good at working with each other. Also, too, Heidi and I both relate to each other in a lot of similar ways. We were both poor going on to Drag Race, and we both have really busted drag.

Heidi: Speak for yourself

Rock: The only difference is I have nice toes. They tell us at WOW Presents, “When you do these green screen shows you only need to do drag from the waist up.” I said no – film Heidi from the toes up.

The show looks like so much fun, Is it fun to work on?

Do you ad-lib or improvise, or is everything scripted?

Rock: It’s just like your presentations in high school when you’re also gay and have ADHD so you don’t prepare anything and you just wing it.

Since Rock did a superhero series, what kind of crime-fighting duo do you think you would be?

Rock: Heidi, would you be the main superhero or the sidekick? Or would we be a duo?

Heidi: I think we’d be a duo. Like the Wonder Twins. “Wonder Twins power, activate!” That kind of vibe.

Did you learn anything that surprised you while working on this show?

Heidi: That you use more than 10% of your brain. That is something that I was gagged by. I was like “Really?!” All my life I’ve been told you only use 10% of your brain so I was completely gagged. I was like “No!” Now I just feel like I’ve been lied to my whole life. I feel like my life will never be the same after I found out that fact. You know when a child’s innocence is just ruined? That was my innocence being ruined.

Rock: For me, I’m a firm believer of the 5-second rule and to learn that not even one second is good for having food on the floor. I ate food off the floor this morning! I learned, but I didn’t learn.

Heidi: You learned the fact but you didn’t learn from it.

If you could do your own version of another reality show, what would you want to do (like cooking, home renovation, etc.?)

Heidi: Bring all the girls with me and we just start fighting.

Rock: I really want plastic surgery so I would choose The Swan from FOX.

What’s next for you?

How to watch Raymond & Ray, starring Ethan Hawke and Ewan McGregor, on Apple TV Plus

A look ahead to the Classic Motor Show 2022