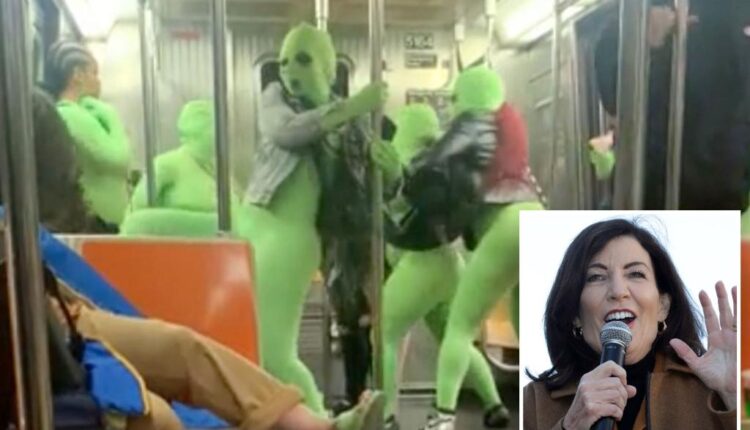 Muggers go to work in gangs, wearing neon-green full-bodysuits — and when one is caught and charged, it’s straight back to the streets because that’s the new normal in New York.

So thank you, Gov. Kathy Hochul. You didn’t sign off on those criminal-justice “reforms” three years ago, to be sure, but folks are wondering just how bizarre things have to get before you decide to roll them back.

That is, New Yorkers now get that the joke is on them — and they’re not amused.

Take the case of Mariam Issouf, 26 years old and an alleged member of the so-called Green Goblin crew that assaulted and robbed two teens on the subway on Oct. 2. Charged with a violent felony and then no-bailed, she walked out of court behind her lawyer Tuesday, her head under a black leather jacket.

She hadn’t done anything wrong, said the lawyer, with a straight face. Which is what lawyers do, of course.

Even when their clients have been caught on cellphone video, with a half-dozen or so others, dressed in full neon-green bodysuits — space-alien masks completed the ensemble — getting all rambunctious on a Times Square subway train at 2 a.m.

Two 19-year-olds were slapped around and robbed, and Issouf subsequently was charged with felony assault — but, hey, it’s all guilt by association. Because when folks are assaulted by people wearing neon-green bodysuits, and your client was at the scene wearing a neon-green bodysuit — well, who’s to say who did what to whom? Don’t be judgmental.

Wrong. Be very judgmental. Because the bodysuit is the point: When muggers are comfortable roaming in packs wearing what amounts to “Arrest me” signs on their backs, a moment close to terminal decline has arrived.

And when Hochul, Assembly Speaker Carl Heastie, Senate Majority Leader Andrea Stewart-Cousins, and every single legislator who voted for the “reforms” are just fine with that — with an election less than a month away — hope for positive change probably in the wind.

Hochul is running for a full term, and Nov. 8 could be the state’s last chance to push back until at least 2026. Indeed, who knows how contemptuous of public order New York’s leaders will have become by then — or what well-dressed muggers will be wearing to work?

Not for nothing has Hochul been smug about it all. And why shouldn’t she be — starting with a commanding party-enrollment advantage, working New York’s pay-to-play culture without a trace of conscience, and showing strong poll strength out of the gate?

But there’s a difference between smirking self-confidence and brazen contempt. And Kathy Hochul shows a lot of the latter.

Is she a progressive true-believer, as she projects, or just a cynical fellow traveler in the Andrew Cuomo mold — looking for a leg up in a cobalt-blue environment?

Well, she’s from Buffalo — Democrat country but hardly progressive turf — and she’s a once-upon-a-time darling of the National Rifle Association. And how many former Erie County clerks have hard-left views, anyway?

So let’s go with a cynical fellow traveler in the Andrew Cuomo mold — a lady who knows better but who embraces the lefty line anyway.

Small wonder, then, that some polls show a tightening race. Yes, it would take a seismic realignment for Hochul to be defeated by Republican Lee Zeldin next month — but that’s what they said about state Sen. George Pataki until New York woke up to Gov.-elect Pataki on Nov. 9, 1994.

The electorate was sick of a lot of things back then, and violent crime was right at the top of the list. Gotham voters had installed Rudy Giuliani in City Hall the year before — and while Eric Adams certainly is no Rudy, he was the tough-on-crime Democratic mayoral candidate last year, and he won.

So maybe there’s some hope for Zeldin. That is if he can make New York voters understand that there is scant hope for safer streets without a determined advocate in Albany’s Executive Mansion.

New York is, constitutionally, a strong-governor state. Incumbents have enormous power, even when faced with a hostile Legislature.

But only if that incumbent has the technical savvy, and the will, to pull the right levers — and then weather the inevitable blowback. Hochul falls short on all three counts. And that’s why the Green Goblins are winning.

Safe streets? It’s up to you, New York, New York.