Gov. Hochul is using your money to try to buy an election 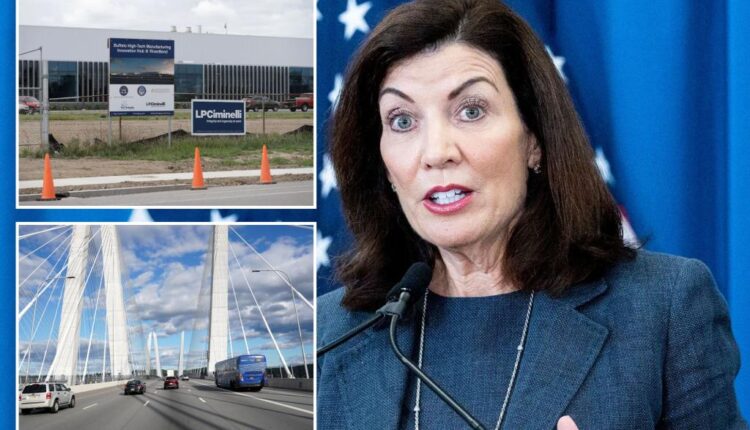 Are you enjoying Gov. Hochul’s campaign for governor? You had better be — because you’ll be paying for it for a long time. The governor is spending lavishly to make herself popular — and she’s spending your future tax dollars to do it.

Once again, Hochul is proving she learned well from the master. Former Gov. Andrew Cuomo was famous for plastering every corner of New York state with taxpayer money, no matter how ill-judged the purpose — remember the “Buffalo Billion” boondoggle? — since the real purpose was to ensure his own re-election.

Now Hochul is out-Cuomoing Cuomo. Her first-ever state budget, enacted in April, featured a last-minute campaign slush fund. The budget included $1.6 billion to spread around politically crucial corners of the state, including $920 million which is earmarked for whatever she wants.

Take Long Island — a classic swing-vote region, where Rep. Lee Zeldin, Hochul’s opponent, has been gaining in the polls, due to fears over crime.

Coincidentally, the Hochul budget includes a $350 million “Long Island Investment Fund,” to be doled out by her Empire State Development Corp., the same entity that wants to raze the blocks around Manhattan’s Penn Station to benefit a single real-estate donor.

Similarly, the biggest chunk of the Long Island fund — $100 million — will go to “large-scale, real-estate development projects.” As usual, New York is getting real estate backward: Developers are supposed to pay taxes, not the other way around, with taxpayers paying developers.

The state is vague about where the rest of the Long Island dollars will go. For example, another $150 million will go to “other projects that must have the potential to develop or redevelop sites into job-creation engines.” That could be, literally, anything.

There’s more of this for other swing-vote areas. Most of the money isn’t to buy votes directly, but to silence potential political opposition.

For example, the prospect of $185 million in “grants . . . to state and municipal government entities or nonprofit organizations for essentially any purpose,” as the Citizens Budget Commission describes them, will keep some local Democrats quiet over rising crime.

It would be one thing if Hochul were going to spend this money on useful infrastructure. Cuomo often — not always — did that. For example, his motives were slightly impure in putting $2.6 billion toward a third track on the Long Island Rail Road, expanding capacity. But long term, New York needed that extra rail capacity, anyway.

Same thing with the Tappan Zee Bridge replacement north of Gotham. It bought Cuomo popularity in the suburbs, but it was also a necessary project.

Moreover, a full $1.2 billion of the government money Hochul is spending to buy political support is borrowed money — when interest rates are rising, not falling, unlike in the Cuomo era. And when the total budget already tops $220 billion!

This Apple Watch Ultra ad is all about the danger