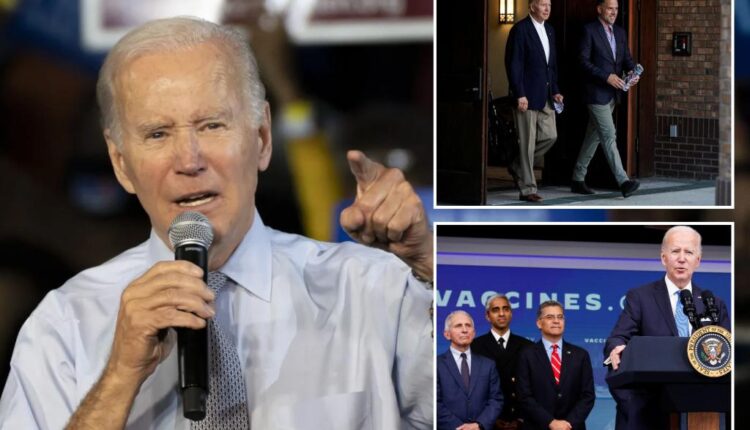 In the movie “The Longest Day,” Maj. Werner Pluskat tried to warn his superior about the approaching armada that he was seeing on the horizon. His superior asks where they are heading, and Pluskat responds, “Straight for me!”

In the days before the midterm “Democratic D-Day,” President Joe Biden has increasingly sounded like Werner Pluskat. And he’s right. While Biden may or may not be the subject of an impeachment, a Republican-controlled House has plenty to investigate, and impeachment is unlikely his greatest fear.

Here are the top three concerns, and there is every indication that Biden is wise to be worried.

House Democrats repeatedly moved to block investigations into the alleged multimillion-dollar influence-peddling operations by the Biden family. For his part, Attorney General Merrick Garland steadfastly refused to appoint a special counsel despite an overwhelming basis for such an appointment.

Biden has repeatedly denied knowledge of Hunter Biden’s business entanglements despite numerous emails and pictures showing him meeting with Hunter associates. Hunter’s partner, Eric Schwerin, alone made at least 19 visits to the White House and other official locations between 2009 and 2015.

There are emails of Chinese, Ukrainian and other foreign clients including some thanking Hunter Biden for arranging meetings with his father. People apparently were told to avoid directly referring to Joe Biden. In one email, Tony Bobulinski, then a business partner of Hunter, was instructed by Biden associate James Gilliar that the Bidens wanted to avoid such references: “Don’t mention Joe being involved, it’s only when u [sic] are face to face, I know u [sic] know that but they are paranoid.”

Instead, the emails refer to Joe Biden with code names such as “Celtic” or “the big guy.” In one, “the big guy” is discussed as possibly receiving a 10% cut on a deal with a Chinese energy firm; other emails reportedly refer to Hunter Biden paying portions of his father’s expenses and taxes.

An investigation into the alleged influence peddling by Hunter, his uncle James and his father could reveal additional information of how foreign interests pumped millions into the Biden family. As we learn more of this influence-peddling operation, the FBI may face increased questions over its response to the allegations as well as many in the media, who were actively involved in burying the story before and after the election.

The president has at times acted as a virtual censor-in-chief, denouncing social-media companies for “killing people” by not censoring enough. Recently, he expressed doubt that the public can “know the truth” without such censorship by “editors” in Big Tech. There is growing evidence of long-suspected back channels between government and Democratic political figures and Big Tech. Some of those contacts were recently confirmed but Congress again refused to investigate.

If officials coordinated the censorship of citizens, it could lead to lawsuits (in addition to already pending actions) and embarrassing disclosures. The government cannot do indirectly what it is barred from doing directly. The investigation could produce considerable collateral damage for political and media figures alike.

Republicans have pledged to open a full investigation into what officials knew about the origins and risks of COVID-19. Specifically, members like Sen. Rand Paul (R-Ky.) have pledged to uncover material showing what officials like Dr. Anthony Fauci knew about the lack of efficacy of masks as well as guidelines on limiting groups or the closure of businesses and schools. These investigations might also reveal the coordination of health-care guidelines with teacher unions and political allies.

These investigations could eventually be linked in critical ways. For example, many of those who questioned the efficacy and cost of the massive lockdown were barred on social media (and attacked in the mainstream media). Fauci is accused of quickly scuttling such discussion, and critics point to his own alleged approval of gain-of-function research at the Wuhan lab.

These investigations could also present a serious challenge to Attorney General Garland. Not only will the Hunter Biden investigation shed light on his inexplicable opposition to a special counsel, but Garland has been very aggressive in prosecuting contempt of Congress against Trump officials. He may now face contempt referrals from a new Republican-controlled House and will be asked to show the same aggression against Biden officials or associates.

It is not clear whether Biden’s more personal existential plea moved the needle for voters, but it was arguably his most honest pitch as he contemplated the perilous future if either house flipped to the GOP.