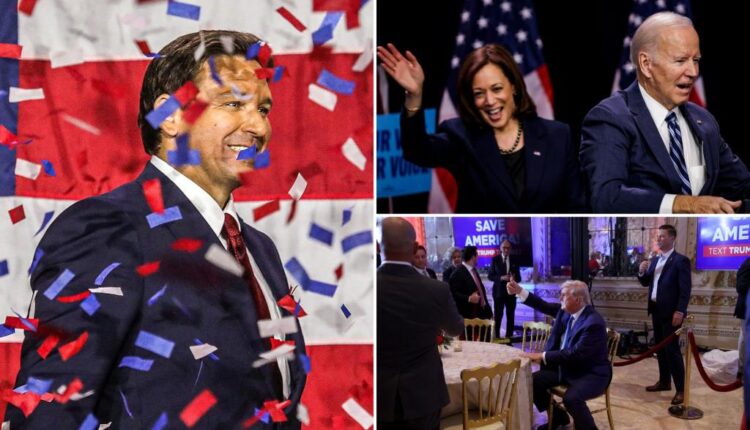 When did it become clear that the predicted red wave would in fact turn out to be a red trickle? To my mind it was around the time of the Supreme Court leak, when the Democrats suddenly had a huge issue with which to ramp up their base.

Because before that what exactly did they have to run on? The cost of living here at home? Their foreign policy abroad, distinguished by the fastest retreat in US military history? All they had was the non-dream team of Vice President Harris, who can’t answer a question, and President Biden, who can’t remember how to stop answering one once he’s gotten going.

In other words, the Democrats had nothing, or next to nothing, to run on. Their only real tool was their insistence that they are the only defense against the “ultra-MAGA,” “semi-fascist” Trump Republicans.

But as we saw, that tactic can work. Just consider how it played out in Pennsylvania. In the most expensive race in the country, Pennsylvanians voted into the Senate a man incapable of speaking. Not just bad at speaking, like Biden and Harris, but almost completely incapable. In any ordinary season, John Fetterman would be a subject of pity and withdrew from the race. As it was, he ran and was voted in. Why? Because he wasn’t the Republican candidate. Such is the state of our politics.

So there was a sigh of relief in the Democrat camp. But I predict that sigh that will not last long. Because as I see it, what happened this week is good for the Republicans.

If the Republicans had indeed got a vast red wave this week then two things would have happened. First, Donald Trump would have claimed responsibility for the success — despite the fact that he hardly even bothered to spend the war-chest of millions he raised in order to support them. A very typical Trump hustle.

Second, he would have used this claim of victory to announce his presidential run in 2024. As it is, Trump’s endorsement was box-office poison for a bunch of candidates, including Dr Oz. In the eyes of Pennsylvania voters, Trump’s endorsement was worse than a stroke. In other states across the country, from Maryland and New Hampshire to Ohio and Virginia, voters came to similar conclusions.

But in the end, this situation is far better for the Republican party than it is for the Democrats.

Had the red wave happened, the Democrats would now be busy trying to work out how to swap out their top team. They would be desperately working out how to stop Biden from running. Perhaps they would start to hold his son Hunter’s prosecution over him. As we know from the Democrat party leaks in 2016 absolutely nothing is beneath that party. They might also be trying to find a way to edge out the universally-disliked Harris. Instead, after this week’s results, the party is stuck with them both.

But the Republicans? Now they know they need a change of scene. Remember ahead of 2016 when the Democrats were worrying about whether Hillary Clinton was really the best candidate to run on their ticket? People pointed to her unfavorable ratings, but the Clinton machine just pushed through anyway. Well the Republicans have got the same realization coming their way now.

Over the last year, they have seen the public losing patience with Trump. His bitching and whining and lying has gone on for too long. The fact that even before this week’s elections he was trying to say he had dirt on Ron DeSantis was just one reminder that Trump has become more a liability than an asset. He doesn’t care about the party. He is only ever looks out for one person: himself. And so the realization gradually lands among the Republicans that it’s time to ditch him.

And while Trump rages around Mar-a-Lago reportedly blaming everyone from the media to Melania for the failure of his candidates, the truth might start to occur — even to him. After this week’s results, he is not the king-maker he hoped to be, but political kryptonite. Whatever good he did in shaking up the Republican party and the country is behind him, tolerance for him is shot.

Of course, you still hear some die-hard Trumpies who say that he has to get a second go at the Oval Office. They say that this time he will know where to attack in DC, will know who are the sleeper agents who screwed up his term in office. But if he really wants someone to blame, he should look closer to home at a president who spent more time channel-surfing than implementing policy.

Meantime, the GOP can come away from this week with only one conclusion: DeSantis’ win in Florida was not just big — it was huge. And it showed what can be done when a young, dynamic leader with all the right instincts and tactics shows he can actually deliver. The thought will be dawning on more and more people.

Perhaps the man who made Florida great again can do the same thing — rather than just promise it — to the country as a whole while Trump recedes into the background. Here’s to hoping.

One ‘Ring’ to bore them all

I’ve finally lain down my sword and surrendered. I cannot watch another episode of Amazon´s billion-dollar floperoo “The Rings of Power.” I love “The Lord of the Rings,” the books and Peter Jackson’s film trilogy. But this Jeff Bezos booboo is the worst thing I’ve seen. By episode two, I was so bored I started watching on fast-forward. By episode five, I stopped completely.

What is wrong with it? Apart from the casting, plot, script and acting, the worst is the wokey preaching. Every hero is a strong woman. Every couple is interracial, so that all the time we are reminded that Middle Earth is an ethnically diverse and equitable place. The whole thing is like a Trevor Noah monologue played at half-speed. Yes — that boring.