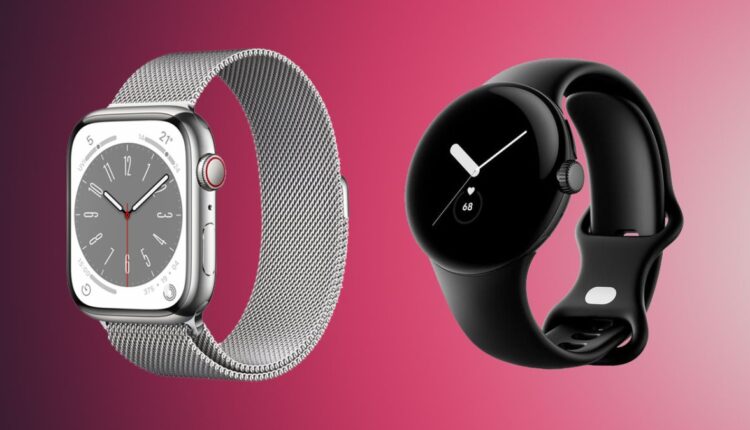 The Google Pixel Watch is the beginning of a new era for Android wearables, bringing solid hardware and great software together to create an appealing Apple Watch alternative.

The best smartwatch in the world

Apple’s experience in this industry which has made the Apple Watch the best-selling watch in the world reflects in its latest models, which are among the best smartwatches you can buy today.

The Apple Watch has held the crown of being the best-selling watch of all time for a while now. That’s among all watches, not just smartwatches. As such, it is understandable that we see competition pop up left and right. The new kid on the block is from Google — the Pixel Watch.

Smartwatches are more than just the sum of their parts. However, given the scale at which these devices exist — trying to fit in a ton of components into a small casing — it can be handy to compare the hardware specifications before making a choice. Here’s how the Google Pixel Watch and the Apple Watch stack up next to each other.

The Pixel Watch and the Apple Watch, Series 8 and SE (2022), have a lot of similarities. This is mostly because we have come to expect a few features from a smartwatch, which have been pushed by existing smartwatches including the Apple Watch. The Google Pixel Watch does a decent job of landing these expectations more or less. You get a single-size option with a 41mm case, which is close to the 41 and 45mm options on the Apple Watch Series 8, and 40 and 44mm on the 2022 SE model. Let’s take a deeper dive into these watches to see which one would be the right one for you.

Pixel Watch vs. Apple Watch Design: Round peg in a square hole

When it comes to design, especially watch design, it’s hard to make an objective statement about which one is better than the other. The key difference between these watches is that the Pixel Watch is round, while the Apple Watch maintains the rounded rectangular shape it has had since its launch.

Both watches are good-looking, but the Apple Watch has gone on to have thinner bezels. On the other hand, the Pixel Watch has unusually thick bezels for a 2022 smartwatch. The watch is 41mm in diameter, and the screen is 1.2 inches, i.e. 31mm in diameter. That makes for a consistent 5mm bezel around it. This is thicker than the bezels on the current Apple Watch models. While this won’t be an issue for everyone, it may turn off a few people to the idea of buying the Pixel Watch.

One of the most important aspects of a watch, smartwatches included, is the bands. Apple has been in this space for a while and has managed to follow watchmakers by creating its own ecosystem of watch bands. It has a ton of its own watch bands, including collaborations, and third-party makers have brought some great bands to the market too, in all kinds of materials, ranging from nylon to leather. Moreover, there are tons of adaptors available to let you use regular watch bands with an Apple Watch.

On the other hand, the Pixel Watch is hot off the press and currently doesn’t have as many band options. It has a proprietary band connector as well. It will get better over time, we’re sure, and the watch does have a way to use regular watch bands with it, although the process is complicated. For now, the Apple Watch is a much better bet if you like to swap out your watch bands often.

When it comes to smartwatches, performance is a different metric than when we discuss phones. The watch needs to be good at showing the time, running the apps it needs to, and doing it snappily so you’re not wasting any time. In terms of that, you can expect both, the Pixel Watch and the Apple Watch, to deliver.

Apple will have a bit of an advantage here, though. The Apple Watch Series 8 and SE both use the Apple S8 chip, which is the latest generation of Apple’s own lineup of smartwatch chips. This means they’re powerful and efficient. On the other hand, Pixel Watch runs on the three-year-old Exynos 9110, which is not a bad chip, but it is of Samsung’s design, and not Google’s. As such, you cannot expect it to be on the same level as the S8, even though it will get the job done.

Battery life, however, seems to be a hit, at least partially. We had hoped for a better promise, but Google promises 24 hours of battery life, and as Android Central’s Pixel Watch review pointed out, it mostly delivers on that promise. However, the Apple Watch doesn’t quite get there, as our Apple Watch Series 8 review points out. The Pixel Watch thus has a fair bit of an advantage when it comes to battery life. Both watches get battery saver modes to extend the battery life.

Both watches use proprietary chargers. Pixel Watch charges at 5W, while the Apple Watch Series 8 can push between 5W to 20W. Apple Watch SE is slower to charge, taking twice as long to charge as the Series 8. Apple says Series 8 takes 75 minutes for a full charge, while SE takes 150, and the real-world performance more or less lives up to these promises. Google says the Pixel Watch will take about 80 minutes for a full charge, but real-life estimates so far range anywhere between the promised 80 minutes, to 120 minutes.

This is where the picture gets a bit clearer. Apple Watch runs on WatchOS 9, which is the latest version of Apple’s smartwatch operating system. On the other hand, the Pixel Watch runs Wear OS, which has had a rocky journey so far, to say the least. After multiple redesigns and rebrands, Wear OS is finally usable, but don’t expect it to be anywhere as coherent as WatchOS. However, early impressions seem to suggest that it is more polished than expected.

Fitness tracking is an important part of a smartwatch, and the competition is a bit tough on that end. Apple has years of experience with this, although it has its own share of hits and misses with its Fitness suite. On the other hand is Google, which is relying on Fitbit now, which it had previously acquired. Make no mistake, the Pixel Watch isn’t quite a Fitbit watch, but it has a lot of the good Fitbit bits baked in. Google is even bundling six months of Fitbit Premium with the

Coming to apps, the Apple Watch again has the advantage, with years of development and optimization leading to a refined software experience. Google’s Pixel Watch is a first-generation product, and while it will get the job done with the best apps available for the platform, you can’t go in expecting the versatility that comes with an Apple Watch. It’s a solid start, though, and the software experience is not too shabby, which means that Google can catch up to the Apple Watch pretty quickly if it keeps up the work.

Pixel Watch vs. Apple Watch: Which should you buy?

The Apple Watch is the more refined product, and having had multiple iterations now, is also the more reliable choice. You know what to expect, and it will deliver. However, all the best Apple Watch models come with an iPhone lock-in, which can be a make or break for many people. The Pixel Watch is new and hasn’t had the same progression, but it enforces an Android lock-in as well, which is more of a Pixel Watch choice than a Wear OS choice. So unless you’re planning on switching phones, your choice here is clear.

If you do plan on switching phones, however, the decision is a much bigger one that opens up several other comparisons. For example, if you’re planning to go for the top-of-the-line experience, you’d have to pick sides in the Pixel 7 Pro vs Apple 14 Pro debate first. The decision to pick between the two smartwatches quickly becomes an ecosystem choice thanks to the exclusivity.

The Google Pixel Watch is the new kid on the block, but it has the makings of a great smartwatch lineup if Google keeps it alive. For now, it’s as good a smartwatch as any other out there and holds its own against the Apple Watch.

The best-selling watch (not just smartwatch)

The Apple Watch is the reliable option, with the top hardware, dependable software, and Apple’s ecosystem experience built right in. It offers a ton of choices, but you have to be inside the ecosystem to be able to get in on the fun.