Gamevice Flex review: This might be the best iPhone gaming controller, ever|replace({“|”:”|”}) 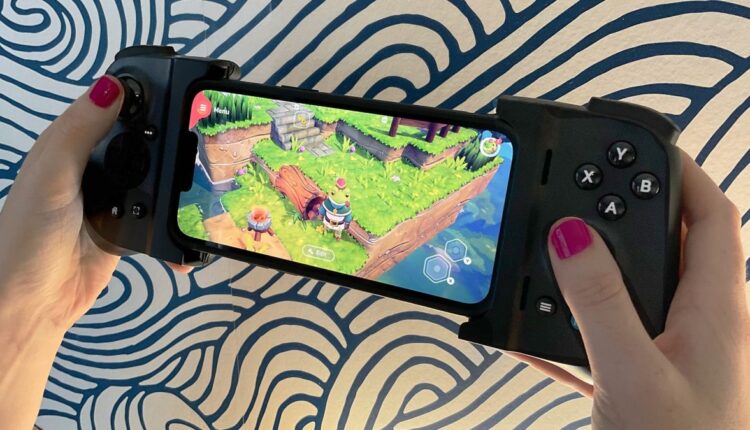 Between Apple Arcade, Netflix Games, and the wide world of App Store titles, iPhone gamers are spoilt for choice when it comes to titles to play on their smartphones. On top of that, the nascent rise of game streaming platforms is leading to an increasing number of controller and case manufacturers building out fully-fledged physical controllers to accompany an iPhone gaming session.

Pretty much all of them come with one frustrating, inconvenient flaw however. If like any sane person would, you have a protective case around your expensive iPhone, you’re almost certainly going to need to remove it in order to use these iPhone game controllers and gaming cases. Taking them on or off with any regularity is enough to make you give up on the whole thing entirely.

Enter then the Gamevice Flex, which pretty much comprehensively solves the problem. An extending, wrap-around case with all the sticks and inputs you’d expect from a modern console controller, it’s designed in such a way to accommodate almost any iPhone you throw at it — even if they’re wearing a protective case over the top of Apple’s slick hardware.

And it rocks. Read on for why the Gamevice Flex may well be the only game controller your iPhone, be that mini or iPhone 14 Pro, will ever need.

[Note that there’s also a USB-C version of the Gameflex Vice designed for Android phones. It’s nearly identical, though we’ll be specifically looking at the Made for iPhone version of the Gamevice Flex, with our testing mostly carried out using an iPhone 13 Pro wearing a Mous hard case.]

The Gamevice Flex is available for pre-order now, going on sale fully on October 25. The iPhone version costs $109.95, while the Android version is priced at $99.95, with both shipping with a month’s free trial of Xbox Game Pass Ultimate (needed for Xbox game streaming), which can be activated by first-time subscribers.

That’s a fair price for a deceptively-complex product, being well built and compatible with such a range of devices. That’s just a tad more than you’ll pay for the Razer Kishi v2 or GameSir X3, which both follow a similar design philosophy, but lack the device flexibility of the Flex.

Gamevice Flex: What I love

If you’re familiar with the original Razer Kishi, you’ll know exactly what to expect from the Gamevice Flex — at first glance, they look near-identical, and that’s through no design espionage tactics: Gamevice was initially partnered with Razer for the original Kishi design. Going solo for the Flex, Gamevice has made some smart additions to make the controller concept it’s own.

The Gamevice Flex sees two halves of a controller attached by a small bungie clip on the back of the device. Release the clip, and you’re left with an expandable opening to slide your iPhone into. There’s a Lightning port to power the controller from your phone’s own battery (the power draw was so minimal as to be almost unnoticeable).  The phone plugs in, and when once it is sitting snugly inside, the two halves of the shell clamp around your device as the expanding rubber connecting the two sections contracts.

So far, so much like the Razer Kishi. But where the Gamevice Flex makes smart changes is in the size of its cavities for your iPhone. They’re considerably larger than similar devices, and this is by design. While initially, it may seem like your phone will slide around uncomfortably between the ends of the Gamevice Flex, also in the box is a selection of numbered inserts that clip into the inner crevasses of the controller, padding out any excess gaps between your phone and the Flex.

There are dozens of these different inserts in the box and, along with a color coded fit-testing card, you’ll be able to find the perfect fit not only for your phone, but for your phone while it’s got a case attached too. We got everything up to an iPhone 14 Plus with a Casetify shell case into the Flex without issue — though cases with overly-large protective corner bumpers may be beyond its capacity. Gamevice has distinct inserts for when you’re using a protective case and just your phone too, with a non-abrasive plastic used to avoid scratches for when your nude phone is inserted into the shell.

It’ll take a little bit of experimentation to get the perfect fit for your phone, but I managed to find the right combo for my setup within about 10 minutes. After that… I never had to take my protective case off to play games on my phone again. It doesn’t sound like a big deal, but it really ups the convenience of a fully-fledged mobile gaming session. It’s a genuine game-changer.

All this would be a bit pointless if the controller itself was rubbish, but for the most part, it is excellent. It features clickable asymmetrical thumb sticks with comfortable resistance and concave thumb tops, the Xbox layout of A, B, X, and Y buttons, analog triggers, and well-placed shoulder buttons. The area where you grip the controller is satisfyingly chunky and curved, making for a more comfortable gaming experience than even the Nintendo Switch and its Joy-Cons, whose flat profile can make extended sessions uncomfortable. But with the Gamevice Flex, I happily played for several hours without issue. Collapsing down to a small 134 x 94 x 37 mm and weighing just 0.36 lbs without your phone, it’s perfectly travel-friendly, too.

Throw in a passthrough Lightning charging port on the right lower edge and a 3.5mm headphone jack (remember those, Apple?) on the left-hand lower edge, and it’s a near-perfect iPhone gaming companion.

Near perfect, though, remember…

Gamevice Flex: What I don’t love

For the most part, the Gamevice Flex does a great job, but there’s a few areas that let it down and stop it being a perfect device.

Firstly, the D-Pad isn’t all that great. It’s too spongy for precision play, which will mean that pin-point platforming or special move attacks will be a bit difficult to pull off with the Gamevice Flex. Likewise, the ‘Home’ button on the controller didn’t seem to do… anything. It’d be good if that could be fixed via firmware to jump back to a user’s home screen without having to swipe at the screen. It took me a little while to realize that the screenshot button on the controller requires a double press to activate, too.

But more problematic is the accompanying Gamevice Live app. As a directory for controller-compatible games, it works OK, highlighting the games and streaming services that work well with the Flex (and walking through set-up instructions for the latter). But it’s lacking polish — it doesn’t automatically collate your ready-to-play games already saved on your device, for instance, and some of the descriptions for apps are just plain wrong. Open the listing for battle royale fighter Final Fantasy VII: The First Soldier, for instance, and the description and trailer link is for the iOS remake of the Final Fantasy VII RPG. Close, but no cigar. You can set up favorites and search in the app, but it’s hard at this point to see why you’d use it over your own gaming folders and the App Store itself. Rival controller Backbone and its accompanying app pulls off the concept with much more success.

I’d also argue that the sizing chart and documentation could be a little clearer in terms of helping decide the best fit for your devices — though it admittedly didn’t take much trial and error to get it working how I’d like it.

There’s an abundance of controllers out there for the would-be iPhone gamer, and though the Gamevice Flex is likely to remain my go-to option for the foreseeable future, there are plenty of solid alternatives to consider.

The pick of the bunch would be the Backbone One, pictured above. It’s a similarly lightweight and portable telescopic gaming clamp, using an extending plastic back to support your phone rather than the collapsible rubber banding of the Flex. I’d say its buttons and D-Pad are better than the Flex, but its sticks and ergonomics are worse by virtue of its overall flatter design.

It, too, is powered by a Lightning port, but it’s much more particular about the size of the devices it can hold and is best used without any case. However, its accompanying gaming hub app is far better than Gamevice’s, making for a more complete package overall. Still, it can’t fit a phone with a case in it, and that’s the key edge the Flex has. The new Razer Kishi V2, which we also liked, follows a similar design to the Backbone One.

For a completely different form factor, try the PowerA MOGA XP5-i Plus. It’s essentially an Xbox controller with a cradle for your phone included in the box and should accommodate most phone sizes. It’s less comfortable, however, as you’re essentially balancing the weight of your phone on the controller you’re playing it with. The split-controller options above are better at distributing the weight — but the PowerA option will let you charge your phone from the controller and play wirelessly with an iPad or Apple TV too. So the form factor has its advantages, too.

Gamevice Flex: Should you buy it?

You should buy this if…

There’s some room for improvement for the Gamevice Flex — but the missteps made here are minor ones. Though the D-Pad leaves something to be desired, the app will likely improve over time. Everything else feels great. By being able to accommodate a wide array of phone sizes and their accompanying cases while remaining ergonomic and comfortable, the Gamevice Flex makes a quick, controller-driven play session on your iPhone a breeze. It comes highly recommended.

Bottom line: One of the best controller cases for iPhone. Period.