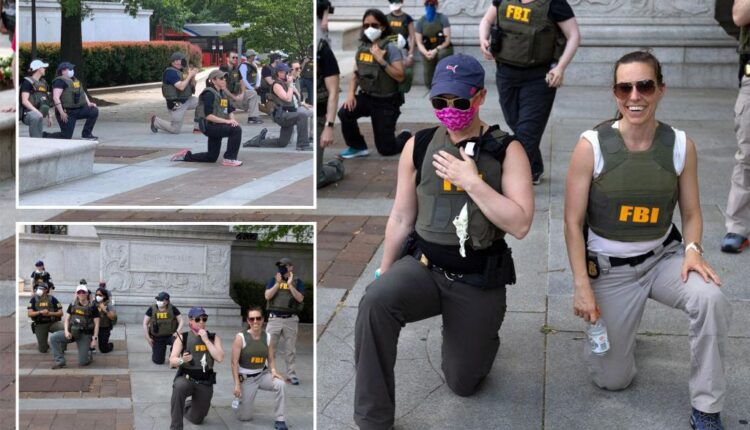 The FBI Agents Association bills itself as “dedicated to advancing and safeguarding the careers, economic interests, conditions of employment and welfare of FBI agents and retired FBI agents.” Founded in 1981, the nonprofit boasts 14,000 members — including 90% of the current agent workforce — and once enjoyed almost universal appeal and respect among them. Once.

With outrageous, political decisions by its board, it has sullied itself just as James Comey, Andrew McCabe, Peter Strzok, Lisa Page and Kevin Clinesmith annihilated the top law-enforcement agency’s reputation during the 2016 Russiagate hoax.

FBI executive management lauded on-duty agents who knelt before Black Lives Matter protesters at the height of the George Floyd unrest and riots for their “de-escalation” efforts, The Washington Times recently reported. A whistleblower said the counterterrorism special agent in charge of the Washington, DC, field office even hugged each of them after the June 4, 2020, incident. While not all the “presence patrol” agents assigned to the scene — which included the Supreme Court and the National Archives — “took a knee” in a show of solidarity or an act of cowardice and capitulation, at least seven did.

And what was the FBI Agents Association’s response to this embarrassing gesture? Well, as the paper reported and FBI insiders confirmed to me, the organization rewarded the kneelers with a $100 “attaboy” — or what it describes as gift cards of “modest value.”

Shocking and appalling on its face, looked at in a larger context, this disgusting decision proves the rot and decay at the FBI is not singularly the domain of some senior officials.

During my 25-year career, I was privileged and honored to work alongside FBI agents who killed or captured Top Ten fugitives and violent, dangerous, murderous felons. To my knowledge, not one of these actual heroes received an FBIAA gift card of “modest value.”

A number of rightly incensed retired FBI agents described in detail to me their unsatisfying email and telephone exchanges with FBIAA President Brian O’Hare. I do not know him personally, and we never served alongside one another. John Wilson, a trusted, widely respected former colleague and retired FBI unit chief who served as one of the attorney general’s handpicked protection-detail members between 2001 and 2007, says O’Hare advised him he fully supported this reward-the-kneelers idea his vice president, Wes Wheeler, proposed.

Wilson shared with me his on-the-record disdain for this defies-credulity action by the FBIAA, an organization that represents all of us within the FBI — both active and retired. The FBI, he says, “has not only circled the drain, it is already in the grease trap by the curb.” The kneelers not only shouldn’t have been rewarded by the FBIAA: They “put themselves and those few agents who knew not to kneel at a severe tactical disadvantage and should have at least been suspended without pay.”

The FBIAA had to realize the two possible, equally repugnant purposes behind the kneelers’ actions. The symbolic genuflection in the face of protesters (and the movement’s rioters who destroyed businesses and government buildings and claimed lives) was either an expression of unity with BLM, or these armed agents were blatant cowards and spinelessly acquiesced to the demands of a threatening mob. Whichever the reason, it is fully nauseating to career agents like Wilson.

It’s further dishonor for an FBI now fully distrusted by half the country. Only 44% of Gallup respondents in 2021 felt the agency was doing an “excellent” or “good” job.

Yet this shameful incident isn’t even the FBIAA’s only self-inflicted black eye. Its first “jump the shark” moment occurred in January 2019. That is when then-FBIAA President Thomas O’Connor posted an open letter decrying the partial federal government shutdown that paused FBI paychecks. Capitol Hill Democrats and their mainstream-media lapdogs of course blamed President Donald Trump. I recall reminding O’Connor that the FBIAA is apolitical and this public pronouncement smacked of partisanship. It was not lost on many of us that the FBIAA never uttered a peep during the Oct. 2013 partial government shutdown — but Barack Obama was president then.

It’s this type of blatant hypocrisy that infuriates many current and retired FBI agents. But we live in troubled times: Hillary Clinton’s home in Chappaqua could be outfitted with a private server containing classified information, with the Justice Department taking her at her word that the destruction of some 33,000 under-subpoena emails only related to yoga routines and Chelsea’s wedding planning. Donald Trump’s Mar-a-Lago residence was subject to an invasive search warrant, meanwhile, even as his attorneys were negotiating with the National Archives about potentially mishandled documents.

The Biden administration and its attack dog — Attorney General Merrick Garland — have been relentless in pursuit of Trump supporters who breached the Capitol and paraded around its hallways like buffoons while Democrats have held no congressional hearings about the anarchy, chaos and insurrectionism of the “summer of love” of 2020: Seattle and Minneapolis police precincts were occupied and immolated, a federal courthouse was firebombed while federal agents were trapped inside and deadly “autonomous zones” were established in Democrat-led cities.

I have come to grips with the fact that my beloved FBI has been irreparably broken by woke activists serving amongst its senior ranks. And with the Justice Department appearing to do this president’s bidding by targeting his political adversaries, it will take a monumental house-cleaning and seismic shift in culture at both DOJ and the FBI to begin to restore America’s trust and confidence.

As for FBIAA leadership, how about some soul-searching and a committed course-correction on which FBI “heroes” you choose to deify and reward with 30 pieces of silver? The kneelers didn’t deserve your pathetic gift cards of “modest value.”

James A. Gagliano is a retired FBI supervisory special agent and doctoral candidate in homeland security at St. John’s University. He also serves on the board of directors for the Law Enforcement Legal Defense Fund.