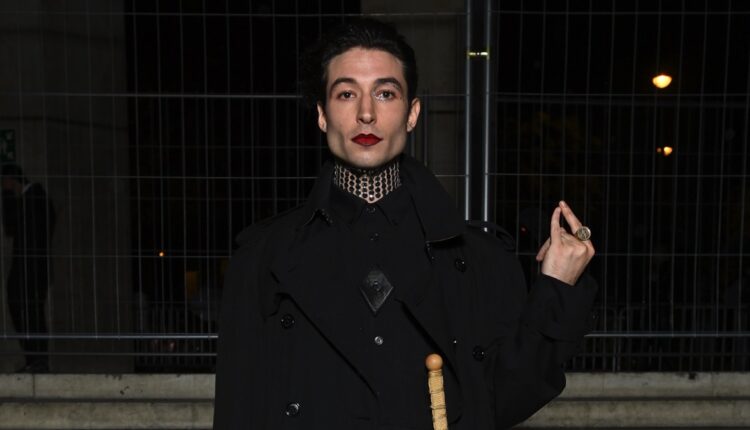 Ezra Miller has pleaded not guilty to stealing three bottles of alcohol from their neighbour’s home.

The troubled 30-year-old actor, who faces 26 years in prison if they are found guilty of the charges, as well as more than $2,000 in fines, appeared remotely at a hearing at Vermont Superior Court, and was told to stay away from neighbour Isaac Winokur.

They allegedly took a bottle of gin, vodka and rum from Winokur’s pantry on May 1 at around 5pm, and Miller spoke only to confirm that they understood the conditions of their bail, including a ban on contacting Winokur and another Vermont resident Aiden Early.

Miller, who goes by they/them pronouns, was also charged with petty larceny over the three bottles, it was reported on Monday. (17.10.22)

Vermont Police charged Miller with felony burglary of an unoccupied dwelling, with the actor claiming they were in the house to look for ingredients for a recipe for their mother.

Miller’s lawyer Lisa Shelkrot said: “Ezra Miller this morning pled not guilty to one count of burglary and one count of petit larceny in Vermont Superior Court and accepted the court-imposed conditions of not contacting or entering the home of the inhabitants.

“Ezra would like to acknowledge the love and support they have received from their family and friends, who continue to be a vital presence in their ongoing mental health.”

Miller has been hit with allegations of grooming after the parents of Native American activist Tokota Iron Eyes, 18, filed a protection order against the actor.

Her parents accused Miller of grooming their child and other inappropriate behaviour with her as a minor from the age of 12, which has been disputed by Tokota.

Miller was also arrested twice in Hawaii in March and charged with disorderly conduct and second-degree assault.

They were accused of shouting and swearing at customers as they sang karaoke at a bar, as well as grabbing a microphone from a 23-year-old woman.

Miller pleaded no contest to one count of disorderly conduct and paid a $500 fine over the incident.

A married couple also took out a restraining order against them after Miller burst into their bedroom and threatened to kill them then left, stealing her passport and his wallet.

And in April the star was accused of throwing a chair at a 26-year-old woman and hitting her at a private party.

A video of Miller appearing to choke a woman at a bar in Reykjavik, Iceland, also surfaced in April 2020, but did not result in any charges.

“I want to apologise to everyone that I have alarmed and upset with my past behaviour. I am committed to doing the necessary work to get back to a healthy, safe, and productive stage in my life.”

iPhone 15 rumors: Everything you need to know