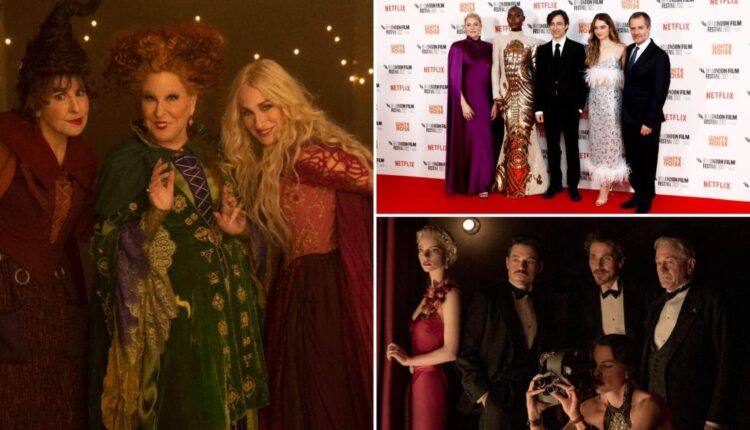 “I’ll sound like a stoned teenager. It’s ways we distract ourselves. Like an M&M’s commercial after plane crash footage? Like showing an Elvis story then a Hitler one? All the same. We flatten our psyches. We don’t want to know we’re on a trajectory that goes one direction.”

Yeah, OK. She lost me at Hitler and Elvis, but the thing stars Adam Driver and Don Cheadle.

And then there’s “Ticket to Paradise.” George Clooney and Julia Roberts play bickering parents off to Bali to talk their kid out of her quickie marriage.

Clooney: “We’re rotten to each other which is funny.”

Julia: “We haven’t the same love issues that 20-somethings have. Great to be our age with a clever story written for us.”

Robbie: “A bucket list I always wanted to work with. No egos on set. Not intimidating. All collaborative and chill. No one to scare you.”

De Niro: “If director David O. Russell wants me part of anything, I make a special effort.”

Myers: “It was like going to acting school An amazing comedy thriller.”

All right already. So go see the thing. Take the NY Post with you.

HAMPTONS Film Fest. Mobs of humanity showed — like all the way from Quogue. “American Masters: Groucho & Cavett” premiered. So would the late Marx Brother Groucho still be able to do his politically incorrect shtick in today’s cancel culture? Says his pal Dick Cavett: “I only know we could use him. We need a lot of political correcting.”

Bette: “We waited a long time. We’d wring our hands. But it’s been bubbling.”

Sarah Jessica: “People connect to this and integrated it into their lives. We feel lucky. We’ll fly wherever they tell us to go.”

Kathy: “The generation-after-generation fervor is surprising. It’s been 30 years, although this is not Stanislavsky.”

FOLLOWING COVID and nearing year’s end, this man made his will: “To nephew Charlie who said health is more important than wealth, I leave the contents of my closet — a sunlamp.”