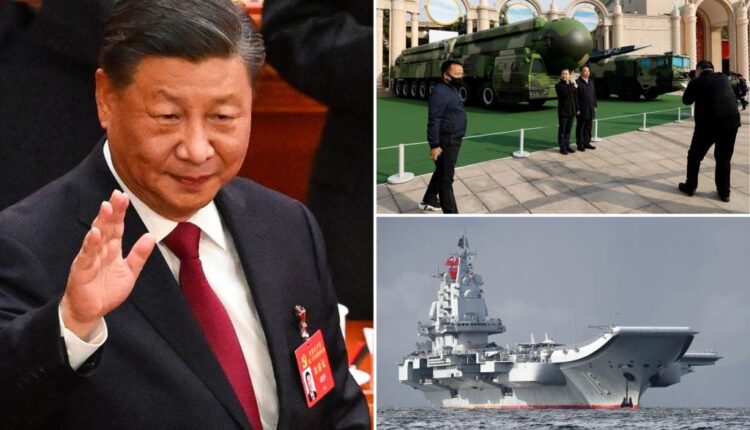 Do yourself a favor: Don’t listen to the rhetoric coming out of the mouth of Chinese President — more like dictator for life — Xi Jinping these days.

Sure, he is talking a big game about China someday reunifying with Taiwan — emphasizing using force if necessary — and how he wants to build Beijing’s military into a world-class power as fast as possible. In fact, in his address to the Communist Party’s 20th National Congress, Xi seems set to be doubling down on his goal of making China the predominant military power in Asia and eventually a global military power as well.

But we should be clear: Xi has been saying the same things over and over for nearly a decade now, and all of that is old news.

What is different now, however, is that the Chinese leader finally has the economy — a gross domestic product worth more than $16 trillion — and foundational military capabilities to back up his bluster.

That should terrify anyone who makes their bones in the Biden administration working on national-security issues. Because China’s military rise has been completely unchecked under both the eight years of the Obama presidency and now under President Joe Biden.

The results are chilling.

For starters, we should understand that this is not the Chinese military of even just a few years ago. Xi has transformed his armed forces into something that could wage war against America in Asia — and would have a chance to win, something unthinkable just a decade ago.

Yes, Beijing is already a military superpower thanks to the development and deployment of thousands of ballistic, cruise and now even hypersonic missiles. If US forces ever tried to mass into any area around China — even as far away as Guam — Beijing could target and attack them relentlessly. It even stands to reason that Washington could see its mighty aircraft carriers, the source of US naval supremacy, sunk in a war with Beijing, meaning thousands dead.

Indeed, Chinese military strategists are proud of the fact that they have clear plans to leverage those missiles in a fight with America. Beijing’s top military minds have talked about a “bolt from the blue” attack in which China launches a massive missile assault on US satellites in the sky, communications nodes, air bases and naval assets all over Asia if war looks imminent.

Striking first would give Xi a major advantage, as China has so many missiles that US missile defenses would be overwhelmed, and most of America’s assets on the ground and in space would be destroyed. That would present Washington with a tough choice, as US forces would have to fight their way into Asia in the event of a conflict, having already taken massive losses.

China’s goal is simple: It wants America to give up the fight thanks to one big knockout punch.

But again, that is just for starters. China now has its own aircraft carriers, three in total, with more on the way. Beijing also is building a fleet of stealth fighters and offering them for export. Xi and company are also developing not one but two new stealth bombers to challenge US dominance in Asia and put America’s air bases under direct threat.

Then there are the nuclear weapons: It seems Beijing wants as many as it can get its hands on these days. Some say Xi intends to double China’s total atomic arsenal to ensure it has a clear second-strike capability, with enough land-based weapons and submarines armed with nuclear weapons to negate any chance of a US first strike.

From here, things will only get worse. While the US military battles about pronouns, China’s only goal is ensuring it can wipe out our forces if war comes. Beijing is investing billions of dollars more in armed forces, building game-changer technology related to artificial intelligence, blockchain, cyberweapons and much more.

Until the Biden administration can truly get serious about the threat China poses, our own military’s capabilities will degrade more and more.