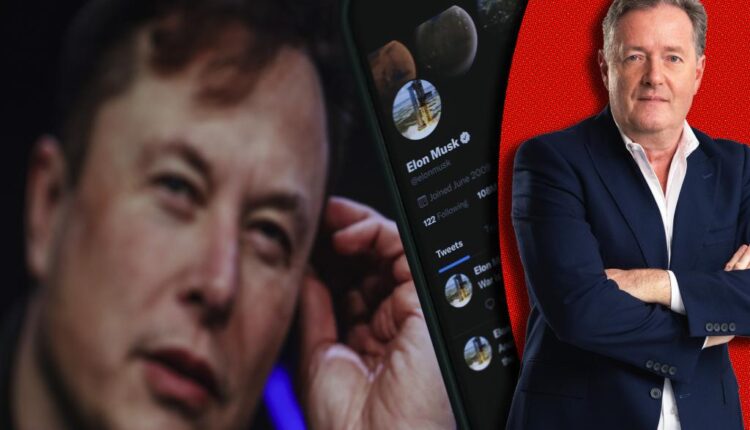 “Stay,” tweeted lawyer and MSNBC commentator Tristan Snell after news broke that Elon Musk had bought Twitter. “Hold your ground like a Ukrainian.”

I’m wearily used to insane statements from the ultra-woke brigade, but this was something else; a supposedly intelligent man was genuinely comparing the purchase of a social media platform by a maverick free speech-loving billionaire to Russian dictator Vladimir Putin’s illegal and barbaric invasion of a sovereign democratic country.

Snell’s hysterical response came in response to the predictable blizzard of left-wing celebrities and pundits throwing their toys out of the stroller and announcing they were quitting Twitter in protest at Musk’s new ownership, including WWE Hall of Famer Mick Foley and former Vermont Gov. Howard Dean.

Call me cynical, but I bet they all come crawling back.

In April, when reports of Musk’s bid first emerged, “She-Hulk: Attorney at Law” actress Jameela Jamil tweeted: “Good thing about Elon buying Twitter is that I will *FINALLY* leave and stop being a complete menace to society on here. So it’s win-win for you all really.”

It would have been, only sadly she didn’t mean it; Jamil’s been tweeting away in her usual irritating way ever since the deal went through.

We saw the same hysteria and hypocrisy when Donald Trump became president in 2016 and the likes of Chelsea Handler, Snoop Dogg, Miley Cyrus and Cher all vowed to leave America in fury and despair, but then all stayed.

So, I confidently predict none of those currently screaming “I QUIT!” will stop themselves from tweeting for long. They’re too addicted to the slavishly approving echo chamber attention and sound of their own permanently whiny voices.

But the ridiculous overreaction to Musk taking over Twitter has exposed a lot of the very issues that the Tesla and Space X genius has identified and wants to resolve.

Most notably, the resolute refusal of many on the left to even countenance being confronted with contrary opinions without wanting to shame, vilify, and cancel those who express them.

As podcast king Joe Rogan said, in praising Musk for wanting to restore a “reasonable exchange of ideas”: “I think we have a real problem with discourse on Twitter. What some would like to do is silence those that have opposing viewpoints, and then you get all this positive feedback from all the people that agree with you.”

This is the same dangerous mindset that has corroded free speech in modern society from university campuses and corporate boardrooms to even the world of humor where comedians are now being physically attacked for cracking jokes.

After the deal was done, Musk tweeted: “Comedy is now legal on Twitter.”

I replied with two laughing emojis and a thumbs up, which he quickly “liked” – the new Twitter equivalent of a papal blessing.

But imagine reading Musk’s tweet and not a) chuckling and b) thanking God that finally someone was going to save us from the hellfire censoring wrath of joyless woke warriors?

And speaking of laughter, it’s been most amusing to see the same people who celebrated Twitter kicking off President Trump now reacting in horror at the concept of him possibly being allowed back.

As conservative comedians the Hodgetwins tweeted: ‘The left went from “Twitter is a private company, it can do what it wants!” to ‘Twitter is dangerous and should be shut down!” all within a week.’

But Musk — who is a Bernie Sanders fan that’s historically skewed to the left politically — would surely be right to lift Trump’s ban?

It’s always struck me as utterly absurd that a recent President of the United States is not allowed to tweet but Russian dictator Putin, Taliban leaders and the Supreme Leader of Iran all still have active accounts.

It’s an unparalleled source of news and commentary, and if you like a good argument as much as I do then it’s debate Utopia.

But there are way too many anonymous bots manipulating political conversation and thus possibly voting preferences, and too many tweets espousing racism, harassment, or death threats.

Musk knows this and wants to fix it.

He’s made it clear he doesn’t want his site to be deliberately misused to fix elections or promote violence and hateful bigotry.

But as a self-acclaimed ‘free speech absolutist’, he does want it to be somewhere that people of all political persuasion, colors and creeds can express themselves freely without fear of being no-platformed or canceled.

Crucially, and seemingly unlike many of the previous Twitter leadership team, he doesn’t instinctively view all conservatives as an unacceptable enemy to be expunged and purged from public view.

Musk was horrified to see Twitter ban the New York Post for publishing a completely true and very damaging scoop, just before the 2020 election, about Hunter Biden’s laptop, calling it “incredibly inappropriate.”

And you can bet all the money the world’s richest man is worth ($223B) that there will be no repetition of this free speech atrocity on his watch.

The great irony of those liberals like Tristan Snell screaming, “Hold your ground like a Ukrainian!” at each other to stop the supposedly aggressive invading oppressor from wrecking their tweeting lives, is that Elon Musk has spent $100 million helping the heroic Ukrainians by providing 20,000 of his Starlink satellite terminals so their military can stay connected in the war even when cellular phone and internet networks have been destroyed.

He doesn’t just talk the talk on free speech and democracy, he walks the walk – while his critics purport to be liberals but behave like fascists.

As Musk said in response to those threatening to quit: “I hope that even my worst critics remain on Twitter, because that is what free speech means.”

And if they still want to leave after hearing him say that, then let them – the squealing illiberal little crybabies.