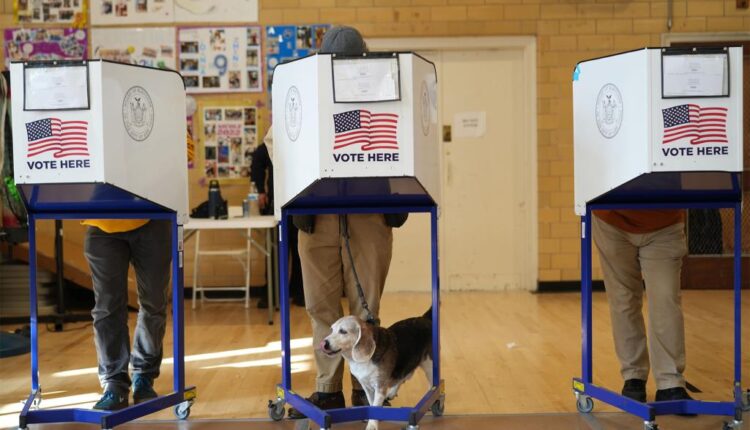 Election Day. The problem is, someone wins.

A new 2023 rule — established due to our current leader — is that all future electees must at least be able to understand English.

As our Godblessus nation careens toward voting booths today, know that the Supreme Court — in their Supremeness — just voted that it is immoral to clone a human being. Unless, of course, the person’s a major contributor.

And to the winners: In case of a national emergency, it must be absolutely essential that we pull Kamala away from watching “Wheel of Fortune.”

With all the vote gathering, speeches, debates and fund-raising, we are now down to three classes: the haves, have-nots and the have-not-yet-paid-for haves.

Winning Republicans say there’s a recession in 2023. Losing Democrats say — “Yeah, but only in the first four quarters.”

America. Greatest country on Earth. Greatest country God ever created. Never may we become agitated by the fever of Putin. Our Washington officials have already put aircraft carriers, combat Marines, Alan Alda and the entire cast of “MASH” on full alert.

Being now multiracial, multireligious, multi-patriotic, multi-international, our electors must learn to devote time to foreign affairs — like handling the Iraq problem, which is now back to Attila the Hun.

Although we are all busy and might forget things — like, for instance, New York’s current mayor — and may his tripe increase — on this day let us honor our very first electee. George Washington. His salary — $25,000. Lots of which he blew on booze. So what. He had the whole Potomac for a chaser.

With today’s voting, let us not work against the lifetime positions of Mitch McConnell and Dianne Feinstein. Nobody cares if their idea of weightlifting is standing up. Nobody cares if they call Biden “kid.” These pols knew Thomas Jefferson personally. Have respect.

Pay attention. Not all who seek power are always nice. Julius Caesar? Knocked off not by a lousy tally of ballots but by his close friend? And his whispered last words to Brutus? “This means you’re out of the Christmas party.”

No matter what person, side or belief wins, may we all come together. All for one and one for all. E pluribus unum. Let every American be thankful that our president finally got something he really wanted — regularity.

When Joe Burden finally announces he will NOT run (nor walk quickly) for president again — comedy writers the world over will demand a recount. There is already a rumor he’s prepped his farewell speech. A long one. He’s onto his third box of crayons.

So God Bless the United States of America — land of the free, home of the craven — and Hunter’s accountants.