Dwayne ‘The Rock’ Johnson admits even his ‘cold, dark soul’ was overcome with emotion by weeping fan – Socialite Life 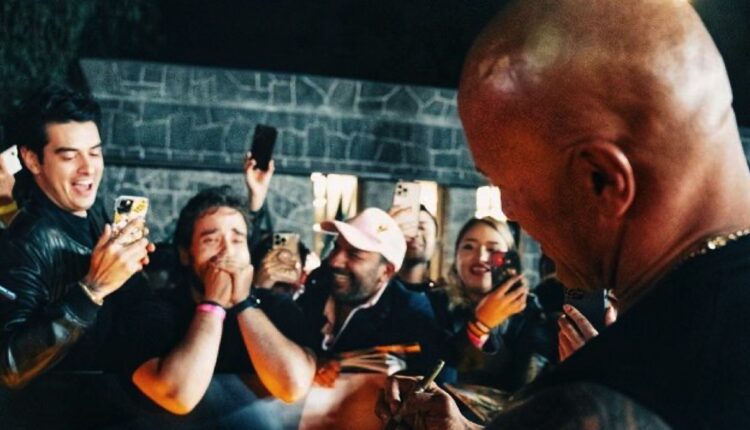 Dwayne ‘The Rock’ Johnson said his “cold, dark soul” was overcome with emotion after one of his superfans wept after getting the actor’s autograph.

The wrestler-turned-Hollywood superstar, 50, made a man cry “tears of joy” by signing his replica WWE replica championship belt at a ‘Black Adam’ fan event at Diego Rivera Museum, Mexico City.

In a video The Rock shared with his Instagram followers on Wednesday (05.10.22), the fan could be seen shaking while looking amazed he was meeting The Rock.

He could be heard gushing: “Thank you! Thank you, Rock! Thank you.”

The performer captioned the clip: “Even my cold, dark soul gets a little emotional when I see people start to break and cry… it’s a beautiful thing.”

He also hailed the upcoming superhero film ‘Black Adam’, due out at the end of October an “electric, fun and emotional” movie.

The Rock also shared a recording from inside the fan event, which showed him being handed a baby from the crowd.

He said: “People do cry and they hand me things – I was NOT surprised to be handed this beautiful little baby.”

The Rock added a heart emoji to the message, before continuing: “Her father caught my attention because he had tears in his eyes when he held her up high and gestured for me to hold her.

“I honestly thought he was holding a toy doll he wanted me to have as a gift. This beautiful, serene, present and trusting angel is Luciana. One day, I bet she’ll inspire all those around her.

“And whatever this moment meant for her emotional father – means it meant something special for me too. Love you back MEXICO and the mana is strong. Girl dads ROCK.”

The Rock will play an anti-hero in the film after he was originally set to appear in the 2019 film Shazam! in the Black Adam role, with his character the main villain.

How the FBI’s nod, wink got social media to censor…

How the FBI’s nod, wink got social…