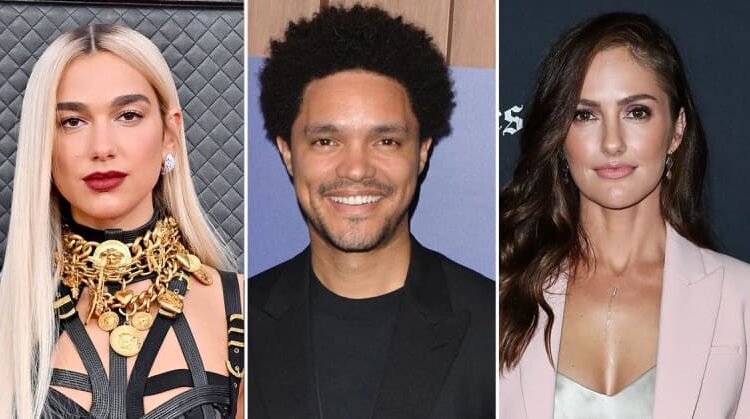 Talk about moving on quickly! Trevor Noah was spotted condoling Dua Lipa just one month after he reconciled with Minka Kelly following their second breakup. The outspoken talk show host, 38, took Dua, 27, out to dinner before kissing her goodnight on Wednesday, RadarOnline.com can report.

Trevor and Dua went out on an intimate date night in New York City and looked all coupled up. The unusual pair hit up Miss Lily’s, a Jamaican restaurant in the East Village, for a one-on-one meal before ending the night with a lingering hug and kiss.

The Levitating singer dressed to kill for their romantic date. Wearing a black bodysuit with plunging neckline, the always fashionable Dua slipped into a pair of oversized jeans, kitten heels, and a leather jacket.

She accessorized with red lips, a snakeskin mini bag, and plenty of jewels to show her wealth.

As for Trevor, he dressed nicely for date night too. Sporting an olive green coat, black jeans, and a t-shirt, the South African comedian wasn’t afraid to show Dua affection, despite being linked to Minka in August.

His chemistry with the English singer was clear at dinner and on the streets after.

In the photos, the two look more interested in each other than the meal. Outside, they sealed the date with two kisses goodbye.

“They were quietly sat away from everyone else at restaurant. It was clear they were into each other and sat close together throughout the meal. They left together and walked, stopping for long embraces and on the second kiss with hugs,” an eyewitness told Daily Mail.

Interestingly enough, Trevor was spotted with his ex on multiple occasions last month, leading fans to believe he had rekindled his two-year romance with Minka after a second breakup in March.

The Daily Show host isn’t the only one who’s been tied to a famous ex.

Dua and model Anwar Hadid called it quits in December after two years together. The IDGAF singer and Anwar — who is Gigi and Bella Hadid’s brother — were facing trouble before the split.

“The couple floated the idea about putting the brakes on their romance last month as traveling so much and being apart is proving tough, a source dished before the breakup news. “Their relationship is going through a crisis and appears to be on the rocks.”

RadarOnline.com has reached out to Trevor and Dua’s reps for comment.