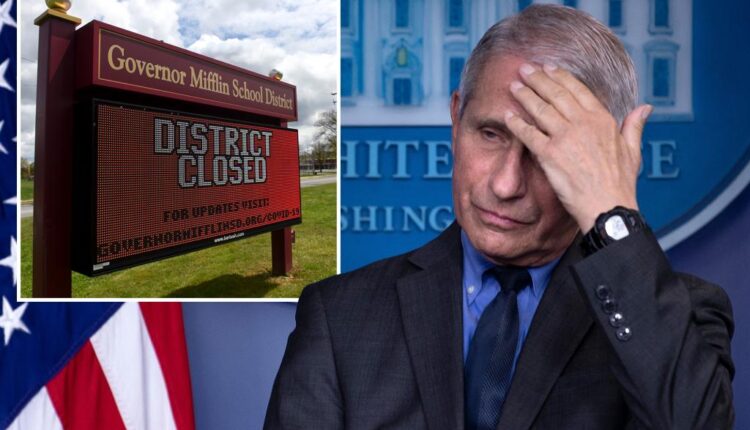 I must admit that I, like most Americans, am deathly tired of having to listen to — or in my case, write about — Dr. Anthony Fauci.  It has been clear for some time that his prescriptions for dealing with the pandemic were not only wrong, but made things worse, much worse.

America’s longest serving medical bureaucrat announced in August that he would be leaving at the end of the year.  (In my view, he can’t walk out the door soon enough.).  But even as he prepares to exit public life—hopefully forever—he is attempting to rewrite history to exculpate himself.

His latest claim is that he “nothing to do” with the nationwide school lockdowns that followed the outbreak of Covid in the U.S.  Nor, he says, is he in any way to blame for loss in learning among public school students that followed the switch to virtual learning.

In a recent interview with ABC News, not only did Fauci deny any responsibility for school closures, he went so far as to claim that he had repeatedly called upon schools to stay open as long as possible.  “No one plays that clip,” he insisted.  “They always come back and say ‘Fauci was responsible for closing schools.’ I had nothing to do [with it].  I mean, let’s get down to the facts.”

Having closely followed the pronouncements of “Mr. Science” over the past two years, I just can’t let him get away with this whopper — particularly as he now warns of two new Covid omicron variants that are “pretty troublesome” and spreading quickly.

The facts are that, from the very first, Fauci was calling for nationwide school closures.  On March 12, 2020, for example, he said, “One thing I do advise … [is] mitigation.  And what was done when you close the schools is mitigation.”

And he did not hesitate to criticize those who questioned his prescriptions, as when he slammed Florida’s governor Ron DeSantis on April 12 for merely remarking that he wanted to get schools back open as soon as possible.  Fauci responded by saying that opening the schools would get children infected with the coronavirus.  “If you have a situation where you don’t have real good control over an outbreak and you allow children together, they will likely get infected.” Fauci insisted.

When Senator Rand Paul (R-KY), who is a medical doctor, said that the data coming in indicated that children were not at risk of severe COVID complications, Fauci warned: “I think we better be careful that we’re not cavalier, in thinking that children are completely immune to the deleterious effects.”

Typically for the wizened virus master, Fauci tries to have it both ways.  Even as he denies having anything to do with school closures, he still claims that it was the right thing to do because it saved lives.  “The idea that this virus doesn’t afflict children is not so,” he told ABC News.  “We’ve already lost close to 1,500 kids so far.”

Fauci’s number is based on a May 2022 study claiming that COVID was responsible for 1,433 deaths among persons 19 and younger.  Critics pointed out that the authors had wrongly counted hundreds who had died with COVID, but not from COVID.  The authors admitted their error the following month, but Fauci apparently didn’t get the memo.

But it is his continuing denials—in the face of overwhelming evidence—that the school closures caused any lasting harm that really raised my blood pressure.  I have grandchildren who clearly suffered a learning loss.  Besides the dramatic drop in reading, writing and arithmetic skills, the social isolation also harmed kids, and some now have mental health issues as a result.

When Fauci was asked about whether school lockdowns were harmful, “particularly for kids who couldn’t go to school except remotely, that it’s forever damaged them?”

Tell that to the kids who went a year or more with virtually no schooling or social interaction at all, suffering severe learning losses that will stunt their lives and even shorten their lifespans.

Or tell that to the kids who committed suicide.

Steven W. Mosher is the President of the Population Research Institute and the author of The Politically Incorrect Guide to Pandemics.

Will We Even Try to Keep Students and Teachers Safe from Gun Violence? Or Just Keep Preparing for the Worst?