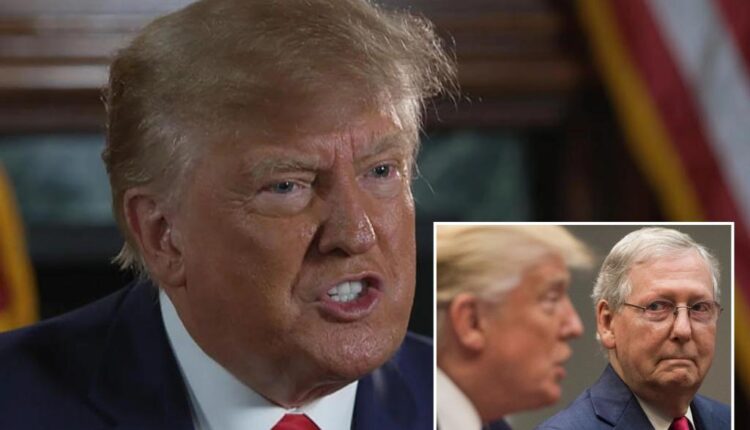 In August, Senate Minority Leader Mitch McConnell told NBC News he was confident Republicans could take the House. As for the Senate . . . “Senate races are just different,” he said. “They’re statewide, candidate quality has a lot to do with the outcome.”

He was absolutely right, of course. Candidate quality gave Democrats control of the Senate again, and forced a runoff in Georgia.

In Arizona, for one, McConnell had wanted popular Gov. Doug Ducey to run. But ex-President Donald Trump had slandered Ducey, vowing to oppose him every step of the way because he had refused to illegally overturn the results of the 2020 election. So the GOP got Blake Masters, who just lost to Democrat Mark Kelly.

“Spending money to defeat great Republican candidates instead of backing Blake Masters and others was a big mistake,” Trump “truthed.” “Giving 4 Trillion Dollars to the Radical Left for the Green New Deal, not Infrastructure, was an even bigger mistake. He blew the Midterms, and everyone despises him and his otherwise lovely wife, Coco Chow!”

Pretty much every word out of Trump’s mouth these days is a lie, but it’s worth unpacking this particular bag of bunkum.

First, though the relationship between Masters and McConnell was indeed fraught, the Senate Leadership Fund spent $8 million in Arizona in October alone.

You know who didn’t spend a lot of money? Donald Trump. Sitting on a warchest of $92 million, he spent just 22% of it on the midterms nationwide.

Trump allowed Masters to send out a fundraising message to the former president’s donor list in late October. The split? For every dollar donated, 99 cents would go to Trump, 1 cent to Masters.

As for the spending bills, McConnell did help get an infrastructure bill passed, which was $1 trillion, not $4 trillion, and supported by a number of Republicans who are now touting projects in their home states. The other “Green New Deal” funding Trump alludes to? McConnell opposed it, but he was powerless to stop it. Why? Because Donald Trump sabotaged the Georgia runoff elections in early 2021 and Republicans lost control of the Senate.

Then there’s a racist cherry on top, where Trump smears his former Labor secretary.

All but one of the “America First” slate of election deniers you endorsed lost. Your key hand-picked Senate candidates lost. Your obsessive fixation on trying to prove a lie — that the 2020 election was “stolen” — even hurt the GOP in statehouses, as  Democrats gained ground in Pennsylvania, Michigan and elsewhere.

All while the enormously unpopular, incompetent President Joe Biden sits in the White House.

The election should have been about him. Instead, you made it about you. And since you made it all about you, you are the only one to blame.