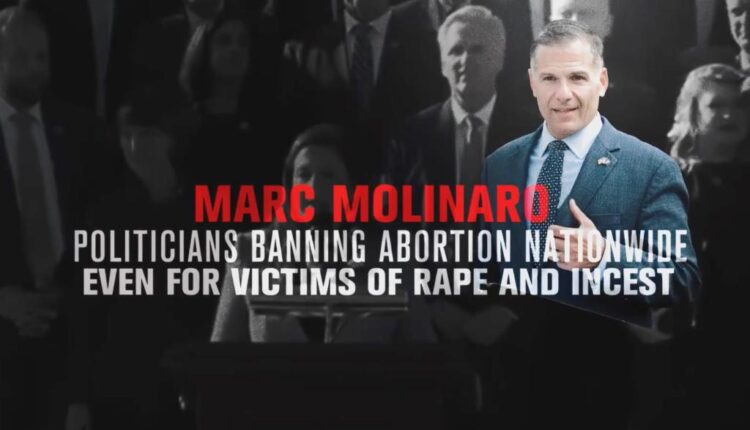 Democrats are so desperate to make every race this year about abortion and nothing else that they’re telling outright lies. Take the ads from the Democratic Congressional Campaign Committee labelling Marc Molinaro an “extremist” on the issue to promote Josh Riley in the Hudson Valley race for the House.

Molinaro has long said he is personally anti-abortion, but has never backed banning it, aside from concerns about very-late-term abortions that most New Yorkers share. And he explicitly backed passing New York laws to ensure abortion would not be criminalized if the Supreme Court tossed Roe v. Wade

Yet the DCCC ads claim he opposed the state’s Reproductive Health Act when he wasn’t even in the Legislature when that law passed in 2019. They insist he backs a national abortion ban when he’s explicitly rejected the idea, including in a debate earlier this year.

The ad even photoshops him into an image at an event he didn’t attend with Rep. Elise Stefanik, who’s markedly more pro-life.

Meanwhile, flyers flatly lie, “Marc Molinaro opposes a woman’s right to a safe, legal abortion. In Congress, he would try to end our access to abortion, even in cases of rape and incest and for the health of the mother.”

On top of all this, this is a House race, and the Supreme Court ruling nixing Roe sent the issue back to the states, likely precluding any federal abortion ban. (Nor does any serious analyst see a chance of New York limiting abortion rights any decade soon.)

Josh Riley should demand that the DCCC (headed, by the way, by sleazy NY Rep. Sean Patrick Maloney) pull the misleading ads and call on local media to reject them.

And voters in every race across the nation should ignore the desperate Democratic drive to distract from the real issues this fall, starting with crime, inflation and the sagging US economy.

City Council move to ban solitary would be a disaster

By declaring a killer ‘mentally ill,’ officials dodge all accountability