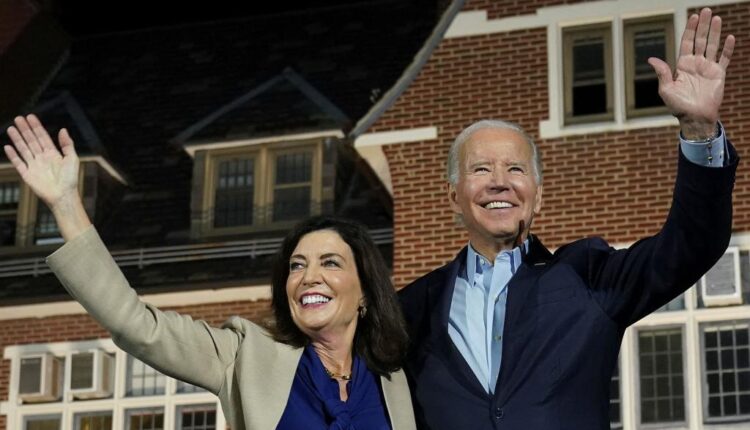 ‘No more [oil] drilling!” President Biden shouted Sunday night in response to a heckler at a rally for Gov. Hochul in Yonkers. Across the nation, hundreds of Democratic candidates screamed in frustration.

The gig was up. In one quote, Biden managed to rip off the fake mask of moderation most candidates have adopted before Election Day.

Biden and other Dems have spent the past few weeks claiming they were for energy independence. Senate candidate John Fetterman even insisted he was for fracking in his debate with Dr. Mehmet Oz, reversing his previous position.

Then the president revealed the truth: They are the same anti-oil party as ever. No drilling. They will be raising your heating prices this winter.

The same thing happened on crime. Faced with a surging Lee Zeldin, Gov. Hochul briefly pivoted from “why is this important” to “crime is an issue.”

Then Bill Clinton pulled a Bill Clinton. Zeldin, “makes it sound like Kathy Hochul gets up every morning, goes to the nearest subway stop, and hands out billy clubs and baseball bats,” Clinton said to laughs from the crowd this past weekend.

The fake concern about crime was out the window, the mask dropped, and Democrats were back to the “it’s no big deal” despite a rise in terrifying random attacks.

Perhaps the most shocking “mask drop” of 2022 is the revelation that many Democrats believe Americans are unfit to judge the politicians who increasingly domineer them.

When they cast their ballot, citizens are being told not to vote on issues like school shutdowns, vaccine mandates, the perils of a soaring federal debt or the impact of 5 million Biden-era illegal immigrants. No matter how much opportunity, prosperity, or freedom that citizens have lost in the past two years, it would be selfish or petty to consider such matters on Election Day.

Instead, according to Biden, former President Barack Obama and busloads of pundits, Americans should vote as if “democracy” is the only one issue on the ballot. And the only way that democracy can survive is if voters ratify all of the power that Biden and his Democratic allies commandeered over their lives.

Almost 250 years after the Declaration of Independence, will self-government be defined down to mindless obedience to a faltering commander-in-chief with scant concern for either candor or the Constitution? Behind the mask, it’s base partisanship.

The Royals favourite classic cars as seen in The Crown