Democrats, the problem is you, not Jay Jacobs 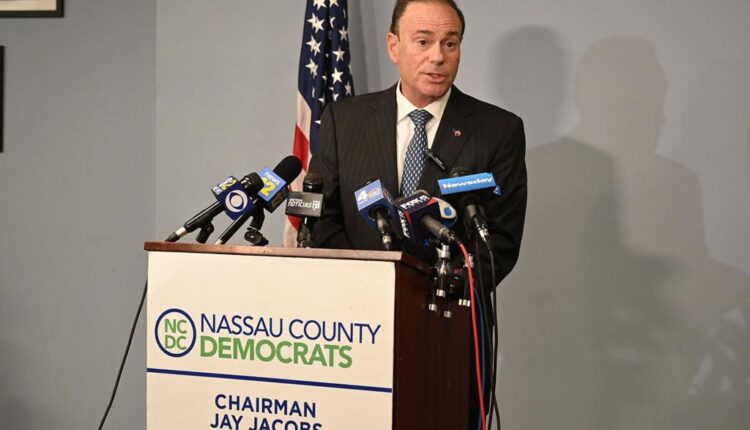 Some people are slow learners.

With New York Republicans flipping congressional and legislative seats and coming close to winning the governor’s office, Democrats should be engaged in soul searching about how their far-left policies alienated many voters. Instead, the far-left is blaming moderates for the party’s performance.

Appointed by former Gov. Andrew Cuomo, Jacobs has tangled with the left before and is fighting back, saying he won’t quit. Surprisingly, he has an ally in the current governor.

Although more than 1,100 lawmakers, party officials and activists signed the letter, Hochul rejected it, saying: “I think he did a great job as chair. We’re not changing anything.”

Good for Hochul — if her rejection is a sign she is preparing to pivot away from the policies of the crime-coddling left that she embraced and that nearly led to her defeat. Her defense of turnstile-justice laws that sparked more violence and disorder throughout the state gave GOP challenger Lee Zeldin an opening he seized to almost pull off an upset for the ages.

Hochul won by 52% to 47%, a relative nail-biter compared to the last four Dem landslides, where no Republican got more than 40%. Hochul also helped her opponent by rarely campaigning until the end, giving him plenty of running room and air time.

Although he fell short, Zeldin’s strong performance helped to lift GOP candidates down the ballot. Republicans flipped four House seats, giving them 11 of the state’s 26, and made small gains in the Legislature, where Dems retain big majorities.

Even those results can be blamed on Dems’ foolish overreach. Recall that Hochul and the Legislature seized redistricting power from an independent commission, only to have their redrawn lines rejected by a court as excessively gerrymandered.

The final lines drawn by a neutral special master gave the GOP a fighting chance and voters responded by sending more Republicans to Washington and Albany.

Not incidentally, the four congressional pickups were a major factor in the GOP’s likely capture of a narrow House majority.

So Dems have reasons to be unhappy, but they are looking in the wrong places. The answer is in the mirror.

They are failing at the primary responsibility of government — to keep people safe. The crime wave sweeping the state is now in its third year and they seem unfazed.

Albany also created a tax structure that incentivizes high earners to move to Florida and other low-tax jurisdictions.

New York schools are another problem, and the decision first by Cuomo and then Hochul to keep schools closed for much of the pandemic was a sop to unions but led to setbacks for many students who were already underperforming and contributed to mental-health issues for many young people.

Finally, Albany has created a regulatory system that is hostile to energy production and business in general.

It’s a grim picture of what’s wrong with New York, yet not a single one of those facts is mentioned in the letter demanding Jacobs’ head. It’s as if the signers live in an alternative universe.

Well, come to think of it…

Their claim that more of the same left-wing nonsense, such as defund the police and higher taxes, is the answer to the GOP surge is belied by the fact that Dems enjoy a better than 2-1 advantage over Republicans among registered voters. It’s their voters who didn’t turn out.

Just 36% of those registered voted in the five boroughs, where Republicans are outnumbered 7-1. Turnout was above 50% in the rest of the state.

The key issue to watch going forward is how far Hochul returns to her moderate roots. Unsteady when she replaced the disgraced Cuomo, she began by fundraising from his real estate and business donors and positioned herself as a born-again lefty.

Those were safe moves, given the progressive wing’s outsized presence in the Legislature and among party activists. The first fruits were that Hochul fended off primary challengers to win the nomination.

But after that, she seemed almost inert and played it too safe even as public fears about safety surged.

Mayor Adams, elected on his promise to tackle Gotham’s crime craze, asked her for help. She agreed but when the Legislature mostly said no, Hochul folded and became a defender of the too-lenient laws she had tried to change.

Adams also was quiet on the issue, perhaps to protect Hochul and not help Zeldin. But now comes a new test for both the mayor and governor.

The city, and the whole state for that matter, cannot continue to accept the high crime levels as the new normal. In the city, murder and shooting victims are down by about 13% from last year, but total major crimes are 28% higher than in 2021 and 32% above 2020.
Transit crimes remain a shocking 38% above last year’s total. And police mostly don’t enforce shoplifting and quality-of-life laws because prosecutors won’t prosecute them, nor will judges detain even repeat offenders.

So while Hochul got her four years, the great unknown is what she intends to do with it. Will she join with Adams and other law enforcement officials to keep her pledge to work until New Yorkers feel safe?

If the answer is yes, she shouldn’t wait until the new year to start. Each day that passes brings more violence and more suffering and gives more New Yorkers reason to head for the exits.

Readers were passionate about my column that Donald Trump has become a bore, but Desmond Hussey saw a bigger picture.

He writes:“Another casualty of last week’s midterms was Trump’s idea that it was impossible there were so many people voting for Biden in 2020. But last week, multitudes of morons came out to vote for such incompetent clowns as Gretchen Whitmer in Michigan, J.B. Pritzker in Illinois and (God preserve us) John Fetterman in Pennsylvania.

“This changed my view of 2020. Last week’s was a fair election and a full slate of fools are again being sent to Washington and the state houses.
“Sadly, that proves Trump is wrong about 2020.”

As Washington digests election results, the White House might have been counting on a break. But the ferocity of new Russian attacks against Ukraine and with one missile landing in Poland, President Biden is getting a rude reminder that our adversaries also have a vote. The barrage, following Biden’s failure to make any progress on Taiwan during a meeting with China’s Xi Jinping, suggest a new level of testing is coming for the doddering president. We are likely to know soon whether he’s fit to face the challenge against America and our allies.

Apple will start sourcing chips from the United States in 2024