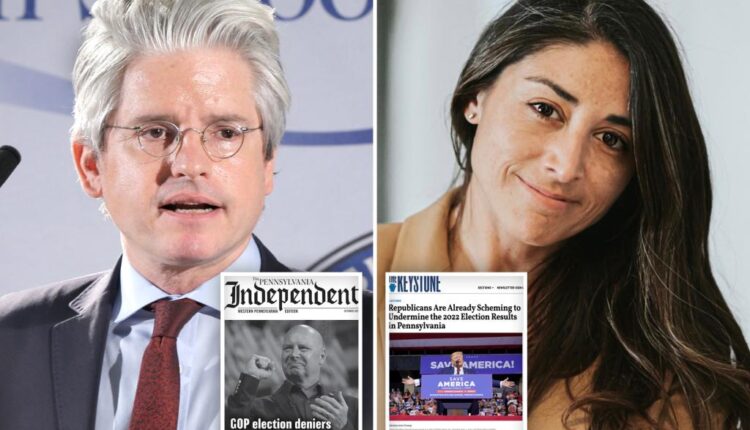 Democrats are campaigning on the claim that the “fate of our democracy” is on the ballot today. They insist that “misinformation” is one of the greatest threats to the survival of the republic. And to “solve” the alleged information crisis and preserve their political power, Democratic billionaires are spending tens of millions of dollars promoting fake news outlets to manipulate gullible voters.

The Left is “faking” some news by disguising partisan advertising as information from legitimate local publications.

Partisan Democratic operatives have hired former liberal journalists to craft stories that attack Republicans in contested races, and then surround these pieces with non-political content. Voters are receiving this propaganda in their mailboxes and on various digital platforms.

The biggest names in the Democratic donor community, including George Soros and Reid Hoffman (whose misinformation efforts have previously helped Democrats flip a U.S. Senate seat in Alabama), are financing many of these opaque information operations.

Two of the most notable agitprop architects are long-time liberal hitman David Brock and a former campaign digital staffer named Tara McGowan. Both operatives practice exactly what they routinely inveigh against. Brock has lamented that “misinformation is an existential threat to democracy,” while McGowan claims her vocational mission is to counter disinformation.

Brock’s American Independent conglomerate, which entails numerous state-level iterations, is in actuality anything but independent. His hyper-partisan network is backed by a reported $28 million budget. It contains affiliated outlets in five battlegrounds: Arizona, Michigan, Ohio, Pennsylvania, and Wisconsin.

The Independent’s physical propaganda physically resembles a local newspaper, and even includes a crossword puzzle. According to The Washington Post, the Pennsylvania iteration of the Independent has a circulation of 953,000 — which makes this partisan rag the most widely circulated newspaper in the Keystone State.

Facebook has removed several of their stories that were boosted in Pennsylvania and Arizona for violating the platform’s advertising terms.

McGowan recently proclaimed to have raised more than $15 million this cycle. Her network has quietly begun unleashing that war chest on social media, with a barrage of advertising across the states where Courier operates. Courier’s targets include Republican candidates such as Ron Johnson (Wisconsin), Dr. Oz, Tudor Dixon (Michigan), and Chuck Grassley (Iowa).

Brock, McGowan, and their defenders claim their media efforts are not “fake news” because they are not literally fabricating information out of whole cloth. But the descriptor “fake news” should still apply because of the deceptive intent. They sought funding in order to electioneer; the façade of journalism is just their preferred vehicle.

After the 2021 Virginia elections, Brock’s Independent ran surveys to measure whether receiving its “newspapers” changed voter behavior. A staffer was quoted boasting that recipients were more likely to vote for the Democratic nominee for governor.

McGowan recently claimed that Courier isn’t focused on electoral results — which is at odds with both her operation’s current advertising and its previous boasts.

McGowan made her electioneering agenda clear while discussing her prototype publication, The Dogwood, in a leaked 2019 memo to “interested parties”: “[The Dogwood] will not only function to support the flipping of both State House and State Senate chambers in Virginia this November, but will serve as a vehicle to test, learn from, and scale best practices to new sites as we grow.”

McGowan’s “moonshot” vision would see each partisan site “pair original reporting and aggregated content with our ad placement and political targeting expertise to distribute these stories to strategic segments of voters before, during, and between election cycles.”

Her plan, in 2019, was to “drive strategic narratives to key audiences” through “targeted ads and boosted posts across Facebook, Instagram, Google, YouTube, Twitter, and other online properties.” She outlined how her “content and political teams” would work closely with Democratic campaigns and aligned third-party outfits.

The key to McGowan’s deceptive practice can be found in her leaked memo’s claim about how her previous work had shown “how much more effective boosting and targeting owned media and news content online was over pre-produced ‘ads’ at influencing a voter’s support for or against a candidate or issue.”

Simply put: If donors wanted to make a wise investment in advertising, they should disguise the ads to resemble actual journalism and let Democratic campaigns reap the rewards. These are not typical functions of any legitimate news agency, and the final bit should disqualify any spin McGowan has ever offered about Courier’s purpose.

Records show that Courier previously spent millions on this “journalism-as-advertising” trick trying to elect Democrats across the country. The type of faux-reporting Courier defends was described by Politico as “mostly a rewrite” of a Democratic congressman’s press release.

Steven Brill, founder of media watchdog NewsGuard, detests what the “condescending” and “self-righteous” McGowan has built. Brill laments that “her life’s work is undermining trust” in the press.

This summer, McGowan held a secret meeting with White House Chief of Staff Ron Klain about how President Joe Biden could benefit from her operation. What was discussed at that meeting remains unknown, but it deserves further scrutiny. It is reported that Biden is about to bless a group called Future Forward to be his official Super PAC. At the end of the 2020 election, Future Forward ran a $100 million TV and digital ad campaign that prominently featured Courier’s “journalism” to help Biden get elected — a role Courier was designed to play.

Many digital platforms have banned political advertising from campaigns in the closing window before the election. It doesn’t take Joseph Pulitzer to intuit that Facebook and other platforms must subject these Democratic operations to the same limitations as those faced by the political campaigns they exist to support.

The next time you hear Democrats crow about the threat of “misinformation,” ask them how concerned they are with their party’s fake news “publications.”

Matthew Foldi is a conservative journalist and former U.S. congressional candidate from Maryland. Twitter: @MatthewFoldi. Reprinted with permission from Newsweek.