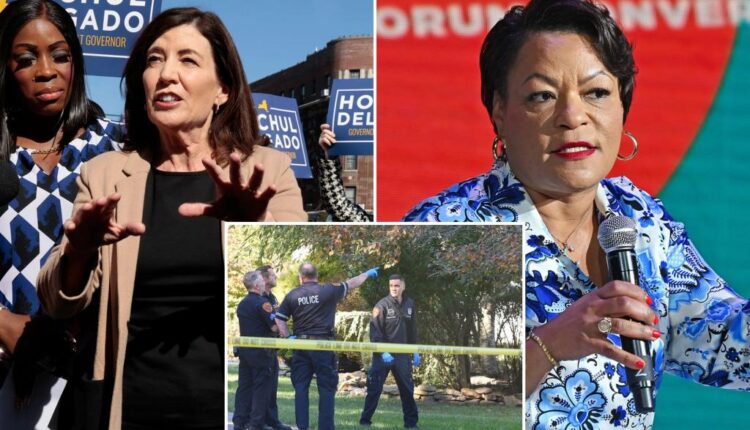 Democrats have no solutions to today’s crime surge. Here’s how they shrug off the mayhem.

“I do not embrace that at all,” said Democratic  Mayor La Toya Cantrell. “It isn’t based on what’s happening on the ground.” She later said that “our city is safer than it’s been in a long time.”

Crime books can be cooked: Curbing arrests can “erase” lawlessness by leaving it unrecorded. But there’s no faking a cadaver. Regardless, Cantrell scoffs at humiliating police data.

Amid all this, Democratic Mayor Lori Lighfoot promoted a karaoke contest via a grating, vertical Tik Tok video in which she sports sunglasses, strides up to a microphone and sings Robert Johnson’s “Sweet Home Chicago.”

The only excuse for Lightfoot’s lightweight response to Windy City chaos: Her dismal musical performance would neutralize criminals. If this works, I will say it first: Lightfoot for president!

Third: Roll out the bromides.

Long Island’s Joel Murphy and Elijah Robinson, 17, were wounded in a drive-by shooting about 2:20 p.m. on Oct. 9, in suburban Shirley. One hid beneath the front porch of Rep. Lee Zeldin, New York’s Republican gubernatorial nominee. Another sheltered behind a bush. A bullet lodged just 30 feet from where Zeldin’s twin daughters, 16, did homework at their kitchen table.

“I’m so pleased no one was injured,” said Crime-spree Kathy Hochul, New York’s hapless Democratic governor. “It’s a reminder we all have to work together to get guns off the streets.”

Hochul’s words are as predictable as low tide. Yes, pistol-packing perps should suffer severe sentences. But 100% gun control would not have stopped David Jakubonis who, last July 21, confronted Zeldin on the hustings, shoved a sharp keychain weapon beside his neck, and said: “You’re done.”

Jakubonis was armed and threatened a congressman. Regardless, he was free the next day before being arrested on federal charges.

Vincent Buccino savored pizza outside a Hell’s Kitchen eatery on Sept. 9. An unprovoked attacker smashed a chair over his head and broke his arm. The unidentified criminal remains at large.

Michael Palacios terrorized a Manhattan McDonald’s on Sept. 16. After harassing patrons, he yanked an ax from his backpack, menaced diners and chopped up a table, chairs and glass wall. He, too, was arrested and swiftly sprung without bail.

Palacios was arrested again on Oct. 11, for alleged graffiti and bicycle theft. Once more, Palacios was freed without bail.

Hochul’s hackneyed “Gun control!” slogan would have done bupkis to foil these and countless gun-free attacks. Had Hochul demanded keychain-weapon control, chair control or ax control, one might respect her originality. Instead, Hochul the Hack spurns criminal control, which would address the evil that undergirds these cases.

Democrats shout, “Racism!” as often as people exhale. They did precisely this when People Who Play by the Rules PAC’s devastating political ad showed doorbell-camera images of three thugs tackling an innocent woman and beating her on a sunny sidewalk in Chicago’s leafy Lakeview district.

She screams for help for 20 agonizing seconds. After a smiling photo appears of Mayor Lightfoot and Governor J.B. Pritzker (D-Ill.), a graphic quietly asks: “Lightfoot. Pritzker. How much worse does it have to get?”

The anti-cash-bail Pritzker — who, like Lightfoot, faces re-election — decried the ad’s “racial tinge” because it shows “apparently black” muggers. But this is Pritzker’s racist assumption. The armed robbers’ hoodies obscure the races of their concealed faces.

Democrats are out of gas on crime. On Nov. 8, voters should hire Republicans to rescue them from the dangerous neighborhood to which the empty-tank Democrats have driven them.