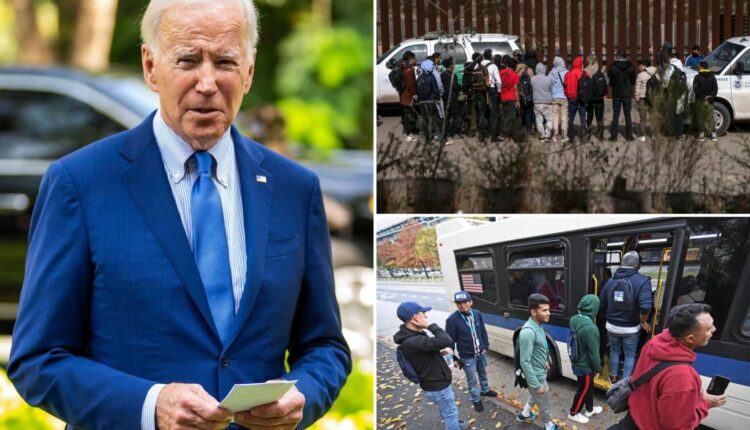 Democrats, from the president to the governor to the mayor, all encourage illegal immigration, then try to fob off the cost onto someone else.

Joe Biden issues an invitation to everyone in the world to cross our border illegally, and then expects the taxpayers of El Paso, McAllen, Uvalde, and elsewhere to deal with it . . . somehow.

Saddled with these costs, Texas ships a couple days’ worth of illegal immigrants to New York and other sanctuary cities, and Mayor Adams and the others cry bloody murder and demand that Texas not transfer the costs to them.

When Sen. Kirsten Gillibrand proposed a gimmick to ship some of New York City’s illegal immigrants upstate, so cities there can get federal money intended to fight urban blight, Gov. Kathy Hochul objects and wants them to stay in the city.

All this happens because the rhetoric of Democratic politicians about the wonders of unlimited immigration is bull, and they know it. New York City’s Independent Budget Office recently estimated that providing services just to the recent influx of illegal immigrants could cost taxpayers $600 million per year.

Overall, about half of families headed by immigrants (legal or illegal) use at least one welfare program. My organization estimates that the lifetime net fiscal drain (services used minus taxes paid) from each illegal immigrant at the federal, state, and local levels combined is nearly $70,000. New York is already home to an estimated 520,000 illegal immigrants, attracted in part by the very sanctuary policies governor and the mayor support. And with a federal judge striking down the only border control policy still being used by the Biden administration (something called Title 42), a lot more will be arriving soon.

Welfare costs for the illegal immigrants themselves aren’t the only costs. While the official unemployment rate is blessedly low, it doesn’t count people who’ve just stopped looking for work altogether. The share of working-age people who are actually working or looking for work (the labor force participation rate) has been declining for some time, especially among men without a college degree. Working-age New Yorkers without a bachelor’s degree saw their labor force participation rate decline from 72% in 2000 to just 63% in the first part of this year.

Immigration isn’t the main driver of that, but it makes it worse. A comprehensive 2016 study from the National Academies found that by increasing the supply of labor, immigration reduces the wages for competing U.S.-born workers, undermining the incentive to work. In addition, multiple studies show that as immigrants move into an area, the U.S.-born tend to move out, indicating that job competition exists.

This decline in work contributes to a host of costly social problems, such as crime, drug addiction, and family breakdown.

In a sense, Mayor Adams, Gov. Hochul, and President Biden all want to be like Martha’s Vineyard — they could keep their “No Human Is Illegal” signs in their yard, but when illegal immigrants arrive, someone else swoops in and take them off their hands. Unfortunately for them — and for the taxpayers — it doesn’t work that way.

Wouldn’t it be easier just to enforce the immigration laws and keep them out of the country in the first place?

Mark Krikorian is executive director of the Center for Immigration Studies.