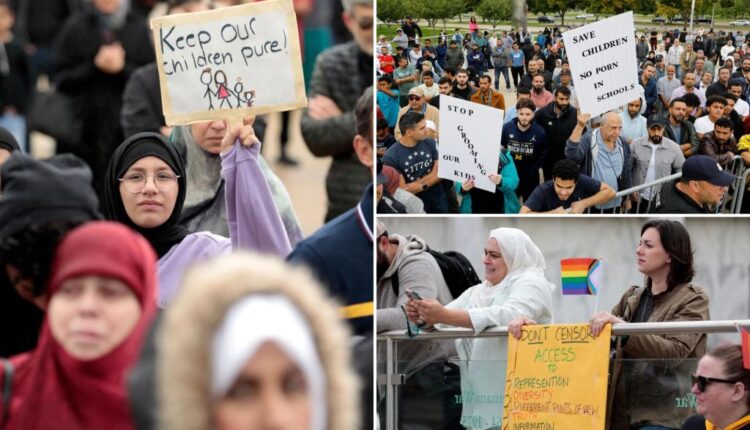 The most perverse in our society will always seek out the most vulnerable, and lately, literary perversion has crept its way into schools and libraries nationwide by means of progressive influence and paid for with our tax dollars.

These perverse actors have attempted to weaponize our parental instincts to protect our children from anything age-inappropriate by claiming our objections are either politically or religiously motivated.

For the last few weeks, Dearborn, Mich., has become another battleground as parents showed up in force to school-board meetings in fierce opposition to books being available that feature highly sexually explicit content and instructions.

One of the books parents particularly objected to, “This Is Gay,” was accessible to students despite giving explicit details on a variety of sexual acts and even offering suggestions on where to find sexual partners.

“I’m a 43-year-old man, embarrassed to say this stuff, and yet you say it’s OK for this to be in the hands of my children. Shame on you,” fumed a father at a recent meeting.

The media and social media’s central focus was aimed at the religious demographics of the residents — Dearborn has the largest Muslim population in the United States per capita. But for me, their religion took a backseat as to what was vastly different at Dearborn versus every other school-board confrontation we’ve seen: The speakers were mostly men.

It wasn’t just fathers who were outraged enough to come and express their opposition to explicit books on school shelves; the community’s elders also made their presence known. Masculine righteous indignation permeated these meetings as men felt schools were encroaching on their community’s children’s innocence.

For the first time since the start of these nationwide school-board battles, I saw men rallying together to make it clear that any action to exploit their children’s vulnerability will receive an equal and opposite reaction. They weren’t cowering in fear of being “canceled” or labeled “toxically masculine” because they’re like most fathers: We would rather risk death than allow our children to remain in harm’s way.

Despite being falsely accused as anti-LGBT because of their Muslim faith, they remained steadfast in insisting that sexual perversion, regardless of orientation, is unacceptable, and they’ll without hesitation fall on the sword of slander to protect their children from it.

While both parents have a duty to protect their children, I’ve seen the lack of male representation at these school-board meetings as a troubling sign for the state of fathers today. Too many have left the burden of protection solely on the mothers.

What is happening across our nation at school-board meetings isn’t a minor squabble over lunch-food selections — it’s about stemming the tide of inappropriate sexual content before it becomes normalized and justified as being beneficial for your child’s education.

The progressive perverts pushing this content are cowards, and the only way they change course is when the public exposes their deeds. But the public can’t be just the attentive mothers.

We need our fathers to take ownership in protecting our offspring from the indoctrination and immorality perpetrated by representatives and employees of the state, and we need our mothers to advocate for their participation as well.

The men of Dearborn led the charge there — and it quickly forced their school district to create a Book Reconsideration Committee, providing a process for parents to challenge the age-appropriateness of books in their district’s libraries. Our most vulnerable need their fathers fighting for them as hard as Dearborn’s.

Our protection is love, and we need to lovingly protect.

New Yorkers are unsafe, Gov. Hochul — stop pretending it’s all in their heads