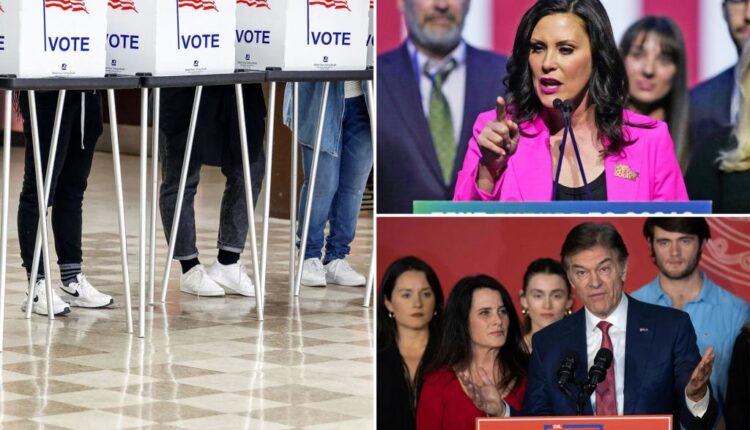 Cynics had another great Election Day on Tuesday. Expectations of a vast red wave became little more than scattered sightings of Democratic road kill. President Joe Biden took a “no red wave” victory lap in a White House press conference Wednesday and promised to make no changes to his policies. It’s hard to improve on perfection — even though his party probably lost control of the House of Representatives and may lose the Senate.

While some commentators hail the results as a reaffirmation of “constitutionalism,” almost all the politicians who trampled the Constitution got re-elected.

Gov. Gretchen Whitmer enraged Michiganders by placing the entire state under house arrest after the outbreak of COVID-19, even imposing a $1,000 fine on anyone who left home to visit family members. She garnered 2.4 million votes, 54% of those cast.

Gov. Kathy Hochul perpetuated the repressive COVID policies Gov. Andrew Cuomo started, including seeking to compel all school kids to get COVID vaccinations that provide no protection for youngsters. Despite her scoffing at New Yorkers’ fears of soaring crime, Hochul received more than 3 million votes, winning 53% to 47%.

Other governors who imposed COVID lockdowns were also re-elected. Is America becoming a Cage Keeper Democracy, where voters merely select the politicians who place them under house arrest?

Before the election, conservative pundits predicted that GOP congressional victories would impose a “restraining order” on Biden. Instead, most of the new batch of members of Congress will simply become complicit in his misgovernment. If Republicans fail to capture control of the Senate, Biden will continue to have a rubberstamp for leftist judges and zealous appointees. The Constitution will continue to be little more than a throwaway line for federal proclamations that almost nobody reads.

In his press conference, Biden declared, “I especially want to thank the young people of this nation.” Biden deluged them with federal dollars to bail out his Democratic allies. His $500 billion+ student-loan forgiveness scheme was widely condemned — even The Washington Post editorial page slammed it as a “regressive, expensive mistake.”

But the handouts helped buy Democrats their biggest boost among voters — a 28% advantage over Republicans in voters age 18 to 29, improving on Dems’ 2020 performance. It won’t matter if federal courts strike down the loan forgiveness as illegal: The votes have already been delivered. (Democrats also did great with the least-recognized swing group, capturing 64% of nonbinary voters.)

Doing his best imitation of Abe Lincoln, Biden declared that he hopes Americans “begin to treat each other with decency, honor and integrity.” Biden is reversing course after his election campaign to whip up hysteria over Republican fascism.

According to an Associated Press analysis, 44% of voters “say the future of democracy was their primary consideration.” This is almost as many as those listing inflation as their top issue. But while federal data confirm the value of the dollar has fallen 13% since Biden took office, there are no parallel statistics to track political fear-mongering. The laudatory coverage of Biden’s “Red September” speech from Philadelphia and his hysterical Union Station spiel last week helped Democrats frighten enough voters to keep most of their power.

At his presser, Biden again whooped up his economic policies as the greatest in American history. Unfortunately, the New York Stock Exchange can’t mail in a late ballot. The Dow Jones fell 647 points Wednesday. Republicans can take solace that at least they did better this week than bitcoin, which plunged below $16,000.

And the election provided plenty of comic relief. The New York Times posted an “evidence-based” infographic on “5 Ways to Soothe Election Stress” — including sticking your face in a bowl of ice water for 30 seconds. That was the only Times recommendation that overlapped with CIA “enhanced interrogation” guidelines for suspected terrorists. The fact that the “soothe” list omitted beer is proof of Times reporters’ and graphic designers’ hopeless elitism.

Though it didn’t show up on the official scoreboard, Democrats lost the “albatross contest” Tuesday. Former President Donald Trump’s cachet took a wallop after he championed bad candidates including Mehmet Oz in Pennsylvania and Herschel Walker in Georgia, potentially costing Republicans control of the Senate — again.

Biden beamed when asked at his press conference whether he will run again in 2024 (he is delaying a formal announcement). Polls — including Tuesday night’s exit polls — show large majorities of voters don’t want to see him on the ballot again. Democrats are unlikely to discover a pretext to hide Biden in the basement again for the 2024 campaign.

The final tally of the 2022 election is not yet in. But there is scant reason for Americans to expect the federal government to become less wasteful, intrusive or deceptive in the next two years. At least the job boom among political humorists should continue.