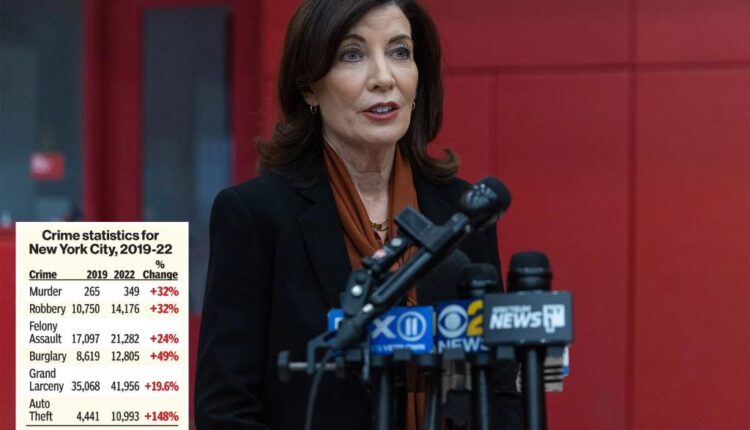 You claim that people who are concerned about crime in New York are “data deniers” and “master manipulators.” You are wrong. Let me remind you of some things. In 2019, Democrats in the Legislature passed a series of “reforms” that took effect in January 2020. They eliminated bail for most offenses, required district attorneys to turn over literally millions of documents to defense attorneys on cases that would ultimately plead out and made it harder to punish people who violated the conditions of their parole. All this was done while you were the lieutenant governor.

What happened? Predictably, after 27 straight years of crime going down from 1993 to 2019, crime in New York City started to rise in 2020. Comparing January to the end of October for 2019 (before these “reforms”) and 2022 (after these “reforms”), serious crime rose 32.4%. The data are below, gleaned from NYPD CompStat reports, which are readily available to you and like-minded “crime deniers” on the NYPD website.

What is your response to this carnage on our streets? “I don’t understand why that is so important to you.” Incredible. You are now responsible for this. You were part of the administration that allowed it to happen, that signed bail reform, which released upwards of 5,000 career criminals from city and county jails across the state in 2020. You refused to bring the Legislature back to fix it. As crime rose in 2021, you signed a bill releasing hundreds of parole violators from county jails across this state. You are doing nothing to stop — or even question — the city’s plan to release thousands more career criminals from city jails to close Rikers Island. Now you are enabling these radical progressives by cavalierly minimizing the problem of crime, as if the more than 25,000 additional crime victims are just meaningless statistical data points.

You claim that “safer states are Democrat states.” It is the Democrat-run cities in Republican states that drive the crime rates. The radical progressive policies of Democratic prosecutors in Chicago, Philadelphia, Baltimore and other major cities have led to major increases in crime in those jurisdictions.

This election is not about abortion or Donald Trump. Abortion will always be available and legal in New York state. It is not about Lee Zeldin’s vote not to certify the electors in Pennsylvania and Arizona almost two years ago. This election is about the safety and well-being of 19 million New Yorkers who are in the midst of a crime wave we have not seen in decades. It is about keeping people alive and safe in their homes and on their way to work. The people of this state have a right to expect their leaders to be honest with them and to do something about rising crime. You just don’t get it. “Move along, nothing to see here” is not an acceptable answer, much less an honest one.

5 Things You Need To Know About Parking Bollards